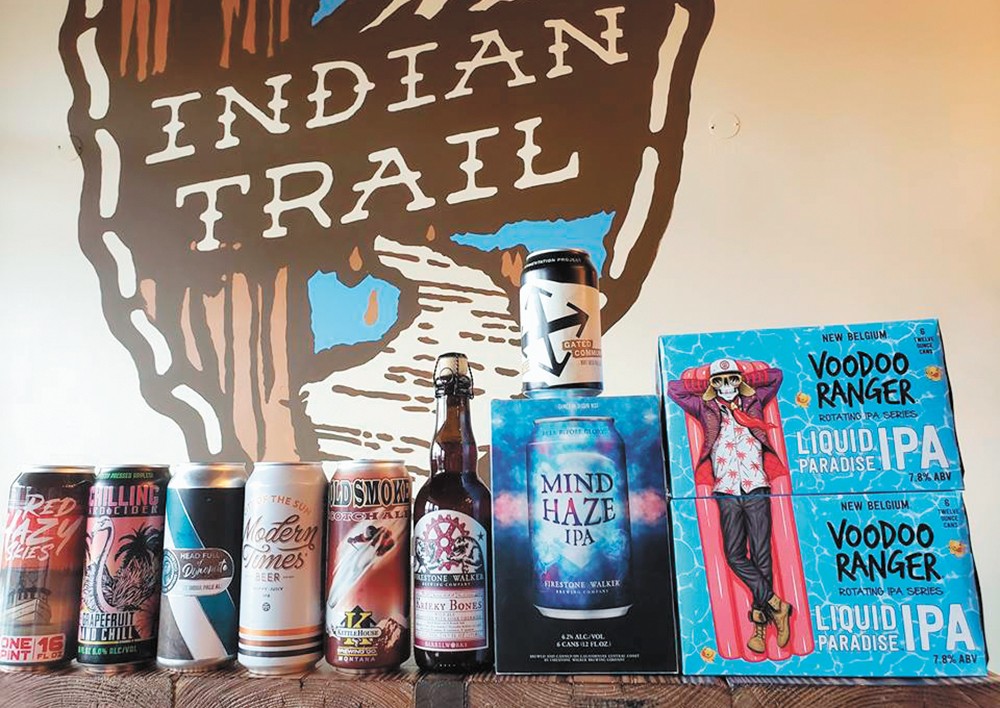 Happy Trails to Brews offers a variety of craft beer and cider.

After a soft opening, Happy Trails to Brews in Spokane's Indian Trail Neighborhood is ready to officially open its doors. A grand opening celebration starts Friday, Jan. 25, at 5 pm and goes to midnight Saturday, Jan. 26. The party features a special craft beer lineup, including multiple limited offerings from Fremont Brewing, like the newly released Sky Kraken hazy pale ale, and the 2017 vintage of B-Bomb, a bourbon barrel-aged imperial winter ale. It may be their first venture into the beer business, but owners Bill and Danielle Reeve have a longstanding passion for the Spokane craft beer scene. Their new watering hole features 16 taps of beer and cider with a focus on regional breweries. Happy Trails to Brews, located at 9025 N. Indian Trail Rd. in the Sundance Plaza, also offers a selection of packaged drinks in the cooler, so you can pop a cold one at the bar or take your favorite six pack home. For more details and hours, check Happy Trails to Brews' Facebook page. (DEREK HARRISON)

If you build it, they will come. That was the plan for Marcy Timblin and Angelina Henry, who figured Sandpoint was due for a bagel shop, so they created Uptown Bagel Co. next to the Pend d'Oreille Winery in the former Tierra Madre juice bar space. And rather than try to recreate a true East Coast bagel — some declare it's the water that makes bagels from the Big Apple so distinct — the duo use New Yorker Bagels from Queens in a range of flavors, including blueberry, sesame, rye and "everything." Go the sweet route with the BananaWhama, a French toast bagel with Nutella, banana, honey and frischkäse, a softer, more spreadable version of cream cheese ($6.50). For savory, try the Stallone, a garlic bagel with salami, ham, roast beef, provolone, red onion, banana peppers and roasted red pepper frischkäse ($9). From the clever menu to the bright, funky décor, Uptown's mission, according to its owners, is to "make more happy people by 2 pm every day with our deliciously addictive hot bagelwiches, outstanding customer experience and '80s vibe." (CARRIE SCOZZARO)

On the evening of Friday, Feb. 1, Bellwether Brewing Co. is hosting its third annual GruitFest celebration timed with International Gruit Day, and featuring plenty of gruit-style beers — that's beer made with blends of herbs and spices and usually without hops — from local craft breweries. This year's participants include Mountain Lakes, Whistle Punk, Republic, Bardic, Genus, the Grain Shed and Young Buck breweries, along with Hierophant Meadery and the Inland Brewers Unite Spokane Homebrew Club. Brewers from some of those establishments have also teamed up to create a Nordic-style fir sahti made with juniper, fir and herbs. Bellwether co-owner Thomas Croskrey says the fir used for the gruit came from the taproom's own Christmas tree. Check out the GruitFest 2019 event page on Facebook for more details as the event approaches.

Also early next month, Mobius Science Center is hosting the next installment of its next Nerd Night series, "For the Love of Beer and Science," on Friday, Feb. 8. Tickets to the 21-and-up event are $25 each, and seats are limited (purchase at mobiusspokane.org). The program offers a peek into the science of brewing with co-hosts Mountain Lakes Brewing and Eastern Washington University, along with beer samples and snacks. Admission also includes access to the center's current exhibits and activities, and additional pints beyond what's included with each ticket will be available for purchase. (CHEY SCOTT)