Cocktails in a can; plus, a new downtown bar, golf course eats and a Seattle restaurant coming to Spokane 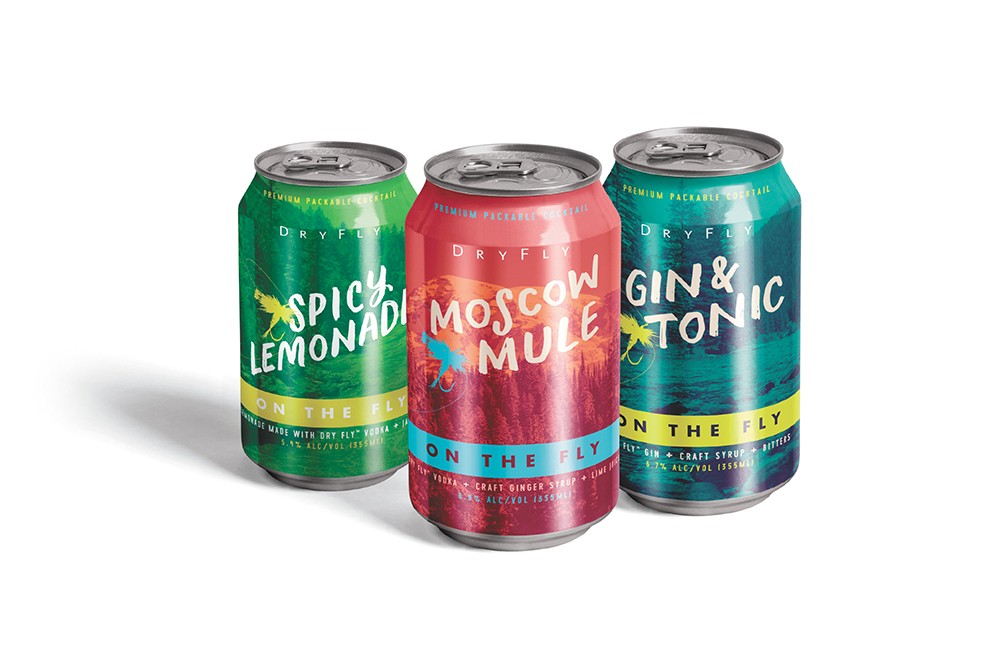 Change things up and grab a cocktail to-go next time you head to the lake or campground this summer. Dry Fly Distilling is slowly rolling out batches of its new line of premade cocktails — a Moscow mule, gin and tonic and spicy lemonade — in 12-ounce cans. Individual cans, coming in between 5 and 6 percent alcohol by volume, are currently available (check the Dry Fly Facebook page for announcements on availability) at the distillery's East Spokane tasting room for $5 each. While the cocktails to-go are being released in smaller batches to test the market, the plan is to eventually ramp up production and distribute to regional retailers, says Dry Fly co-founder Don Poffenroth. The new cocktails were created through a collaboration with Spokane-based Side Hustle Syrups.

"People are looking for an alternative to beer, so having a canned cocktail fits that need," Poffenroth says.

In other news, Dry Fly was forced to reassess its plans, announced last fall, to move into a larger production facility after that space failed a structural engineering test. Now, the distillery is moving its operations to downtown Spokane in the soon-to-be-former Spokesman-Review printing press building at Riverside and Monroe. The new distillery, tasting room and a planned pub are projected to open there in mid-2020. (CHEY SCOTT)

There isn't a lot of golf memorabilia at any of the three existing Capone's Pub & Grill locations, but a lack of interest in golf didn't stop Tom and Teresa Capone from seeing the potential in purchasing Ponderosa Springs Golf Course in Coeur d'Alene. The couple purchased the nine-hole, par-three course last year with plans to refurbish the clubhouse, offering year-round events including KPND radio pint night parties and catering. The clubhouse menu features appetizers like roasted beet hummus and veggies, ($10) Capone's signature chicken wings ($10) and sandwiches, like the grilled tuna with avocado, jalapeno and cheddar cheese ($9). Order one of four salads or a build-your-own burger with a choice of ground chuck and brisket or chicken breast ($8).

"To us it seemed like a golden opportunity," says Tom Capone, who jokes that "if it doesn't work it sure would make a nice house on 12 acres." (CARRIE SCOZZARO)

Seattle-based Shawn O'Donnell's American Grill and Irish Pub is adding a new location just north of downtown Spokane's core, in a spot that was formerly the longtime home of Milford's Fish House. In a Facebook post, the Seattle pub's owners said they'd bought the historic Milford's building at 719 N. Monroe. Milford's closed in February 2018 after nearly 40 years in business, and the restaurant building had been for sale since.

Shawn O'Donnell's flagship location in downtown Seattle is at the base of the historic Smith Tower in Pioneer Square, serving traditional Irish-American fare: fish and chips, burgers, corned beef, shepherd's pie and bread pudding. It has two other locations, in Seattle's Fremont Neighborhood and the city of Everett. The new Spokane location is projected to open this fall. (CHEY SCOTT)

A new bar in downtown Spokane is pairing savory and sweet hand pies (think homemade Hot Pockets or Pop Tarts) with craft beer, wine and other eats. The Pocket Bar is the latest project from regional chef Adam Hegsted's Eat Good Group, with the pastries made by its Doughlicious bakery, and is located at 1017 W. First, in the former Orlison Brewing tasting room.

After celebrating its grand opening July 19, the Pocket Bar's regular hours began, Wednesday through Sunday from 4 pm to close. On the menu are savory pastries ($5-$6), several with comfort food-inspired fillings like ham and cheese, pepperoni pizza, mac and cheese and cheeseburger, along with some internationally inspired combos: Indian samosa and Lebanese fatayer. Sweet pastry pockets ($4) include apple cinnamon and peanut butter and jelly. In addition to pastries, the Pocket Bar also serves several grab-and-go fresh salads ($5.50-$7.50). There's also a fruit parfait ($4.50), a cheese plate and a Greek plate ($8.50 each). For drinks, the Pocket bar serves wine and 16 rotating, regional craft beers and ciders on tap. (CHEY SCOTT) ♦