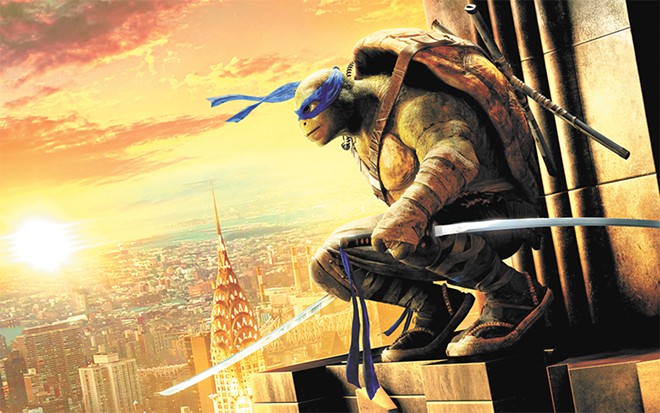 when they debuted way back in the 1980s, were intended as a parody of superhero comics. I picked up this tidbit from the TMNT Wikipedia page. I did not absorb it through some sort of cinematic osmosis while watching the new TMNT movie, Out of the Shadows. That would have been impossible.

Whatever the truth of the long-ago comic-book Turtles, there is absolutely nothing that marks them as satirical here. If a kid bitten by a radioactive spider who develops superpowers is meant to be taken seriously, then why not brother turtles mutated into anthropomorphic form and trained in the martial arts? How is the former perfectly reasonable but the latter ludicrous? If a rich vigilante with a secret underground lair who takes inspiration from bats is offered sincerely, then what's so outrageous about turtle heroes who dwell in urban tunnels and take advice from a rat sensei?

Even a tiny inkling of the absurdity of all such stories could carry a movie like this on a merry path, but there is not a lick of wit to be found here (unless you think spitballs and farts are amusing). Shadows is downright leaden, though it obviously believes there is humor in its loud, chaotic juvenility. It would be an unfair insult to cartoons to call this cartoonish; better to say that it fails to even rise to that level. Simply embracing hoary clichés — the brothers are not only divvied up into the leader, the muscle, the brains, and the goofball, they also argue about how one-dimensional they are — does not constitute comedic commentary.

Most tedious of all, though, are the samey sci-fi action-blockbuster shenanigans that howl for nearly two seemingly endless hours. Shadows steal bits of story, visuals, and sometimes even entire sequences from the likes of Ghostbusters and Independence Day, Avengers and The Dark Knight. But not in any amusing or knowing way. Not in any way that's the least bit surprising or unexpected. (Director Dave Green's only previous feature is 2014's tired E.T.-plus-Goonies mashup Earth to Echo. His second flick is just as exhausted.)

It's tough to even know whom this movie aimed at. It's too long and confusing for children, and it sexes up poor Megan Fox, as the turtles' human sidekick, in a way that is inappropriate for young eyes. Yet its plot — about an alien who wants to take over Earth for the usual reasons (i.e., no plausible ones) — plays like the script was written by an 8-year-old. Indeed, the creepy anthropomorphized titular turtles -- they've got the minds of doofy adolescents, the bodies of adult human bodybuilders (except for the green skin), and the faces of sluggish reptiles, all courtesy of CGI — come across as a child's idea of what being a grown-up must be like: all pizza parties and hanging out in your own cool hidden clubhouse. When you're not fighting aliens with your ninja powers, of course. Some junk just makes no sense, as in the opening scene, in which the turtles scale the Chrysler Building only so that they can then jump off of it (like, for fun?). Or the bit in which the movie derails itself, detouring into a tangent for a joke that isn't even funny during a sequence in which time is meant to be of the essence.

Then there's the bizarre soundtrack, on which classic-rock tunes pop up and fade in and out for no reason, with no connection to what's happening on the screen. (Was there a half-off sale in music licensing, perhaps? Did Green get a bargain on some tunes and simply didn't care if they actually worked in context? It's the only even halfway sensible explanation.)

And then there is — sob! — the bewildering presence of Laura Linney as a dour law-enforcement officer and stick-in-the-mud foil to the fun-loving turtles. The role is not only thankless but apparently completely unnecessary: the wretched spectacle of Linney's debasement aside, I cannot figure out what purpose her character serves. She literally did not have to be in this movie.

I will be lighting a candle for Linney, and praying that her paycheck was a very large one. ♦

Teenage Mutant Ninja Turtles: Out of the Shadows is not showing in any theaters in the area.