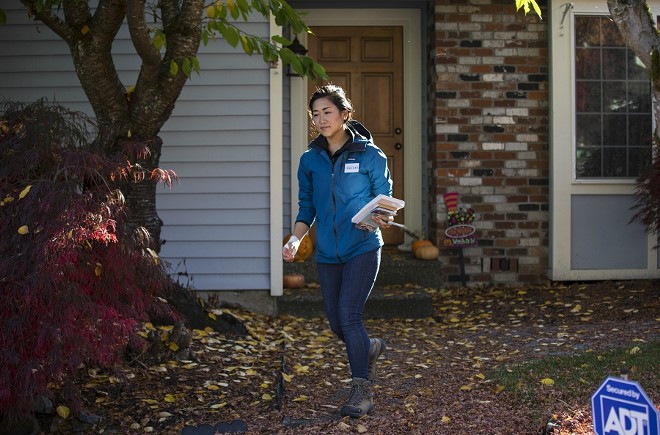 
SAMMAMISH, Wash. — It is the stuff of liberal fantasies: a vast, defiant territory, sweeping along the country’s Pacific coastline, governed by Democrats and resisting President Donald Trump at every turn.


A single election in a wealthy Seattle suburb on Tuesday could make that scenario a reality, handing the party full control of government in Washington state — and extinguishing Republicans’ last fragile claim on power on the West Coast. The region has been a rare Democratic stronghold on an electoral map now dominated by vast swaths of red, and Republicans’ only toehold on power there has been a one-seat majority in the Washington state Senate.

The prospect of such far-reaching autonomy for Democrats, who already hold the governors offices and both houses of the legislatures in Oregon and California, has infused extraordinary energy into what might have been a low-key special election. The race is on track to draw more than $9 million in campaign spending, a record-breaking sum for Washington state. National environmental and abortion rights groups have mobilized; business associations and oil companies have poured in money; and a former vice president, Joe Biden, has intervened on the Democratic side.

Leading in the polls and anticipating victory, Democrats have sketched an aggressive agenda on issues where strong consensus appears to exist in the party, including new laws on gun control, contraception and environmental regulation. The three states’ Democratic governors have spoken regularly about policy collaboration, and over the summer began coordinated talks on climate change with foreign heads of state.

Both parties see Democrats as favored to win the district, which voted heavily for Hillary Clinton in 2016. Republicans held the area’s state Senate seat largely because of the personal popularity of an incumbent lawmaker, Andy Hill, who died of lung cancer in fall 2016.

Despite their dominance at the federal level and in most state capitals, West Coast Republicans have been driven to the point of extinction as the party’s standing has plummeted in prosperous cities and suburbs, from San Diego to Seattle. Their candidate in the state Senate race, Jinyoung Lee Englund, a polished former political operative, has strained to set herself apart from the national party, declaring that she did not vote for Trump in 2016 and pleading with voters to embrace divided government in Olympia.

But the 45th District, a diverse suburban patchwork that stretches across the high-tech haven of Redmond and into more rural territory beyond — north and east of Bellevue — is emblematic of the territory that has lurched away from the Republican Party over the past year, recoiling from Trump’s brand of hard nationalism. Manka Dhingra, the Democratic candidate, has led in the polls by a comfortable but not overwhelming margin.