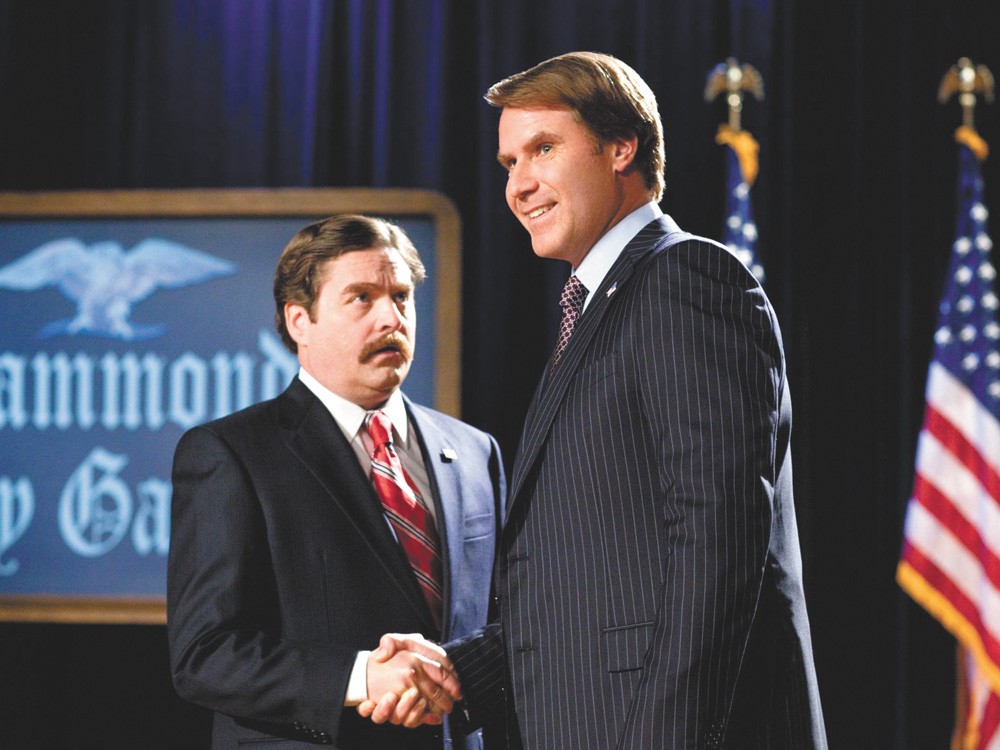 Ferrell and Galifianakis display a textbook passive-aggressive politcal handshake.
If, as the saying goes, timing really is everything, this film is gonna end up being the biggest comedy of the summer. It’s about politics — incredibly dirty politics, fueled by increasingly nasty TV ads that are funded by political action committees that are run by people who will do anything — ANYTHING — to win.

If that sounds familiar, it’s probably because your TV is on right now, and a presidential election ad is running. But this isn’t about Washington, D.C. This is about a congressional campaign in small-town North Carolina. The incumbent congressman, Cam Brady (Will Ferrell), is doing just fine. He’s a family man, he gives great stump speeches, he’s adored by his public and he has groupies that he doesn’t exactly ignore. And he has the shady powerbroker Motch brothers (John Lithgow, Dan Aykroyd) behind him, ready to make or break anyone of their choosing.

It’s time, they believe, to break Cam Brady. And they decide to do it with Marty Huggins (Zach Galifianakis), a gentle apolitical fellow who runs tours of his little town, and looks to be the kind of guy who will do what he’s told to do.

From there, it’s game on, with Ferrell and Galifianakis, both gifted comic actors who are adept at improvisation, yet can just as easily slow down to reveal a somewhat serious side, then demonstrate how to pull off a believable 180-degree character arc.

Cam is a self-centered jerk, imbued with the belief that everything he does is the right thing. Marty also believes in himself, but no one else does, especially his wealthy daddy (Brian Cox), who thinks his son is a fool. Cam goes home each night to an awful family (the members of which have their own agendas). Marty returns each night to a lovely family (well, let’s just say they’re lovely on the surface).

Though the story takes off like a rocket as far as pitting Cam and Marty against each other (they start out with mutual hatred, and escalate from there), first-time feature writers Chris Henchy and Shawn Harwell, along with veteran comedy director Jay Roach, joyously litter the film with all kinds of winning distractions, somehow making it bitingly satiric, extremely smart, and just plain silly all at once.

We’re treated to plenty of casual cursing, questions about what kids are really listening to on their iPods, a brilliant if subtle Temptations sight gag, a stab at racism in a performance by Karen Maruyama as Mrs. Yao, and something that can only be described as “the nipple scene.”

Yes, the film delves into raunchiness, but never crosses the line into being disgusting or too juvenile. A nice touch is the addition of some “realism” via cameos by, among other newsfolk and commentators, Chris Matthews, Wolf Blitzer, Bill Maher, Dennis Miller, Lawrence O’Donnell, most of the cast of Morning Joe and, for no understandable reason, Uggie (the dog that stole so many scenes in The Artist).

As the debates between the two guys get looser and nastier, and the TV ads go way past the point of absurdity, the film remains consistently hilarious, albeit going a little overboard and letting a couple of scenes run on too long.

The most credit for making it all mesh goes to Jay Roach, who’s worked both sides of the movie aisle. He directed all three Austin Powers films, and produced Borat. He also directed and produced the dramatic TV movies Recount, about the Republicans stealing the 2000 presidential election, and Game Change, about John McCain’s choice of a running mate.

Still, whatever Roach has learned before that makes this one so good, it’s only going to be helped by the timing of its release, right in the middle of a particularly vicious election season.