Hangman Creek gets an 'F' from Spokane Riverkeeper; plus, Spokane, Fairways Golf Course battle over water 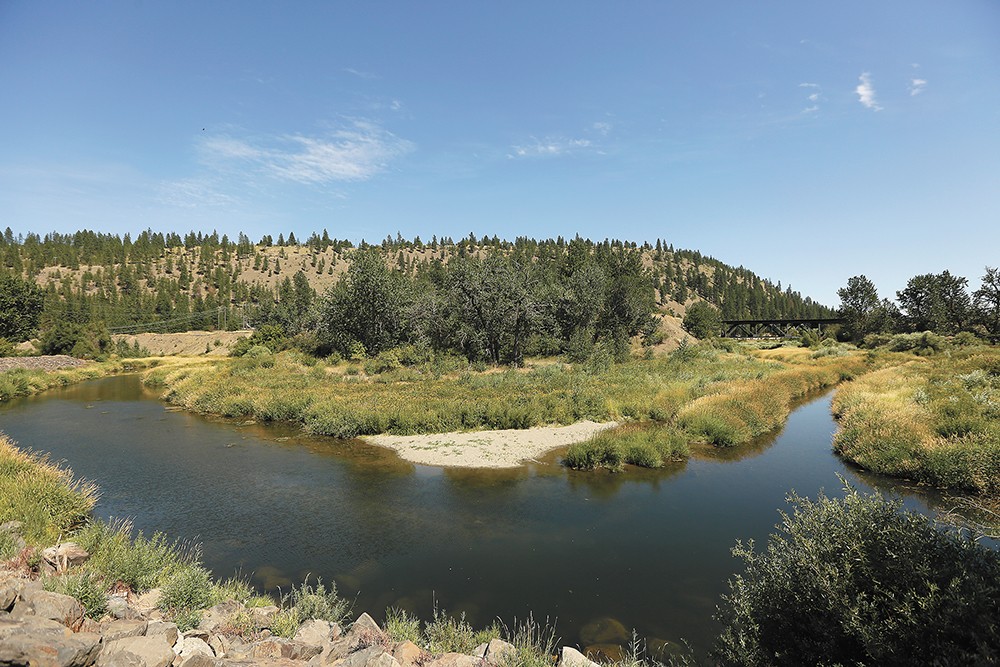 The report card is in, and HANGMAN CREEK has some serious work to do if it wants to have a good summer: Spokane Riverkeeper gives it an F.

That's based on Washington state water quality standards, which take into account factors like the amount of dissolved oxygen, the temperature, and the turbidity — how clear (or in this case not clear) the water is. Hangman does poorly on all accounts.

The creek's headwaters start in the forested foothills of the Rockies in Idaho, then head northwest, crossing through Whitman County, then Spokane. The creek eventually flows into the Spokane River.

"The creek itself is contributing to major pollution problems in the Spokane River," says Spokane Riverkeeper Jerry White.

White gathered with others concerned about water quality near the Centennial Trail on Tuesday morning, overlooking the point where the creek meets the Spokane River.

He asked the public to call on the state Department of Ecology to enforce the water standards that exist, and bring "bad actors" who pollute or contribute to erosion along the shoreline into compliance.

Trout which used to thrive in the creek now can't, in part because of the high temperatures. Last summer, the creek got as high as 70 and 80 degrees in places, enough to be toxic for the fish, explains Jule Schultz, Spokane Riverkeeper science lead. It shouldn't be warmer than about 64 degrees, by water quality standards.

Nitrates and phosphorus, usually a result of runoff from human uses along the creek, are also too high.

Planting riparian shade along the shorelines of the creek, and maintaining a buffer, could prevent erosion and runoff, and provide enough shade to keep the water temperature cooler.

The Riverkeeper said that people who want to help can volunteer with restoration efforts, and sign a petition to state Department of Ecology director Maia Bellon, demanding strong action against those who contribute to the creek's degradation. (SAMANTHA WOHLFEIL)

OUR WAY OR THE FAIRWAY

An ongoing dispute between the city of Spokane and THE FAIRWAYS GOLF COURSE in Cheney over a hefty unpaid water bill resulted in the water for the golf course being shut off, and then — after a lawsuit was filed against the city — turned on again Tuesday.

"The water wasn't turned on. They owed us money," says city spokeswoman Marlene Feist. "At this point, we've been sued. So it's really inappropriate for me to talk about any more."

In a Spokesman-Review article, the city said that Fairways owes more than $40,000 for two months of water from last year, capping off years of payment disputes. But attorney Bob Dunn, who frequently sues the city of Spokane, says the city has been unfair to county water users.

"Fairways has had a complaint, for about 10 years now, about the arbitrary and capricious water use rates the city has been charging county users," Dunn tells the Inlander. He says that county golf courses are charged significantly more for water use than those in the city limits, and that Fairways couldn't afford to pay for the recent hikes.

"The city negotiation position is basically to say 'F--- you! Pay the money and we'll keep the water on," Dunn says. "The city turned the water off a week ago."

That, Dunn says, threatened to destroy the golf course as temperatures spiked. So Fairways sued, and Dunn successfully managed to convince a judge on Tuesday to force the city to turn the water back on.

"As part of his ruling, the judge also required Fairways to put $40,740 — the amount the golf course allegedly owes — into escrow until the case concludes."

"This rate dispute, which is just about money, now can be argued in the court," Dunn says. But he also says to expect another lawsuit to be filed against the city of Spokane soon.

"We got 6,000 county users who are using city water services," Dunn says. "The rates they're charged have to be justifiable and reasonable."

Dunn says he plans to file a class-action lawsuit, demanding that those county water users be refunded for being overcharged by the city. (DANIEL WALTERS)