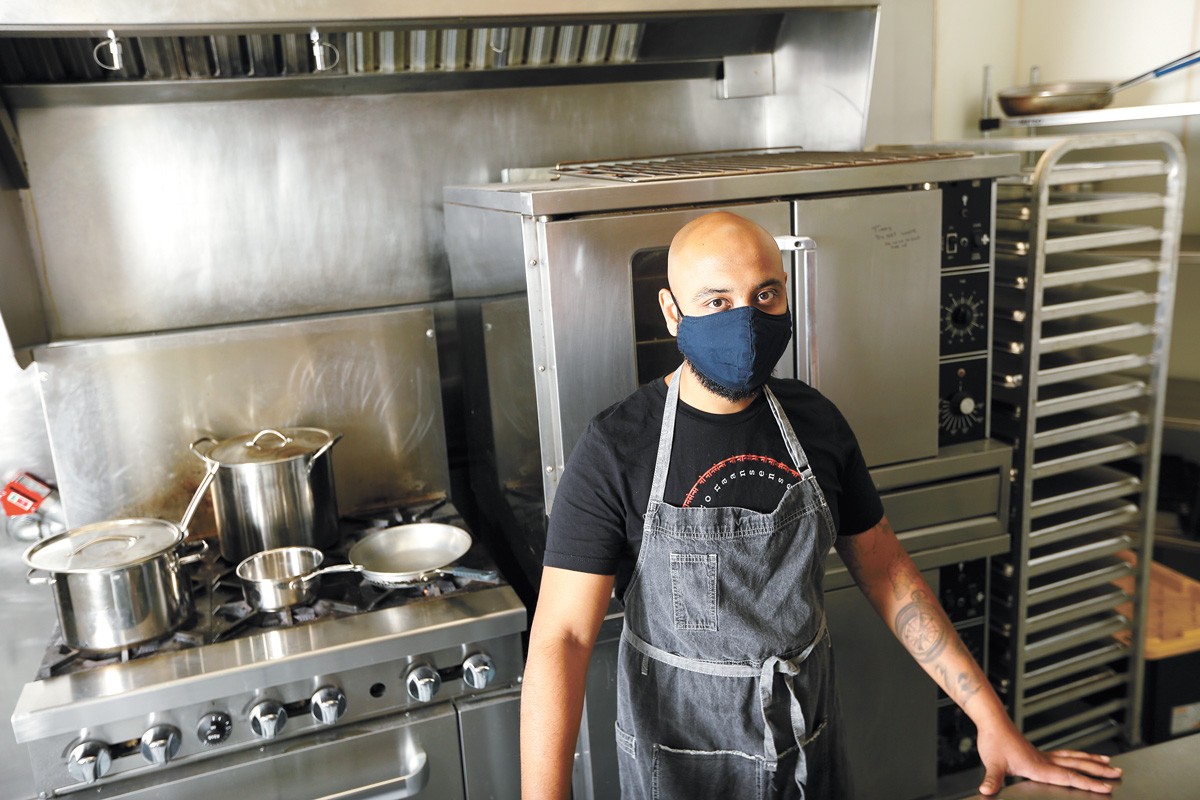 Young Kwak photo
Shaarique Qureshi has expanded his No NAANsense Indian food business through delivery during the pandemic.

Even before COVID-19 changed life as we know it, the dining industry was already in the midst of a major, ongoing shift.

Pop-up kitchens across the U.S., and here in the Inland Northwest, are rapidly becoming the home base for many food purveyors looking to get started in an industry known for its prohibitively high startup and overhead costs, from rent to labor to food.

Often referred to as "ghost" kitchens or digital kitchens for their lack of a visible storefront, counter or dining room, these operations typically offer shared commercial kitchens or catering spaces where users rent by the hour or on a contract basis. In some major U.S. cities, rentable shipping container-sized pods and mobile units are also part of the ghost kitchen industry.

Though its beginnings predate the pandemic, the evolution also happens to harmoniously mesh with how restaurants are now reaching customers via delivery and carryout.

For Shaarique Qureshi of Spokane-based No NAANsense, the transition from where he'd typically sell his scratch-made Indian food — at farmers markets and pop-ups at local breweries — to delivery from a commercial kitchen both saved and boosted his business after restrictions on public gatherings began.

"When the pandemic hit, delivery picked up quite a bit and we started doing a lot better with deliveries," Qureshi says. "But we also used to do a lot of one-day events and all those major events were canceled, so that took a hit."

Instead of focusing on the in-person sales that gave No NAANsense its start in 2019, initially offering Indian-inspired naan pizzas, Qureshi now offers his weekly menu solely for contactless delivery, Monday through Friday. Customers can order online at nonaansensespokane.com or through the business's social media pages, with delivery available at no cost to locations within five miles of downtown Spokane, and for 50 cents per mile beyond that.

"It's a full meal, and unique every time," says Qureshi, who learned to cook at his family's restaurants in Mumbai before moving to Spokane in 2015.

"Our most popular boxes are curry boxes like butter chicken. We are also playing with fusions, so last week was a quesadilla with keema masala ground beef."

No NAANsense, along with many other fledgling food makers, operates out of Kitchen Spokane's commercial space inside the NorthTown Mall.

Kitchen Spokane is a locally owned nonprofit venture with six commercial kitchens for rent across the Inland Northwest. Two new locations are currently under construction, one inside Coeur d'Alene's Silver Lake Mall, and another that will soon be Kitchen Spokane's second location in the Spokane Valley Mall, says Executive Director Jayme Cozzetto.

Although Cozzetto says Kitchen Spokane's typical summer usage is down this year compared to last — a result of so many event-based food vendors having their summer schedules canceled — he expects demand for communal cooking spaces to pick up again and see consistent, long-term growth even after the pandemic subsides.

"We're probably growing 18 percent a year," he notes. "Something I didn't expect is that two, maybe three, months into COVID we saw some people thriving and growing, and it was people doing home meal prep, things that were catered to the home audience and not the retail audience."

Currently, Cozzetto says the business has 95 active clients across its six locations, ranging from local food trucks that use its spaces for ingredient prep and food storage to small-batch producers making items for retail sale, as well as hot food vendors like No NAANsense and its counterparts, including Lumpia Loca, operating from Kitchen Spokane's Spokane Valley Mall spot.

Rene Moya launched the Filipino-focused venture in mid-May, transitioning from a career in construction to make food from his wife Mayumi's home country and that he learned to cook from his mother-in-law.

"I put my twist on it as far as what I know personally, but I still keep it authentic," Moya says. "At first, as a joke, we thought 'Let's make some extra money and put our food on Facebook and see if anyone would like any.' It really happened so fast; I stopped construction and started making food. Our goal in general is to own our own spot one day."

By far, the two main drivers of growth for Dani Lundquist's vegan salad delivery business LucidRoots are Facebook and Instagram, and it's been that way since she started selling food to the public back in 2015.

Lundquist is getting ready to launch a website for customers in North Idaho to order LucidRoots' flavor-rich and nutrient-packed salads for delivery right to their doorstep. Home dropoffs make up about 75 percent of the company's typical average of 100 orders per week.

"My business has always been on Facebook and Instagram. Without those, I don't think I ever would have grown the way I have," Lundquist says. "I really say that a lot of the reason I have such loyal customers is that I have spoken directly to them the entire time. Every time they order, I talk to them."

LucidRoots, which operates from a commercial kitchen in Post Falls, has seen about 30 percent sales growth each year since launching. Lundquist estimates she's already surpassed that rate this year due to COVID and the subsequent increased demand for ready-to-eat delivery meals.

"As a young entrepreneur, I really think that doing these online orders and delivery allows us to have a place where we can put our products out to the world," she says. "Not everyone gets a million-dollar restaurant and investors backing us. Instead of jumping into a food truck right away that costs $30,000 or more, we can prove concepts with farmers markets and delivery with just $1,000."

Launched by owner Gage Lang in late May, Breauxdoo Bakery has already seen demand for its late-night menu of fresh-baked cookies and cakes skyrocket, enough so to expand operation from three to six days a week. As of this month, the bakery is now open Tuesday through Thursday from 7 pm to midnight, and until 1 am on Friday and Saturday nights, Lang says.

"We've been super slammed and busy. It's been pretty consistent daily of 75 to 100 orders," he says. "I think the whole reason for that is social media, and it's so easy to order and have it right to your door. You don't even have to say hi to us. And we're the first dessert delivery to hit Spokane that you can order late night."

Breauxdoo Bakery is based out of River City Kitchen in downtown Spokane's Intermodal Center. Customers can order at breauxdoobakery.com for delivery or pickup.

Lang says he spent two years perfecting his cookie recipes for specialty flavors like red velvet, cherry chip and funfetti before launching Breauxdoo, which he has plans to transition into a permanent storefront as soon as next year, eventually expanding with franchise locations. Over time the bakery's menu will grow, too, with the goal of creating "a funky American bakery" where customers can even get treats like warm apple pie and ice cream delivered to their door.

"I think in the beginning, I felt like I must be crazy for starting this and I felt like I was the only one doing it," Lang says. "Then a couple weeks in, I realized that everyone was starting these style businesses and working from commissary-style kitchens. It's rewriting the way we look at food and order food." ♦

FROM THEIR KITCHEN TO YOURS

So, 504
Cajun and New Orleans-style food from owner Jae Marie Bantz-Mullen. Order at ohso504nola.square.site for delivery or pickup, Fri-Sun.

Botanical Bites
Vegan food and desserts from owner Samantha Falcone. Order at botanicalbites.co for delivery or pickup at NorthTown Mall, Fri-Sun from 3-7 pm.