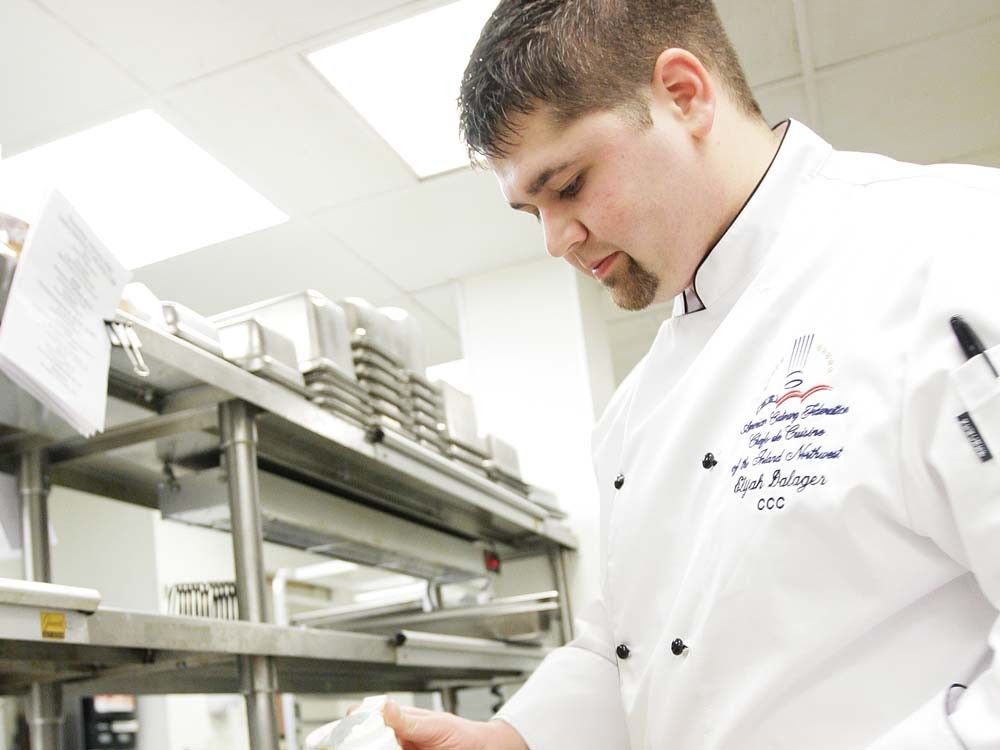 Young Kwak
Chef Elijah Dalager takes care of many of the little things, like syrup on pancakes.

Elijah Dalager rocks from heel-to-toe in front of a gas burner, whisking. In a large mixing bowl are egg yolks and water and butter that will only play nice if mixed at a brisk pace at the right temperature. He moves the bowl on and off a pot of boiling water.

The kitchen in which he stands is large and white and empty. His hands work quickly, but he isn’t rushed.

It’s just after 6 am. It’s the food that keeps him moving, not the pace of the orders coming in.

Soon enough, though, that will change. Dalager, who was named the 2011 Washington State Chef of the Year by the American Culinary Federation, takes these quiet moments to organize the kitchen, to gather himself for the day and, when he’s preparing something like hollandaise sauce, as he is this morning, to take the time to get it exactly right.

Slowly, staff trickle in — a couple young servers. Dalager begins to set things out, like dry ingredients for two different types of pancake. The dishwasher arrives. Dalager pulls three broad trays of bacon out of a large commercial oven before bottling the finished hollandaise.

Only 27, Dalager (pronounced “dah-LAHG-er”) has already worked his way up from dishwasher to lead cook at the Spokane Club and landed a gig as chef de garde manger at Restaurant Charlie, a Michelinrated spot in Las Vegas that is run by celebrity chef Charlie Trotter.

Dalager describes both those experiences as formative. The work he did at “the Club” was intense and arduous. Restaurant Charlie was almost debilitating. “I did 14- to 15-hour days, six days a week,” he says, “catering to extremely wealthy individuals who had needs that, sometimes, couldn’t be met.”

Now, he finds himself back in Spokane, making food for people who he says are every bit as particular as those Vegas VIPs.

The first ticket slides across a steel shelf into his prep space at about 8:10, and Elijah Dalager starts to move.

It’s time for breakfast at the Harbor Crest retirement community.

Dalager is sous chef at Harbor Crest, second in command to Executive Chef Raymond Delfino. The pair have a history. Delfino first hired Dalager at the Spokane Club in the early 2000s as a dish washer.

Dalager wasn’t always this driven. “We had to put a fire under him once in a while,” Delfino says. He worked his way up, though, and found that drive. By 2008, he was looking to take his show on the road.

In the year he spent cooking for Trotter, Dalager had learned a lot, but the 80-hour weeks began to build on themselves. Dalager says he didn’t burn out, but “I needed to recharge.”

At the Spokane Club and in Vegas, Dalager was schooled in exacting standards. It’s been important for his work at Harbor Crest. “It gets ugly,” Dalager says, “half the people saying the beans were too cooked. Half not cooked enough.”

“If you don’t have it dialed in and then nail it,” he continues, “you hear it. It’s brutal.”

It’s not just the entrées. Sometimes, it’s not even things prepared in the kitchen. “Soup and ice cream are the big things.”

Delfino points out one of the benefits of Dalager’s experience in Vegas. “He learned gastronomic things he hadn’t had experience with before,” Delfino says, “and just more of the finesse of technique than he had in the past. He’s learned to braise a really nice pork belly.”

The pair incorporates this experience into their meals. Last week, Dalager and Delfino used the pork belly in an Asian theme night that also included a “really light, clean” udon soup and a hand-tempura-ed Asian catfish called Swai.

Just as often, though, the residents dictate the terms. At Harbor Crest, Dalager says he’s forced to confront and prepare foods he’d previously avoided. “I don’t like Lima beans,” he says, “but we have 30 people who love them, so we’re going to do Lima beans.” He pauses a moment. “Brussels sprouts. That’s another one.”

Delfino puts the experience at Harbor Crest succinctly: “Elijah and I both just traded one [private] club for another.”

Though the demands are as exacting, the slower pace at Harbor Crest has allowed Dalager to focus on competitions like the one that led him to being named Chef of the Year. It has also helped him reconnect with early feelings shared with his father, of food preparation as an act of service.

“He always had health issues,” Dalager says, “He was kind of like a stay at home dad.”

His father taught Elijah the trick to good spaghetti (“leave it alone”) at an early age. Around the same time, he showed him how to butcher a chicken. “I was like, ‘Whoa, Dad, I’m seven,’” Dalager remembers, laughing.

One morning, when Dalager was 12, he made his father breakfast. Dalager’s chest swells reliving it. “He said he’d never had a better omelet.”

Dalager’s mind is dotted with impressions like this. “All my good memories of my dad are around food,” He says, “That’s kinda how I keep him alive.”

Ray Dalager died when Elijah was 18. “I lost the ability to feel for a while,” Dalager says. He also lost his mooring. He didn’t find it again until he focused on cooking.

Since then, he says he’s built his web of support with the people he found in the kitchens he worked in. (And recently Dalager has found someone, his fiancée Tiffany Everett, who “just gets it,” he says.) At Harbor Crest, that web of support has come to encompass the hundred-plus people he cooks for every day. “These people are like family,” he says.

Dalager’s Washington State Chef of the Year honors have earned him a berth to the regional competition in Scottsdale, Ariz., beginning April 29. If he does well there, he’ll compete in the national competition.

Dalager says a huge part of traveling to compete is knowing what to pack. “It’s so expensive,” he says. Like so much else in his life, “you have to get it perfect.”

His thoughts will be occupied by the skills he’s learned in the kitchen from his adoptive families: the ability to cook to exacting standards, under high stress, with rigorous demands on time.

In there too, of course, will be what memories remain of his father, and the meals they made together.

A week after our initial meeting, Dalager is happy to report that he received zero complaints about his hollandaise or the eggs Benedict was drizzled over. He takes me to his desk and pulls out a recent pile of comment cards.

The ones that are negative he doesn’t keep. He and Delfino have made a point of addressing problems immediately, whether it involves a member of the staff or their own preparation.

The chef says getting the details right is essential to him on a level deeper than excellent service. “These are our elders,” he says, “For some of them, this is all they have left. They deserve everything we can give them.”

Dalager hangs onto the positive comment cards until the drawer gets cluttered. “They’re as close as you get to love notes,” he says.

That day, Dalager was in the dining room to take photos for The Inlander.

Alice Crippen, 87, motioned to him. “Sir?” she said, “Do you have a moment?” “Sure,” Dalager replied, kneeling down to meet her at eye level.

Crippen pointed to her plate, which contained nothing but a half of a grapefruit. She explained how a member of the staff had cut the fruit away from the rind and pith around the edges but left it connected at the bottom. It was difficult for her to spoon up, she said, and doing so tended to destroy the fruit. “I don’t know why anyone would do that,” she said.

Dalager apologized, and explained that it wasn’t personal.

He said people sometimes behave carelessly, or are tired, or just aren’t thinking about who they’re preparing food for.

“It seems like a simple thing to me,” Crippen replied.

Local women on sexism, success and overcoming gender barriers in the culinary profession