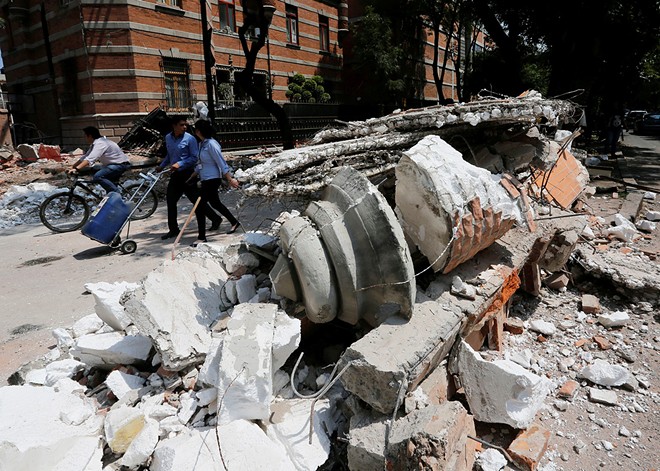 People walk next to debris after an earthquake in Mexico City on Tuesday.
By KIRK SEMPLE, ELISABETH MALKIN and PAULINA VILLEGAS
© 2017 New York Times News Service


MEXICO CITY — A powerful earthquake struck Mexico on Tuesday afternoon, toppling buildings with people still inside, rattling the capital and sending people flooding into the streets for the second time in just two weeks.


Dozens have been reported killed across the country, including 42 in the state of Morelos, close to the epicenter of the quake. But the figure is expected to climb much higher, especially because rescuers were still frantically digging out people trapped beneath mounds of rubble.

The earthquake occurred shortly after 1 p.m. local time about 100 miles from Mexico City. It registered a preliminary magnitude of 7.1, causing heavy and prolonged shaking in the capital.

During the quake, some facades and at least 20 buildings in Mexico City fell, crushing cars and trapping some people inside, officials said. Emergency workers and ordinary citizens raced to the site of downed structures, lifting rubble with their hands in an attempt to free anyone stuck underneath.

Tuesday’s earthquake struck on the 32nd anniversary of another major disaster: the 1985 quake that killed as many as 10,000 people in Mexico.

It also came less than two weeks after the most powerful earthquake in Mexico in a century, an 8.1 magnitude quake that killed at least 90 people, destroyed thousands of homes and was felt by tens of millions of people in Mexico and in Guatemala.

Residents in Mexico City, having just experienced shaking from that quake, said the tremors on Tuesday were far worse.

In parts of the city, the wreckage was evident immediately, including damage to the main airport. Residents remained outside even after the shaking faded, fearful of returning to their buildings.

In the neighborhood of Roma Norte, an entire office building collapsed. Several people suffered injuries and were whisked away in ambulances. An unknown number remained trapped or crushed inside.

Talia Hernández, 28, was on the second floor of the building, taking a tattoo class. When the earthquake hit, she said, she rolled down the stairs as they were collapsing. She managed to escape but broke her foot in the process.

President Enrique Peña Nieto said on Twitter that he had been flying to Oaxaca at the time of the earthquake and had immediately returned to Mexico City. He said the National Emergency Committee would meet when he arrived to assess the situation and coordinate relief efforts.