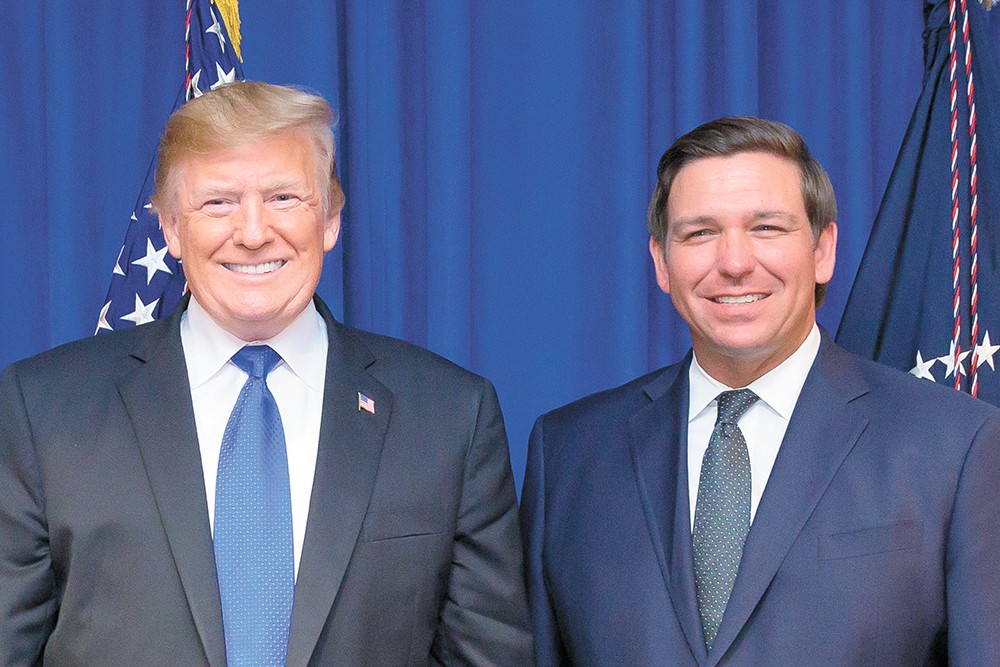 As the potential impact and exponential spread of COVID-19 was just beginning to be understood, some leaders acted swiftly. They canceled large public gatherings, urged social distancing and rushed to secure medical supplies.

Even as Florida Gov. Ron DeSantis called for a ban on travelers from New York, he did little to limit social contact and, consequently, the spread of the pandemic within his state.

We're likely about to see the catastrophic impact of these delays. But perhaps it's worth noting one place where Florida leaders were quick to act.

Shortly after the canceling of 2020's NCAA basketball tournament, the Florida State Senate sprung to action. A resolution was introduced and sped through the body to be unanimously passed by the senators.

This was weeks before the U.S. Senate and House similarly unanimously passed their own legislation to address COVID-19. And while that federal legislation's ultimate effectiveness will undoubtedly be assessed and reassessed for decades to come, the Florida State Senate's response is deserving of some examination and consideration as we consider our next steps to defeat this pandemic.

So what did that rushed Florida Senate resolution do? It declared victory.

The summary: "A resolution declaring the Florida State University Seminoles basketball team, by virtue of tremendous skill on the court and the heart and spirit shown by the players and coaches this basketball season, the 2020 National College Athletic Association basketball champions by default upon cancellation of the NCAA tournament due to concerns raised by the spread of the novel coronavirus COVID-19."

Instead of reducing social contact, securing medical supplies, or even making plans for safe elections this November, the Florida Senate prioritized stating that its basketball team was the champion by default.

The resolution makes a concise but unconvincing four-point case for the declaration, including pointing out that the Seminoles were ranked No. 4 in the national college basketball standings and had a good shot at challenging the top seeds. Meanwhile, as of April 6, the Florida governor continued to fail to issue a comprehensive "stay home" order, specifically suggesting large gatherings for religious services could continue.

This response to our national crisis is admittedly as darkly comic as it is devastating for what it fails to do. But this unsupported hubris, obsession with meaningless optics and rush to declare victory have some unsettling parallels to the response from the White House.

Our president repeatedly suggests victory is at hand before being pulled back time and time again by public health experts from the brink of irresponsible and irreversible mistakes. And his early reluctance to face the potential tragedy ahead of us has magnified its eventual total scale.

Don't get me wrong. It's important in these times that we remain optimistic, confident that we can and will eventually prevail. Because we will — and also because despair has its own ways of magnifying the impacts of what we face.

The reality is what's ahead of us in the coming weeks is tragic, and most of us will come out of it on the other side certainly scarred from the damage to ourselves, families, friends and communities, but nevertheless with potential to move forward.

We're already seeing signs of success here in Washington state, particularly where I live now in Seattle — the initial epicenter of the outbreak in our nation. The "curve"  here is flattening as COVID-19's spread slows from a combination of swift government action and individual responsibility. We've even been able to return some respirators to the national stockpile.

But attempting to move forward prematurely — to focus on the optics of victory, like who won a basketball tournament that never happened — rather than on continuing to do the communal work required to stamp this pandemic out could prove disastrous.

Once we pass the peak and the number of total cases in our region begins to fall, there is a different potential deception of perception that could occur: the belief that we can swiftly return to business as usual.

As I noted, there is increasing evidence that Washington state might be particularly effective at flattening the curve and consequently will decrease the impact of this pandemic on our communities. However, if we don't keep in place social distancing well beyond the decline — and even the peak — a reemergence is likely.

Ultimately, the greatest threat we face is a premature declaration of victory: a return to normalcy that lasts only briefly as COVID-19 comes roaring back.

Obviously, we still have at least several weeks to go before we reach that point, but steeling ourselves now to be in this together for the long haul is essential. Even as we eventually restore regular travel and reopen businesses, we will need to continue to wear masks, wash our hands, and work together to eliminate this virus.

There will be no true champion of the NCAA basketball tournament this year. This is disappointing for the players, coaches and fans. It is a genuine sacrifice — just as many others are delaying weddings, missing graduations, losing desperately needed income and painfully unable to attend funerals. These are not all equivalent losses, but all are difficult.

Let's not let these sacrifices go to waste, but instead honor them — including the Florida State University Seminoles — by doing what it takes over the long-term to truly achieve a permanent victory. ♦