Preparing for the Worst

Coeur d’Alene wants to spend $1.4 million on security improvements — but can they actually stop school shootings? 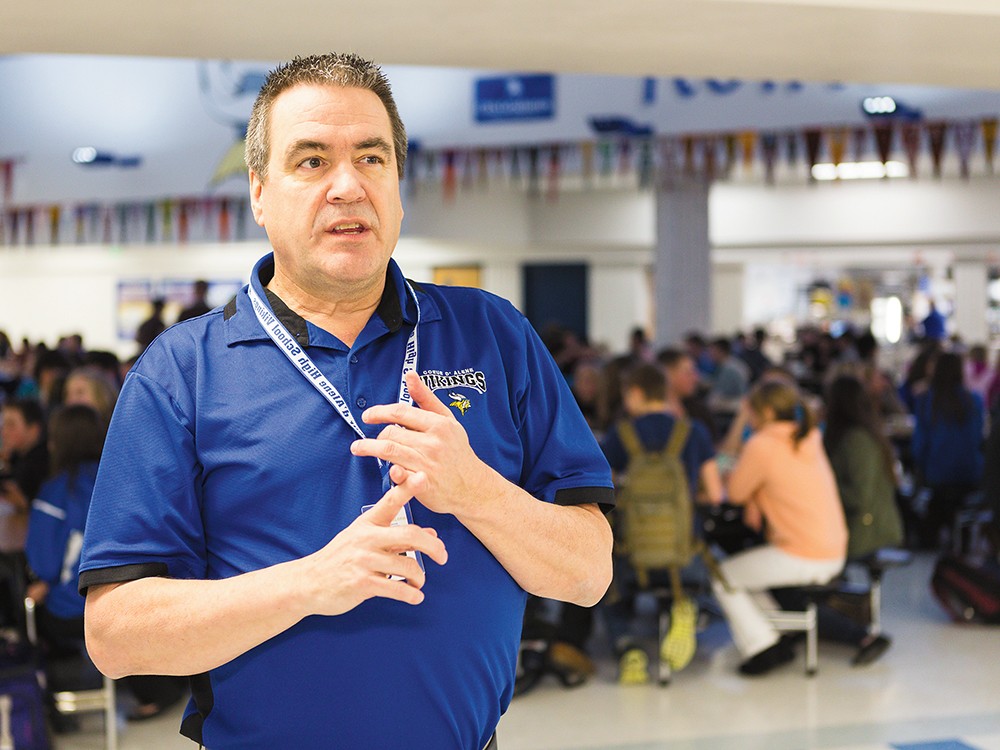 Coeur d’Alene School District Superintendent Hazel Bauman is still haunted by the memory. Five years ago, a woman called the Sheriff’s Office to report that her suicidal son was missing, may have stolen several guns and was at risk of “doing a Columbine.”

Watching over the Lake City High School surveillance system with the building on lockdown, a school resource officer spotted the teen pulling into the parking lot. Police quickly arrested the student and later found a loaded shotgun and three stolen high-powered rifles in his vehicle.

The thought of what might have been still frightens Bauman.

The Sandy Hook Elementary massacre in December has sparked debate over gun control and mental health policy. But for school districts like Coeur d’Alene — where grade schools have less security than Sandy Hook did — it has also prompted serious questions about school buildings themselves. Are there too many entrances? Can the doors lock quick enough? Can police respond fast enough?

In a conference room at Coeur d’Alene High, potential solutions are scrawled on a white board: “Perimeter sec.,” “video surv.,” “panic button,” “doors that lock inside,” and “mental health issues.”

After the Sandy Hook shooting, the district brought in a private security firm from Spokane. Bauman called the chief of police and the county sheriff to tour through the schools over winter break. “We said, ‘So where are our vulnerabilities?’” Bauman says.

The day school started after winter break, the district put a resource officer back in Canfield Middle School after the position had been cut. Two additional officers will also be assigned to elementary schools in the next two years.

Then the Coeur d’Alene Board of Trustees decided to stick an additional one-time $1.4 million in security funding — the equivalent of a year’s pay for 45 beginning teachers — to their proposed replacement levy.

The March 12 levy vote comes as a full package: Voters approving extra security funding will also be voting for more than $25 million in traditional levy funds used to pay for things like classroom support, buses and athletics.

Some specifics haven’t been decided and others remain secret — the district doesn’t want to give too much away to a potential shooter. But the overhaul will mean new fences and new doors that could lock from the inside, Bauman says. Teachers won’t have to take risk stepping outside to lock everything down.

Exterior locks would work on a hotel-style card system, so keys of former, potentially disgruntled employees would automatically be deactivated. Surveillance cameras would be added and upgraded.

Metal detectors were considered, but quickly rejected. The prospect of herding over a thousand students through them would have been a logistical nightmare.

Last Friday, the doors at Coeur d’Alene High School are unlocked and open directly on the cafeteria where hundreds of students eat. Principal Warren Olson explains how, two weeks ago, students for the first time practiced splitting up into three groups in the event of a lunchtime lockdown.

School shootings are still rare but have been increasing. Between 1969 and 1978 there were only 16 school shootings, according to sociology professor Jessie Klein, but between 1999 and 2008 there were 63. Just last week, less than a two-hour drive away from Coeur d’Alene, two fifth graders brought a knife and a loaded gun to Fort Colville Elementary School, allegedly planning to hurt as many as seven students.

Olson walks down the hallway, a bell rings and a mass of students flood into a lengthy hall. “Look at the length of that hallway. Look how far you’d have line and sight and vision if you were a shooter,” he says. “I read the book Columbine. I shouldn’t have done it.”

Long halls were one reason school resource officers have wanted access to rifles locked away in gun safes. After the Sandy Hook shooting, safes were installed at Coeur d’Alene’s high schools.

There are too many ways to get into the school, Olson worries. “I’m trying to get the building down to two access points,” he says. He points to newly installed scissor gates, metal webs that can slide shut to block off parts of the school. He wants to enclose the school, fencing in the portable buildings in order to protect students from anyone outside. The windows are breakable, but he says the district is considering strategically placed panes of gridded or even bulletproof-glass.

A potential remodel may move the office to the main entrance, using a police-station or hospital-style videophone to grant people entry after school starts. “I’d like a system where they buzz them in and out,” Olson says.

Yet, many of these same security improvements had been installed at Sandy Hook Elementary, before the massacre. It had a new camera system. The doors were supposed to be locked at 9:30 am. Visitors had to ring a buzzer to be let in. But the doors were made of glass, and the shooter was able to shoot through them and climb through.

It’s a reminder that, no matter how much Coeur d’Alene spends, they remain vulnerable.

“We will never be able to provide a 100 percent guarantee that your children are safe in our school, short of making it a fortress,” Bauman says. “Short of razor-wire and 12-foot-high [walls], and magnetometers at every door.”

But she believes that even imperfect improvements will make a school a less attractive target.

“I think that what it says to the bad guys is that we’re not as vulnerable as we used to be. We’re not just a sitting duck,” she says. “If I’m going to create mayhem, maybe the school isn’t the first place that comes to mind as the most vulnerable. … I’d think I might have to frankly do my damage somewhere else.”

In Washington state, funding to make schools safer appears to be on the way, not from bonds or levies, but from the state Legislature. A bill earmarking $10 million in school safety funding passed unanimously through the state Senate on Feb. 11.

By Dec. 1, 2014, Washington state schools would be required to install a “panic alarm system,” to improve the speed and effectiveness of cops responding to emergencies. It also encourages schools to increase perimeter security, add security cameras and decrease the number of entrances. Half the $10 million would go the panic buttons, the other half would be doled out on a case-by-case basis.

“We want to make sure kids are safe when they go to school,” says state Sen. Andy Billig, D-Spokane, a co-sponsor. “This is not the complete solution, but it’s a step in the right direction.”