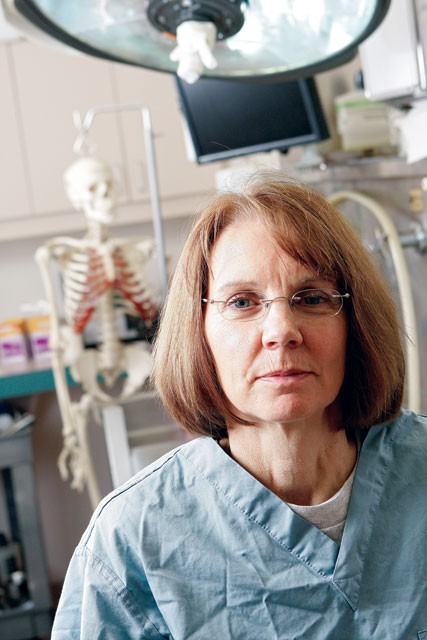 Lacey Jones was sliding. A sophomore at Whitworth, Jones had transferred from Washington State to play softball, the sport she loved. She was practicing sliding one day in February 2002, gliding over the grass again and again, until her metal cleats dug into the turf and her ankle popped. The doctor told her it was broken, cast it and prescribed Vicodin, a commonly prescribed narcotic.

That’s when Jones began navigating the fine line between appropriately medicating her pain and abusing a drug.

“It helped my pain, [but] I didn’t even really like the feeling that [the pills] gave me,” Jones says. “After awhile, I started to like that feeling. So I just kept taking them. My body got used to taking them, my brain got used to that feeling. It got to a point where I needed them just to feel normal.”

Two years later, Jones found herself on another field of grass, in Coeur d’Alene Park near downtown Spokane, with her dogs, Teeny and Tiny. An older homeless man named Fuzzy approached.

“You know anybody that wants to buy some methadone?” he asked her.

“I was severely addicted at that point, and so I said, ‘Oh, sure!’ He became my best bud. It wasn’t safe, I’m sure,” Jones says. “Who knows who that guy was? I was spending all my money on pills. I would break into people’s houses when they weren’t home because I knew they had pills. Every waking moment was in search of more pills. It was an exhausting lifestyle.”

Jones is lucky. She survived. Not everyone’s so fortunate.

It’s an all-too-common remedy in our society: magic pills for every imaginable ailment. Increasingly, however, the pills often do more harm than good.

Prescribed by a doctor, made in a sterile lab and approved by the federal government, pain medication has become something once reserved for the street corner: a highly addictive drug that users will do anything to obtain. Crime is up, solutions are elusive and, most importantly, more and more people are dying.

In 1999, five people in Spokane County died from accidental prescription drug overdoses. In 2008, that number jumped twenty-fold, to 100.

“It’s a huge problem. The whole drug overdose death issue has changed so dramatically in the last 10 years.” says Dr. Sally Aiken, a medical examiner for the county. “When I came [to Spokane] 10 years ago, the deaths — there weren’t as many of them — but they were almost all heroin, and maybe some cocaine, and maybe some heroin plus cocaine. Now, I don’t see very many deaths like that. Mostly, it’s all prescription medications.”

In just eight years, between 1997 and 2005, the amount of five major painkillers sold at U.S. retail pharmacies rose 90 percent, according to Drug Enforcement Administration figures.

“Prescriptions are increasing,” says Aiken. “Between 1998 and 2006, prescriptions increased eight times for methadone. There’s a five-time increase in methadone deaths in the same time period. It’s much more available…. It feels safe — people think because it’s a prescription it can’t hurt them. They don’t know that there’s not much difference between what can make you high and what can kill you.”

“People don’t appreciate how powerful they are. Consider the fact that OxyContin [the brand name of oxycodone] is generally 30 to 40 times more powerful than morphine, unit per unit,” says Rob McKenna, Washington state’s attorney general. “People who are abusing them are taking them in a way that makes them more dangerous. They’re grinding them up and swallowing them, or snorting them or injecting them. When you do that, you bypass the time-release mechanism — the safeties.”

In 2006, about 39,000 Americans died from drug-induced deaths. While motor vehicle crashes still kill more people every year — with 45,000 in 2006, it was still the No. 1 accidental killer in the nation — those rankings are quickly reversing, state by state.

In 2003, eight states had more drug-induced deaths than car crashes. In 2006, it went up to 16 states. Washington’s drug deaths outpaced car accidents for the first time in 2004, when 695 Washingtonians overdosed and car wrecks killed 679.

Methadone, once used exclusively to treat heroin addiction, now accounts for the majority of overdoses, thanks to its reclassification earlier this decade as an “analgesic,” meaning a painkiller.

“This is a real problem,” he says. “In the last 10 years, there’s been a real significant growth in prescription drug overdose deaths. It’s pretty much all OxyContin.”

Back in Spokane, Aiken’s not sure when the deaths will plateau.

“It looks like we’re on the same bar,” Aiken says about the numbers from 2009, which should be published soon. “It doesn’t look like it declined. It might have leveled off, but I thought that last year, too, and we actually increased.”

For Jerry Fougere — who has seen the dramatic increase in prescription drug abuse firsthand at Lakeside Recovery — there’s only one solution to lowering the number of dead addicts: education.

“We’re under-informed, including the medical profession. They believed it was safe,” he says. “If we get the correct information out there, humans will make better decisions.”

As a society, we must begin, says Fougere, by being honest about other legal — and occasionally lethal — drugs: alcohol and tobacco. “We need to go to the root causes of addiction. … We market [alcohol], this psychoactive addictive substance, as a beverage. … For someone who’s vulnerable to being addicted, that’s where it all begins.”

For those people, addiction progresses, sometimes to prescription drugs. “There is nothing in nature that’ll make you feel like Oxy will,” Fougere says.

Fougere dismisses many chemical treatments such as methadone as being too simplistic, but he says drugs like Suboxone may offer some help in treating addicts.

“They say Suboxone is the silver bullet,” he says. His clinic works with a doctor who prescribes Suboxone. “They said that about methadone, too. Personally, I don’t think there’ll be a pill to fix this.”

Dr. Michael Lemberger, who ran an opiod treatment program at Rockwood Clinic until he retired a couple of years ago, sees it a bit differently.

“The beauty of this drug is it has a ceiling effect,” he says. “The more take you take, it has less and less of an effect, until you can keep taking as much as you want and it does nothing. Nothing. You can’t overdose on it. You can’t die from it.”

Another difference between the Suboxone and methadone is the price. A prescription for Suboxone costs about $400 per month, depending on the dose. For the same price, at the county’s methadone clinic, a patient gets full treatment — methadone, doctor’s visits, therapy, urine analyses.

And though it sounds perfect, it’s not: Suboxone can kill you if it’s mixed with a non-opioid, such as Xanax.

Whether chemistry works or not, Attorney General McKenna sees a different solution, one that edges toward the deliberative. He’s formed a prescription drug abuse task force.

“Topic No. 1 for that task force,” McKenna says, “will be how to put together a prescription monitoring program — what it will look like, how it will operate, how it will get paid for.”

“We are losing far more people to prescription drugs than we ever lost to meth,” McKenna adds. “Because these deaths occur quietly and are quietly reported, people have failed to grasp the magnitude of the problem. That’s one of the reasons so many people die. They don’t understand. If there are huge headlines every time someone died of a drug overdose — not just Heath Ledger or Michael Jackson, but everyone, everyday people — people might become a lot more careful. But as it is, people just quietly pass away.”

Lacey Jones’ ankle has been healed for eight years, and it’s been eight years since she was given her first prescription for Vicodin. Almost four years ago, scrambling for some pills, she went to the emergency room for a “headache” to get some heavy-duty painkillers. Her sister, Meg, saw the bill and asked why she went to the ER for a simple headache.

“At that point, it was like, OK, Meg. I’ve got a really big problem,” Jones says. For more than four years, Jones had kept her addiction from everyone — her friends, family, everyone. The same day her sister confronted her, Jones’ niece was born.

“I was in withdrawal when my niece was born — and that moment I saw her come into this world, I was like, ‘Oh, man. There’s more to life than getting high.’”

Jones quit cold-turkey and has been clean since. She now works for the Greater Spokane Substance Abuse Council as a drug-awareness community organizer. She’s spoken to thousands of kids in the area. Yet still she thinks about the pills. Just a couple months ago, she had a craving.

“Why is this coming up three and a half years later?” she asks. “It’s always in your brain: ‘I could take one and nobody would know.’ But if I did take just one, I would be done for.”

A longer version of this article first appeared in The Inlander.