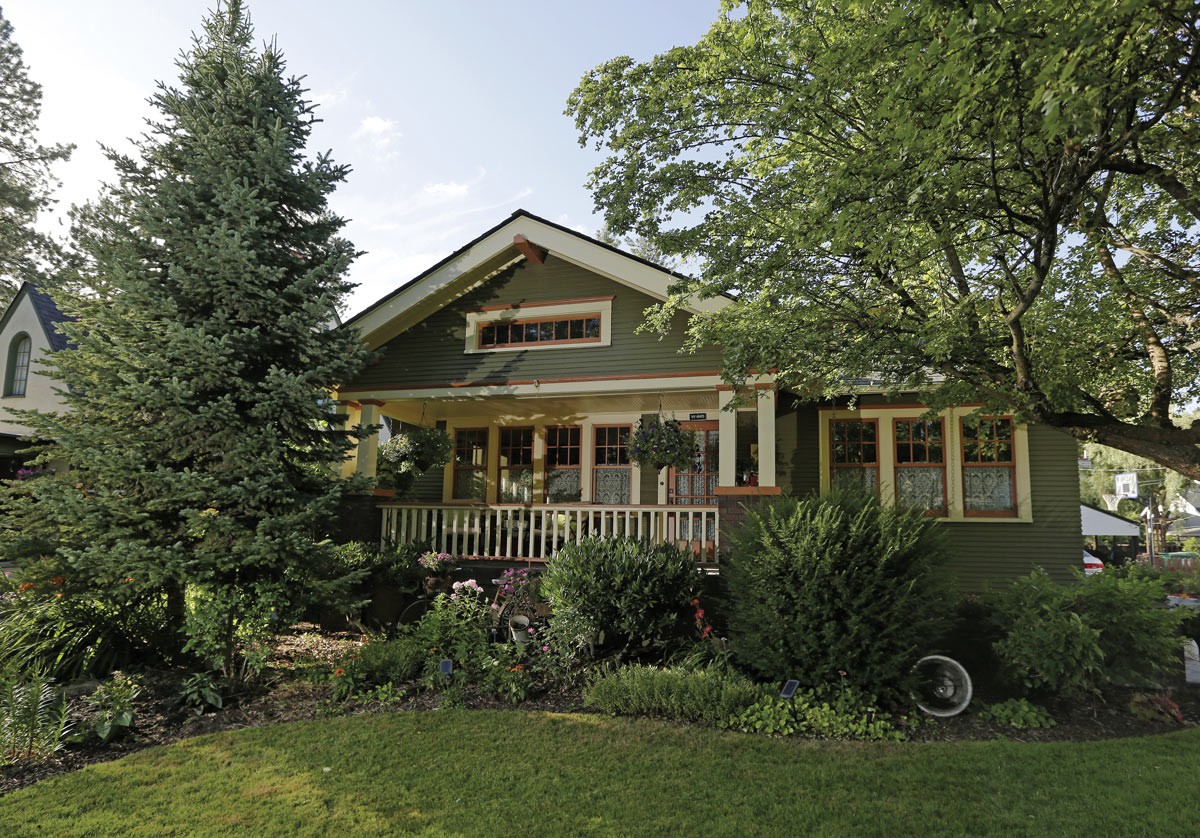 Megan Duvall wasn't necessarily looking for a historic home when she and her husband relocated to Spokane from western Washington seven years ago, but that's what they got: a 1925 Craftsman with its characteristic low-slung roof, clean lines, and squared columns supporting a wide, deep-set porch.

"We looked at about 10 houses in one day and found that this one was a great blend of old and new and was also in the Wilson Elementary school area," says Duvall, a mother of two who also has two rescue dogs. Although it looks like a Craftsman, says Duvall, prior owners expanded the home to around 4,000 square feet.

In addition to plenty of room for dogs, kids and their busy lives, her family's favorite features in the 1920s-era home include its high ceilings and closets with built-in shelves. Duvall really likes the gumwood trim in the home's living room and dining room — a hardwood found in many Spokane Craftsman homes.

Although she grew up in "a typical midcentury ranch style house" in east Spokane, says Duvall, she fondly remembers driving through the Manito, Cannon Hill and Comstock Park neighborhoods. She never dreamed she might one day live there, though her interest in Spokane's rich architectural history goes beyond wishful thinking.

Duvall, who has both a fine arts and preservation background, works for Spokane's Historic Preservation Office and with the Historic Landmarks Commission. Together, the organizations share a mission of "responsibility for the stewardship of historic and architecturally significant properties within the City of Spokane and unincorporated areas of Spokane County." 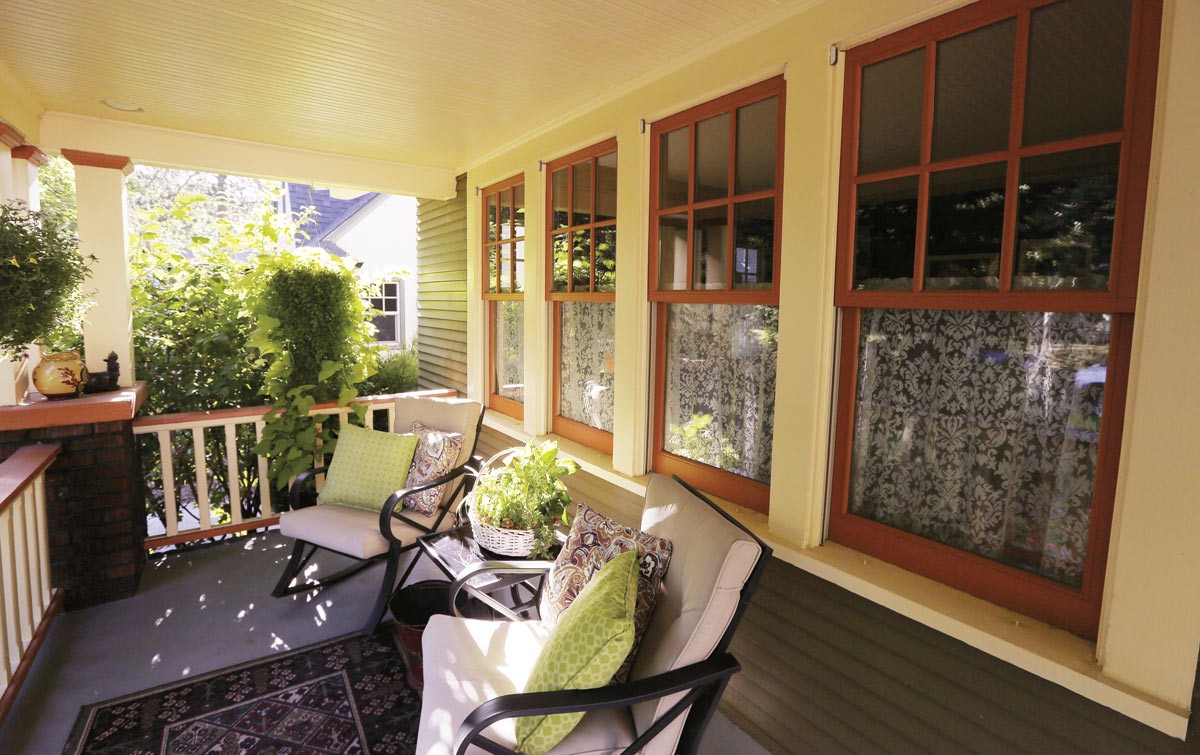 Young Kwak photo
One of homeowner Megan Duvall's favorite spaces at her 1925 Craftsman home is the welcoming front porch.

A large part of Duvall's job involves something called the Spokane Register of Historic Properties, a continuously updated list, now including more than 400 properties. Although most listings are residences, some commercial buildings and even entire historic neighborhoods are also included.

Unlike the National Historic Register, which does not have any regulatory influence, the Spokane Historic Register can, if necessary, get involved in contracts and enforcement for listed properties. That might happen if someone wanted to tear down a registered home and put up a four-unit condo, for example.

There are also a number of registers. A home can be on the National Register, a local register like Spokane's, Washington state's register, or a combination. And it can also be part of a Historic District, although that requires consensus among affected owners (Peaceful Valley, Browne's Addition and the cadre of warehouses on Desmet Avenue are all historic districts, for example).

Although SHPO has regulatory power, they really want to be more of a support system for owners of historic properties, says Duvall.

"I think the big picture, which is the important part to know, is this is the one chance to capture as much information about the property as possible," says Duvall. Many owners opt to work with consultants to complete the necessary paperwork, all of which can be found on the SHPO's website and becomes public record.

Typically, to qualify for the Register, properties must be at least 50 years old and fit one of five criteria. For example, one criteria is an association with a significant person. The Dodd House in East Central is on the listing because it is also known as Father's Day House, named for former resident Sonora Smart Dodd who's credited with creating dad's special day. 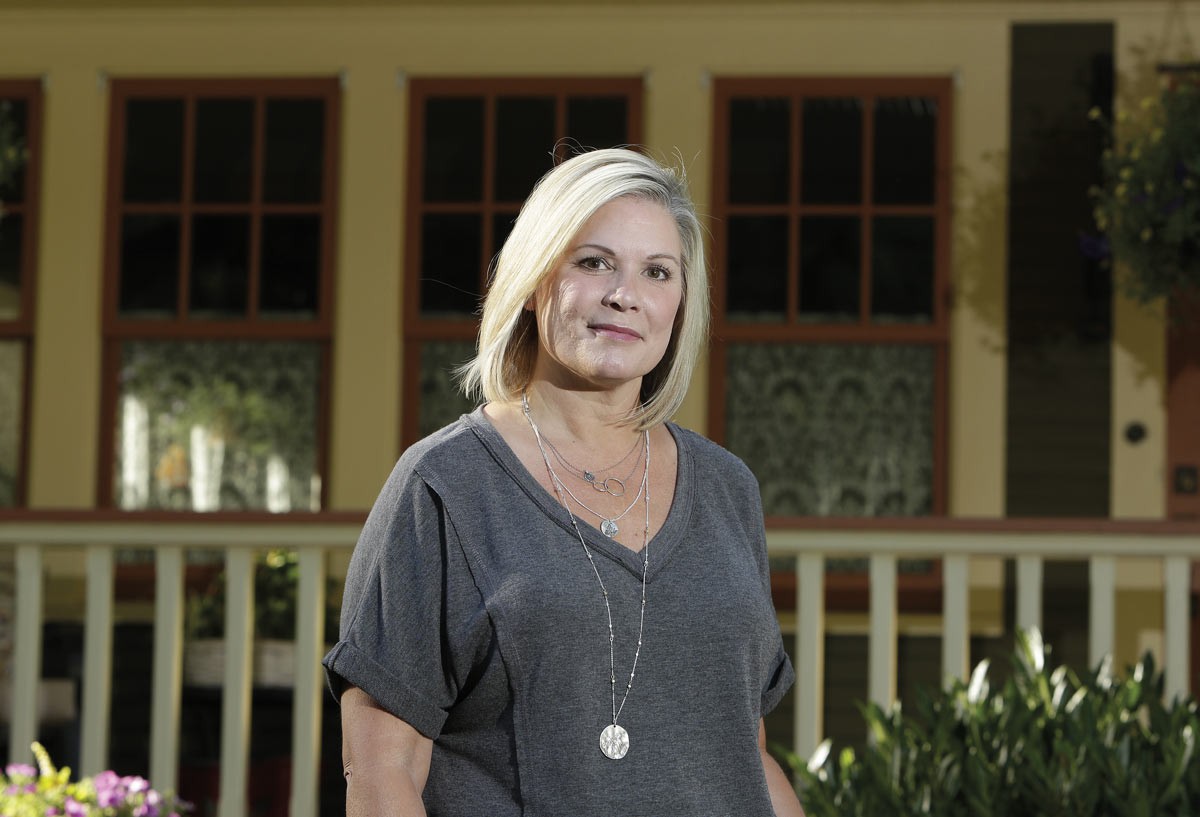 Another criteria concerns the home's architectural style or construction method, such as the Joel E. Ferris home, which embodies midcentury modernism.

The newest criteria deals with "intangible heritage," such as the German American Society building, which dates to 1892, highlighting the region's Deutsche traditions.

The SHPO recently applied for a grant relating to the East Central neighborhood, from Liberty Park to Freya, and the freeway to the bluff, says Duvall. Preservation can have a connotation of being about fancy houses and rich people, yet East Central has both architectural and cultural significance, so this is a new direction in the world of historic preservation, says Duvall.

"We're thinking about houses and buildings as boxes of stories," says Duvall.

If you ask Chelsea Jones about the stories from the historic Queen Anne style home she lives in with her fiancé (who is coincidentally Duvall's cousin), most of them are from her childhood. But Jones didn't inherit the house; instead, she purchased it when a chance encounter with the home's new owners rekindled a childhood desire.

Known as the Campbell-Jones house, the West Central residence used to belong to Jones' grandparents, who founded Donut Parade. But in 2013, when Jones was a young nursing student, her grandparents sold the place, which was in severe disrepair at the time.

"This house was the hub of our family for just about 40 years," says Jones, who spent many hours exploring parts of the home as a child, imagining how it originally looked and how she might restore it.

Dan and Annette Owens not only had the wherewithal to restore it, they spent six years doing so before putting it back on the market and taking on another historic home just down the street.

When Jones found out her grandparents' former, and now restored, home was for sale, she and her fiancé bought the Summit Boulevard residence, which the Owens had already gotten onto Spokane's Historic Register.

"It just felt really full circle," says Jones, whose young son now sleeps in her own father's former bedroom and whose father is delighted with his daughter's "new" older home. 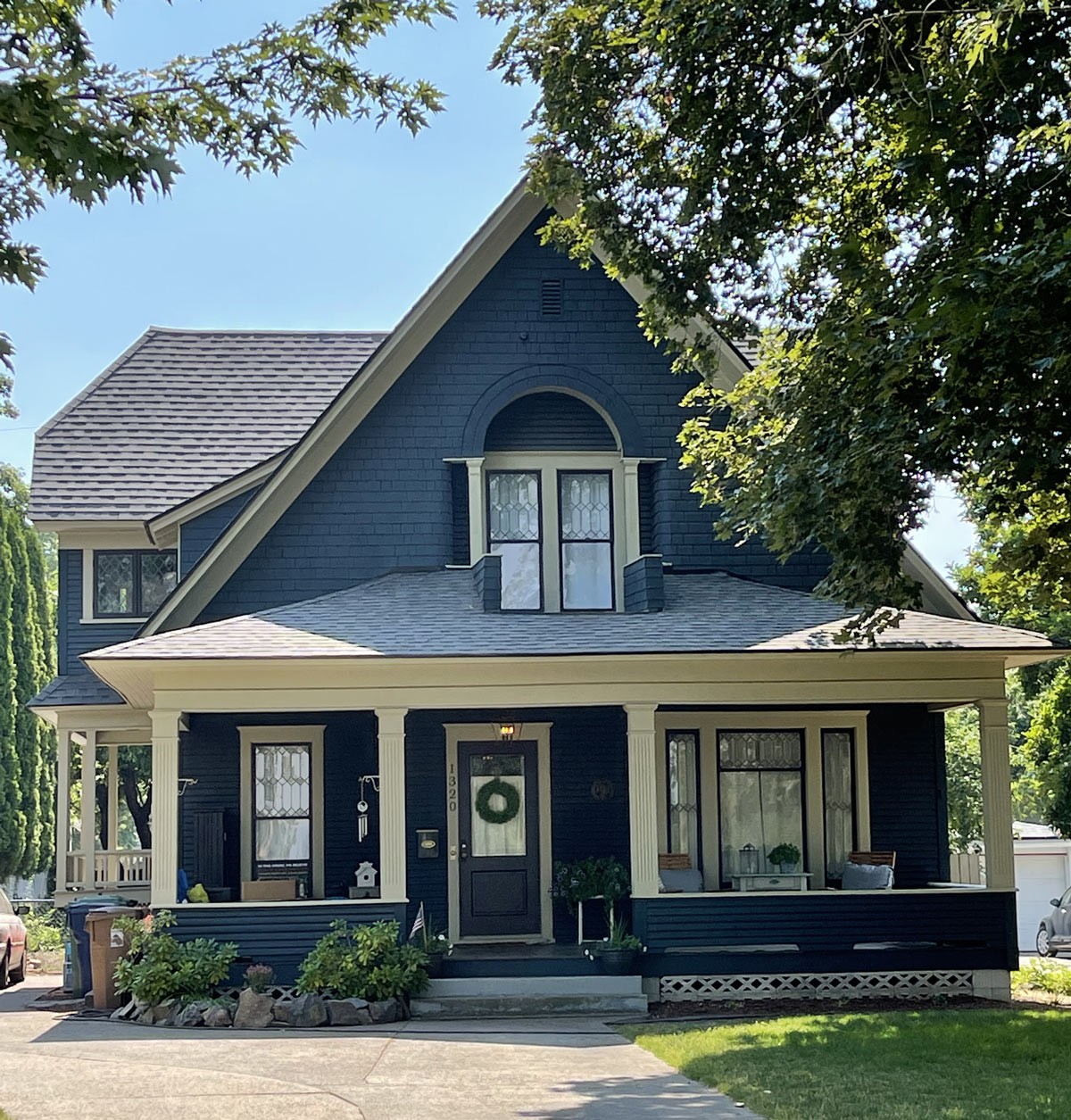 Anne McGregor photo
The style of the CAMPBELL-JONES HOUSE, built in 1904, is called "Free Classic Queen Anne." The house is on the Spokane Historic Registry as an "excellent example" of Spokane building techniques and design for its era. But it also is significant for being the home of Johnston B. Campell, a prominent Spokane attorney who served on the Interstate Commerce Commision in 1920s, and later, Keith and Kathryn Jones, owners of the Donut Parade. The home is now owned by their granddaughter, Chelsea Jones.

For Jones, preserving the legacy is a key motivator for being on the Register.

Qualifying homes are eligible to earn a federal tax credit or special, 10-year assessment to help balance the cost of necessary improvements. And because that involves the legal description of the home, the application process is quite involved, including a design review and City Council approval.

To get on the Register, a property owner pays a modest application fee and submits detailed documentation, including interior and exterior photos. Sometimes that leads to a misunderstanding about what homeowners can and can't do with a historic home. 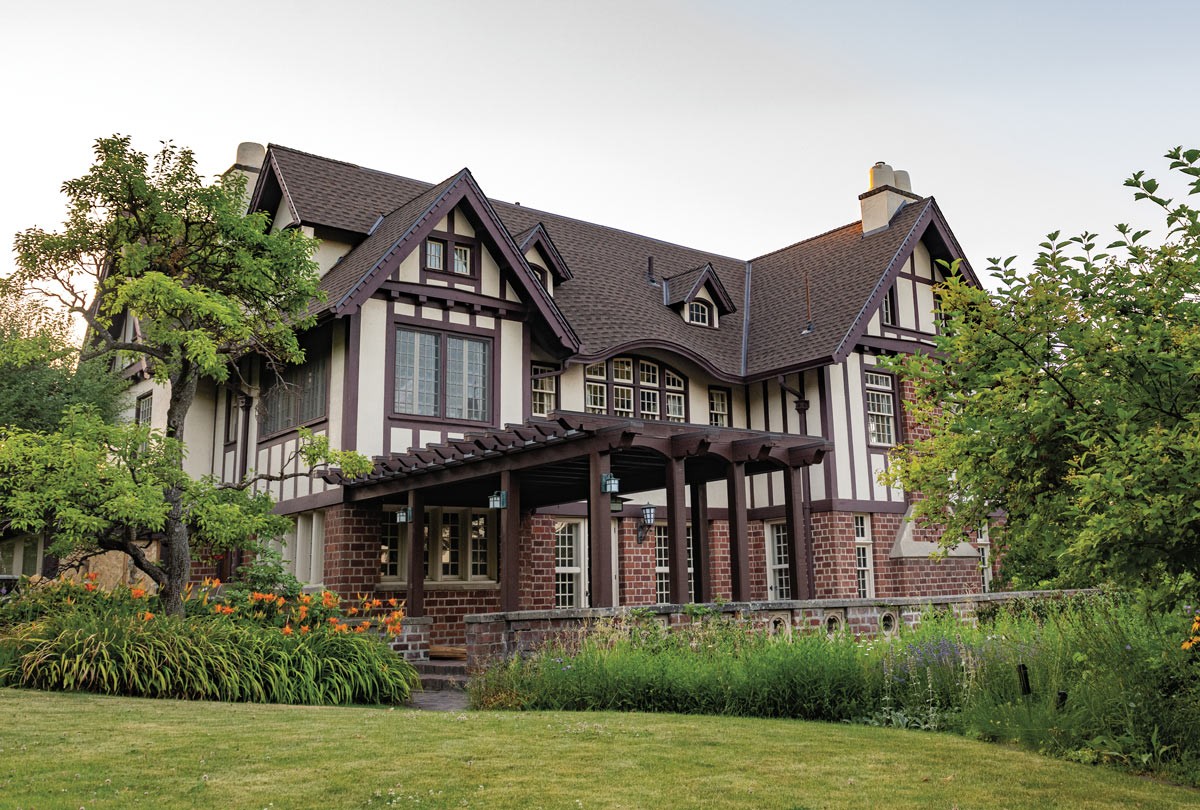 Erick Doxey photo
Built in 1912, the Nuzum House was designed by Kirtland Cutter and Karl Malmgren in the American Tudor Revival style, a nod to English architecture of the 1600s. In addition to the home’s classic half-timbering with stucco infill, elements of the style include the variegated red bricks, eaves with exposed rafters and groups of vertical pane windows. The original homeowner Richard Nuzum was a celebrated criminal defense attorney in Spokane.

"I think that people have always been hesitant [about applying to the Register] because they don't want to be told what to do with their property," says Duvall.

While she can recommend historically accurate paint colors — inside or outside — and point owners toward businesses (like Spokane's Revival Lighting) that specialize in restoration, homeowners have quite a bit of latitude, especially inside the home.

That's because SHPO, says Duvall, is most interested in preserving the exterior.

Owning a historic home, much less taking on a remodel, isn't an ideal fit for every homeowner, however.

For example, the Nuzum home has stood tall on Spokane's South Hill for more than a hundred years and landed on the Register in 2012, but recently languished on the market for several years. It's an exemplary American Tudor Revival home, designed by famed architect Kirtland Cutter with a classic Tudor façade of brickwork and dark timbered trim over light-colored stucco, steep roof and narrow, multipaned windows. It also boasts the first garage in the state — prior to that, homes might have had a detached carriage house.

For Monica Flaherty and Eric Contzius, the 1912 home offered a perfect opportunity to apply their restoration expertise. 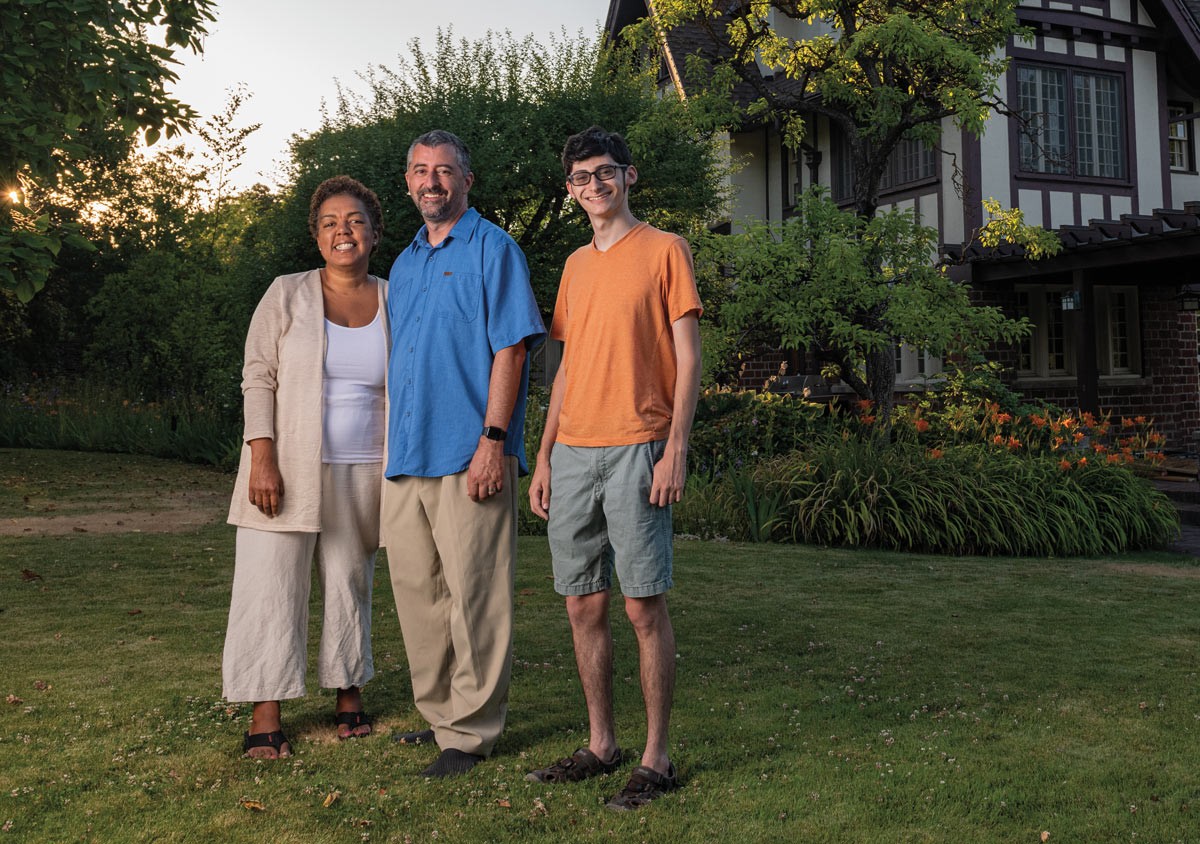 A Boston, Massachusetts, brownstone was the first project completed by Flaherty, who graduated from Gonzaga Prep and then attended Harvard. Since then, she and her husband Contzius have renovated a number of historic properties back East, and immediately saw the potential of the Nuzum house when they began looking for a house to move back to Spokane to be close to family and friends.

"We feel like we are more custodians than owners of this home," says Contzius, who acknowledges that restoring the house is a big project. Modernizing the home's systems is a first step; there's wallpaper to be dealt with, and plans to update the kitchen. Contzius says they are ready.

"We're going into this with eyes wide open," he says. "We don't buy and sell. We buy and hold."