Pretending To Be Mean

In the CdA production of Cinderella, Ellen Travolta is playing her sisters’ mother. But then, she’s used to bossing them around. 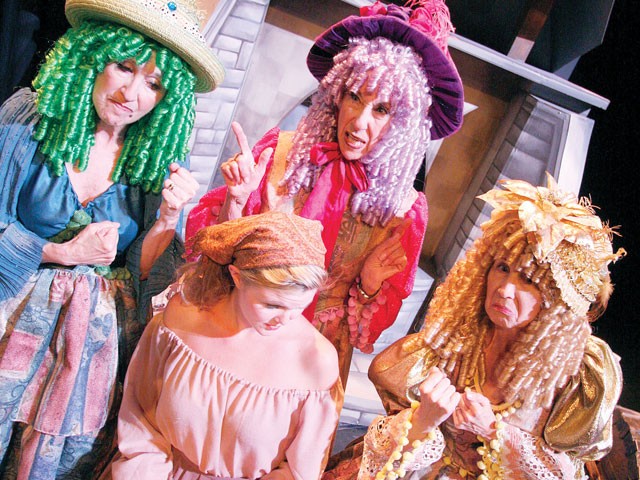 Young Kwak
Cinderella will feature the three Travolta sisters: Ellen as the evil stepmother, and Margaret and Annie as the stepsisters

Englewood, New Jersey, in the 1950s. An Italian- Irish working-class family. Salvatore ran a tire business; Helen taught high school drama and directed at community theaters; and Ellen — the eldest of their six kids, the responsible one — got stuck with much of the housework. “Saturday mornings were for cleaning house,” she recalls. “I had the ironing — I had to do all the white shirts for my brothers and sisters in Catholic school — and I had to clean the tub.”

Ellen was acting as a kind of surrogate mother toward her younger siblings, so when sisters Margaret and Annie appear as Ellen’s daughters in Cinderella (at Coeur d’Alene Summer Theatre, July 3-17), they’ll be falling into some old family roles.

Last year, when CdA’s artistic director, Roger Welch, decided to produce Rodgers and Hammerstein’s Cinderella with Ellen as the wicked stepmother, Ellen recalls saying “to Roger — jokingly — ‘Wouldn’t it be hysterical if my sisters were the stepsisters?’ And he laughed. And then he came back a little later and said, ‘I think it’s a brilliant idea.’” The youngest of the six Travolta children — you may have heard of him, his name’s John — thought it was a great idea, too. (Enough so that he’ll fly into town to take in a performance, though the sisters are coy about revealing exactly when.)

This is the first time onstage together for all three Travolta sisters (who are, let’s say, all in their 60s or just past them). In a dual number late in the show — “When You’re Driving Through the Moonlight” and “A Lovely Night” — all three Travolta sisters sing along with Cinderella (Jessica Skerritt). Margaret, the middle sister, admits the songs are musically challenging, partly because “it’s been 42 years since I’ve been onstage.”

As Cinderella retells the story of the fancy ball at the prince’s castle, “We think she’s telling us what it would have been like,” Margaret says. “We don’t know that she had actually been there. And we sort of fall into her fantasy, and we’re nice to her. It’s a pivotal point, because even though we don’t like her, we lose ourselves in her dream. There are some harmonies in there, and four-part harmonies are kind of hard to pull off.”

This CdA production is based on the 40th-anniversary movie version from 1997 that starred Brandy, Whitney Houston and Bernadette Peters. Among other revisions, the prince (here in CdA, played by Andrew Ware Lewis) meets Cinderella while disguised as a peasant, and, after rebelling against her stepmother’s cruelty, Cinderella intends to run away from home until her fairy godmother (Megan Maddox) persuades her instead to confide in the prince.

Ellen describes the stepmother as “very mean. But when you have a good fairy tale, you need a good villain.” For her characterization, she’s drawing on the likes of Mama Rose, Norma Desmond, Joan Crawford and Bette Davis.

“She’s just cruel,” Ellen says. “At one point, Cinderella kneels near her, and she just says, ‘I want my real daughters, not you. You go tend to the fire and serve us tea.’” But Ellen will display another side of the stepmother’s personality, too: “She’s very silly — she loves her girls, who are two duds.”

The stepsister duds have ironic names — Grace (Annie) is awkward, while Joy (Margaret) is sullen — but they also get to be “a little more gregarious, with more of the comedy,” says Ellen.

All the fun-loving goes back to New Jersey in ‘50s. “We’d sit on our front porch and watch the people in our neighborhood go by,” Ellen says. “And my mother was a great mimic. That’s how it all started — that’s how all of us got into acting.”

Margaret remembers how “I would do Mr.

Delaney — he wasn’t nice, he was kinda tough. He was a painter, with a kind of gruff voice. And he had eight, 10, 20 kids — it was an Irish Catholic family.”

For the next two weeks in Coeur d’Alene, the three Travolta sisters will be putting on a show, just as they did back in the old neighborhood. “After dinner, we would march into the basement,” Margaret recalls.

“Dad had built a little theater for mom in the basement, with drawstrings and little wing areas. We’d have a trunk full of costumes, and the music would be from LPs, and we’d put on songs from Gypsy, Carousel and West Side Story. So for us, doing this, it’s like play.”