A YouTube video by a Spokane man sparked an international movement to support gay youth. 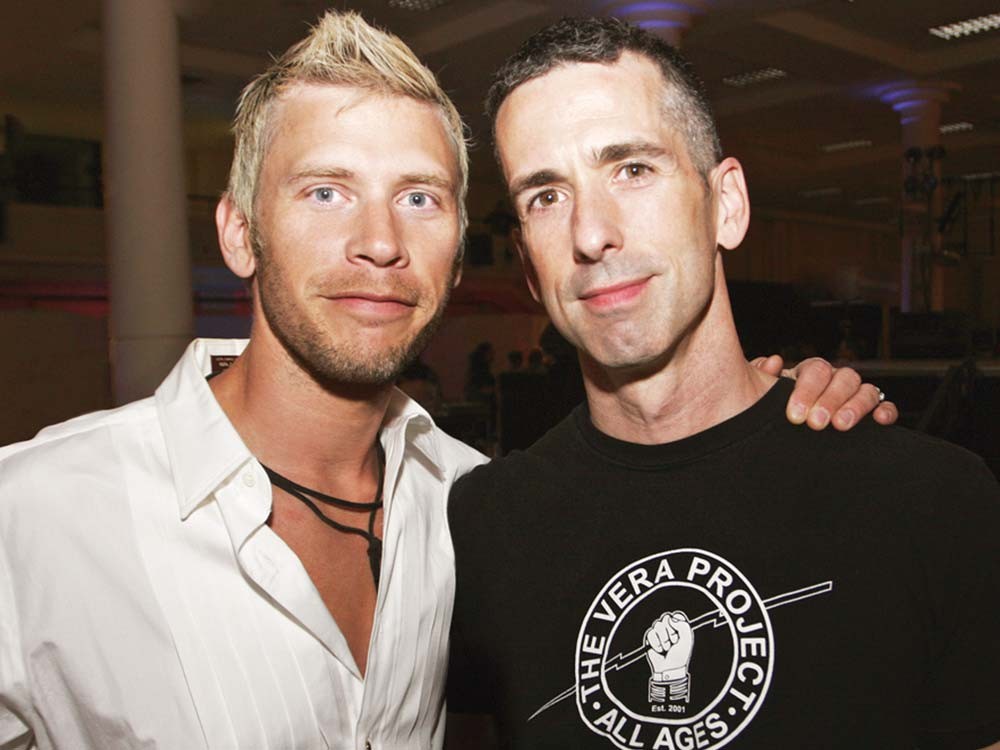 They took a dump on his car. They broke his windshield, called him a fag. Terry Miller was just another kid from Spokane in the 1980s. He dyed his hair blue like Robert Smith of the Cure. He listened to new wave and goth. He got good grades. But he was cruelly persecuted for being gay.

That was until he graduated. He left Spokane for Seattle and met a man named Dan Savage, who would later become the editor of The Stranger and an internationally syndicated columnist. They have now been together for 16 years, they have a 13-year-old son, and they were recently named the grand marshals of the New York City Pride Parade.

The couple rose to prominence in the gay rights movement last year after posting a YouTube video promising a brighter future for young people who are gay. The video was prompted by a rash of nationally reported suicides by gay teenagers — some only 13 years old — who had been bullied. Miller and Savage’s video had a simple message: Life after high school gets better. Times might be tough right now, but everything changes once you leave that social feeding frenzy.

Within three days, their video had inspired a thousand video responses. A week later, there were more 3,000. Within three weeks, President Barack Obama himself posted a video.

We spoke with Miller, who will appear with the It Gets Better Project next week at Shadle Park High School, about the project and his return to the halls of his high school.

INLANDER: You said in your video that your high school was miserable, that Spokane is a mid-sized town with a small-town mentality?

When did people start picking on you?

Pretty much my sophomore year. The jocks started snickering, name-calling and writing stuff. I was shocked and frightened, because there was nowhere to turn to. There was no one to talk to.

Was the administration aware you were being picked on?

Absolutely. When my mom asked the administration what the hell is going on, they said ‘He looks that way, walks that way, talks that way, acts that way, and there is absolutely nothing we can do about it.’ Bullying was an issue that hadn’t really been exposed. The school was just as puzzled by it as my mom was.

Did you ever feel suicidal?

I never felt like I wanted to kill myself, I just never got to that place, but I certainly understand how you can get to that point.

Did you come out of the closet in high school?

Was it empowering when you came out to your friends?

It made my social life easier and that part of high school much more bearable. But coming out is really hard and painful, and I would never just tell a high school kid to come out. You never know how parents are going to react. High school is very tricky and you have to tread that water very carefully or worse things might happen.

Dan had been writing about the teen suicides, and he was doing a college speaking tour, and on the way home he thought, ‘No high school would ever let me speak to them, so how are we going to reach these kids?’ Then we realized we don’t need the permission of school administrators or parents or anybody. We can go right into these kids’ computers and their phones with this video.

It was a historical thing watching the president of the United States in the Oval Office speaking directly to not just gays and lesbians, but gay and lesbian youth, telling them their lives are of value.

And the project has since turned into a resource book, “It Gets Better: Coming Out, Overcoming Bullying, and Creating a Life Worth Living.”

The book is a really good crosssection of essays from males, females and transsexuals. We wanted it to be a resource for kids to find help.

But is it difficult to tell kids to wait? Why can’t you tell them to do something about their struggles now?

We’ve gotten a lot of slack for that, but what else can you do? We’re telling kids to wait and we’re actively working to make things better. Any money that the It Gets Better Project sees supports the Trevor Project, a suicide prevention hotline, and GLSEN, who creates gay-straight alliances in schools, and the ACLU that helps to sue the f--- out of schools when they are doing something wrong to gay and lesbian kids.

How do you feel about coming back and speaking at your high school?

It’s going to be totally weird, but I think it will be cathartic and healing for me. When I found that the school has a gay-straight alliance, I was totally shocked. I think the group is just so incredible and I’m really proud of them.

Any advice for a kid growing up in Spokane that feels the same way that you did?

[laughs] I’d want to say get the f--- out! But no, I would say get your education so you can just get away. Spokane isn’t the endall be-all. It’s a nice city to grow up in, but it’s not the last place on earth.

What does the Supreme Court's ruling on same-sex marriage discrimination mean for a Washington florist?

Gay marriage around the globe

By Jordy Byrd and Tiffany Harms