Ever wonder what it's like to become a princess for a living? These Spokane women can tell you 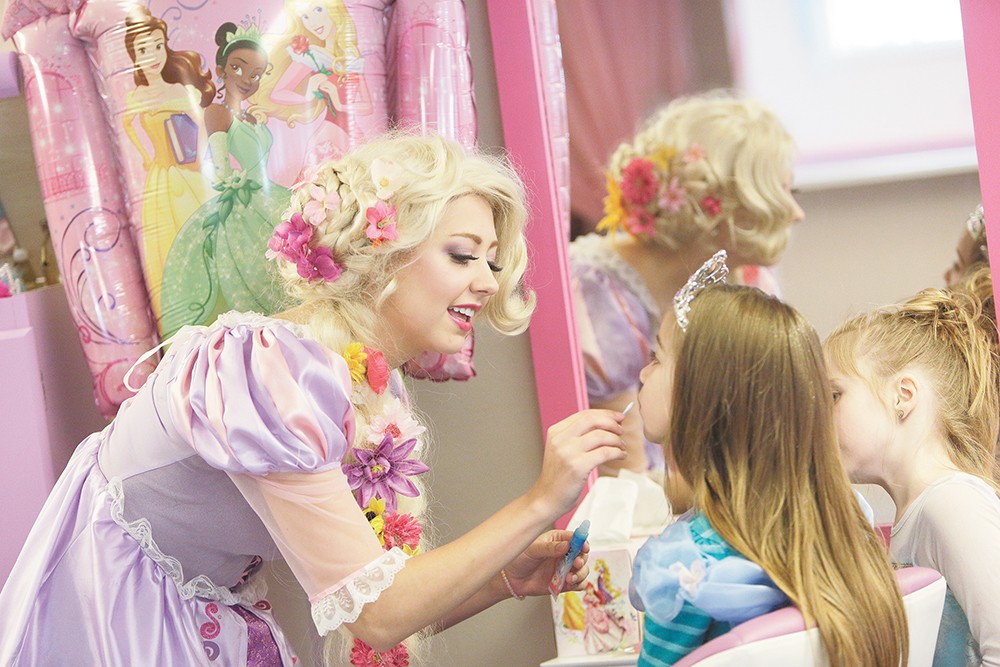 Young Kwak
In the role of Rapunzel, Lauren Block entertains a group of young girls during a recent princess birthday party.

"One time, I watched a movie about you!" proclaims 5-year-old Piper Lee.

"Oh my gosh, you don't even know!?" Piper replies in exasperation to the perplexed princess, whose long braid hangs over her shoulder, down past her waist.

"What do you know about my life?" Rapunzel says in mock surprise to Piper.

The opening chords of the theme song from the Rapunzel Disney adaptation Tangled blare from a set of speakers. The princess bends down toward the girls gathered around her and bursts out gleefully, "Come sing with me!"

Piper and three other little girls, each wearing their own princess gowns picked from a nearby armoire, giggle and bounce around Rapunzel's flowing, lilac-colored skirts.

Played by 21-year-old Whitworth University student Lauren Block, the princess has left her tower of exile to journey — by carriage, she tells the girls — to the frilly pink basement of a Spokane commercial building. The princess has been summoned there to help celebrate Neveah Matlock's ninth birthday. She puts glitter in the girls' hair, reads them a story and plays games, never breaking character throughout the hour-long performance.

A lifelong fan of Disney's enduring princess stories, Block first started dressing up as her favorite characters to entertain at kids' events three years ago. With a background in vocal performance and some stage acting experience, she now works for local party venue A Dream is a Wish Princess Parties.

Owned by 23-year-old Alyssa Miller, it opened about two years ago. Miller, who also acts in character, usually as personal favorite the Little Mermaid, bought the business from its previous owners in March of this year. A part-time cast of seven young women and one man take on roles as a host of characters heavily based off those in Disney's most popular princess and fairy-tale films.

But because A Dream is a Wish and countless other entertainment ventures like it across the country don't have licensing rights from Disney to market these characters, they can't refer to them by their recognized film names. The only exception is if the character's name and story, like Rapunzel's, are based on a classic fairy tale in the public domain. Others include Snow White, Sleeping Beauty and Cinderella.

These princesses from Disney's animated features, with their impeccable hair, makeup and body shapes, are arguably more popular now than they've ever been, and the entertainment behemoth hasn't stopped introducing new leading ladies — the Frozen sisters and Brave's Merida in the past five years, plus the forthcoming Polynesian princess Moana.

"This business is definitely based on showing love to kids, not just dressing up as a princess," Miller asserts. "You have to have a passion for kids."

More often than she plays any other character, Block dons a sparkly blue gown and platinum blonde wig. Without question, the company's snow queen character and her younger sister the snow princess — better recognized by kids as Frozen's Elsa and Anna — are its most popular requests.

in Spokane Valley that began three years ago is part of this popular trend for kids' birthday parties featuring a royal lady in ball-gown regalia.

Wish Upon a Star Princess Parties bills itself as a "character entertainment company," and takes the portrayal of its princesses as seriously as the Disney theme park jobs they're based on.

"We get a lot of 'Oh, you play dress-up for a job?'" says Wish Upon a Star owner and founder Hayley Schmelzer, who's 25. "But getting around Disney is not our goal, and we would never want to steal material that isn't ours," she continues.

Costumes and wigs worn by actresses with her company are special-ordered, and often custom-made to be as close as possible to the quality of those worn in Disney's parks. Yet carefully stated, in all marketing materials, is that Wish Upon a Star's characters are "inspired by" those made famous by the entertainment giant.

"The reason I started this initially wasn't to make money, it was an opportunity to give back to the community," Schmelzer explains. "We do hospital visits, go to National Adoption Day events, and we take characters to events for local foster families."

While some parents may be hesitant to let their kids buy into the unrealistic personas projected by popular princess characters, Spokane Valley mom Amanda Daniels views the princess party business model favorably, overall. Even so, she's had some reservations as a parent over the messages many princess stories can send to young girls. Her daughters, ages 6 and 8, have been to several of Wish Upon a Star's events. She says that even though they like princesses, her girls have varied interests in things considered both "girly" and not. They've also recognized, on their own, the admirable traits of some of these fictional characters, like being brave, kind or true to oneself.

"My girls have seen characters on Disney cruises, at Disney World and at these events, and I've found the [local] princesses actually better than the cruise and Disney World. They're much more personable — they sing, too — and they interact with the girls," Daniels says.

As with its local competitor, the Spokane Valley venture offers on-site events, with two themed party spaces, and a large parents lounge. Both companies also can send their characters to off-site events at homes or in parks. Pricing for these parties ranges between $175 and upward of $200, depending on the venue, and how many characters are present. Additionally, both businesses occasionally host ticketed public events, such as a princess pajama party, tea parties and meet-and-greets.

Both young women who offer these princess party experiences are passionate about increasing local kids' access to similar moments that are so treasured from their own childhoods; going to Disneyland and meeting their favorite characters.

"There are people here in Spokane who don't have the money, or time or resources, to take a trip to Disneyland or Disney World," says Miller, of A Dream is a Wish.

This is true of families like Nevaeh's, the 9-year-old birthday girl celebrating with Rapunzel. Neveah's grandmother, who booked the party, says their family probably won't ever go to Disneyland, so this is her only way to meet a princess.

"To make their dreams come true without having to get on a plane, that's really special to me," Miller continues. "What I wouldn't give to have been able to meet a princess in my community growing up." ♦