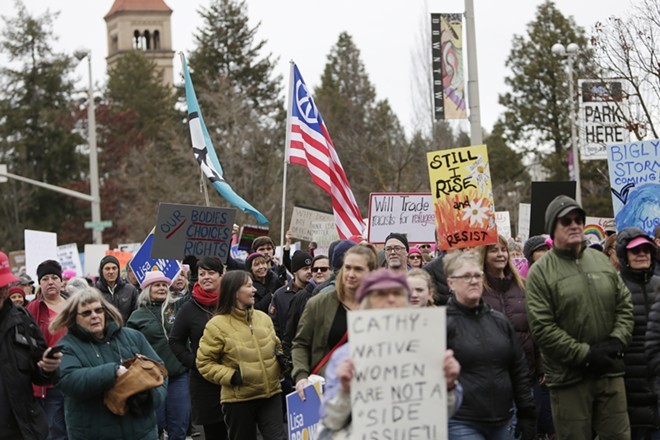 Young Kwak photo
A rally Tuesday, May 21, 2019, will bring together Spokane groups that fight for a woman's right to choose, including the Women+s March on Spokane.

As part of the National Day of Action to Stop the Bans, a collection of nonprofits and providers who fight for abortion rights will be holding a rally Tuesday evening in Spokane.

The rally is being put on by NARAL Pro-Choice Washington, Planned Parenthood of Greater Washington and North Idaho (PPGWNI), Raíz of PPGWNI, Women+s March on Spokane and Spokane Indivisible.

"This day of action comes at a critical juncture in the fight for reproductive freedom and justice, as anti-choice politicians push laws infringing on personal decisions that should be left to womxn and their doctors," the groups announced Monday. "Compounded by Donald Trump’s stacking of the Supreme Court and federal judiciary with justices who are hostile to Roe v. Wade this issue will affect future generations to come."

While Washington state has strengthened protections for abortion coverage by insurance companies, more than a dozen states have passed or are considering abortion bans of some form in recent months, Sarah Dixit with PPGWNI explains.

Many of the bans are so-called "heartbeat bans," preventing abortion after about six weeks, which is before many women know they are pregnant. Others ban abortion outright.

"This is an unprecedented attack on reproductive health and justice," Dixit says. "A lot of this is trying to move it to the Supreme Court to overturn Roe v. Wade. We think it’s important to bring that to people’s attention. It’s time to start fighting really hard."

Dixit notes that while Washington may seem like a securely pro-choice state, it only takes one election cycle to change that.

"We have to be in coalition with one another and support people all across the nation and not just focus on ourselves," Dixit says. "Especially when this will impact so many people regardless of where they are located."

The rally is scheduled to take place from 5:15 pm to 6:15 pm Tuesday, May 21, at the Spokane Tribal Gathering Place next to City Hall.

The organizations are working to find speakers from impacted communities who can tell the crowd about their own experiences and what the bans mean to those who will be impacted.