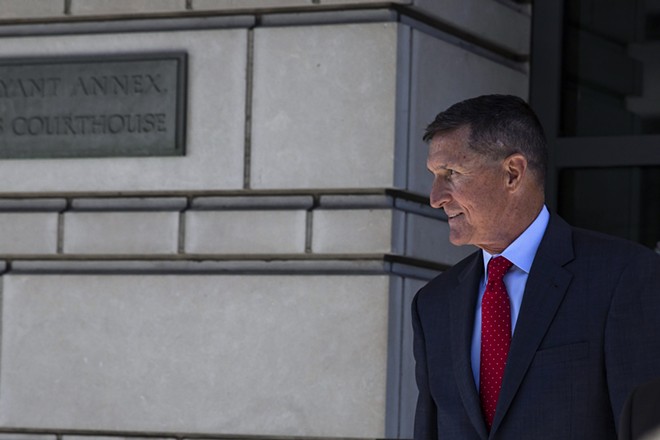 Samuel Corum/The New York Times
Michael Flynn, President Donald Trump's first national security adviser, leaves federal court in Washington after a sentencing hearing on July 10, 2018. Federal prosecutors recommended on Tuesday, Jan. 7, 2020, that Flynn be sentenced to up to six months in prison for lying to investigators in the Russia inquiry, a reversal that came after he backed off his cooperation deal and even began suggesting that he had not committed any crimes.
By Adam Goldman
The New York Times Company

WASHINGTON — Federal prosecutors recommended Tuesday that President Donald Trump’s former national security adviser Michael T. Flynn be sentenced to up to six months in prison for lying to investigators in the Russia inquiry, a reversal that came after he backed off his cooperation deal and even began suggesting he had not committed any crimes.

The recommendation is a setback for Flynn, a retired Army lieutenant general whose guilty plea in late 2017 marked a stunning downfall. He provided extensive information to prosecutors, who recommended leniency in late 2018. They revised their position after he assumed a more aggressive posture over the past year.

Flynn had pleaded guilty to lying to the FBI about his conversations with the Russian ambassador to the United States and faced up to six months in prison. Prosecutors did not push for prison time, however. At a sentencing in late 2018, he pleaded guilty again but decided to postpone the proceeding so he could maximize his help to prosecutors in hopes of getting the most lenient sentence possible.

But he also fired his well-respected lawyers last year and hired a truculent former federal prosecutor who embraced right-wing conspiracy theories suggesting Flynn had been a target of a politically biased FBI cabal.

Prosecutors had once praised Flynn’s efforts to assist the special counsel, Robert Mueller.

The tone of prosecutors in their newest memorandum was dramatically different.

“Far from accepting the consequences of his unlawful actions, he has sought to blame almost every other person and entity involved in his case, including his former counsel,” prosecutors wrote of Flynn.

They also pointed out his “apparent failure to accept responsibility” and “his failure to complete his cooperation in — and his affirmative efforts to undermine” the prosecution of Bijan R. Kian, Flynn’s former business partner who was charged with violating foreign lobbying laws.

Flynn was supposed to testify on behalf of the government in that case but changed his story on the eve of the trial. A jury convicted Kian last year, but a federal judge later threw out the charges, saying prosecutors failed to make a strong enough case.

Flynn’s lawyers say he has fully cooperated with prosecutors.