NATION: According to a new report issued by more than a dozen federal agencies, climate change will have a significant negative impact on the U.S. economy by the end of the century if changes aren't made to reduce the effects. 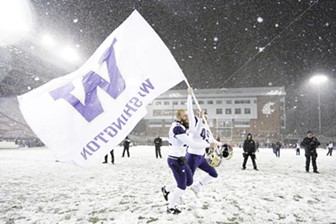 Activists plan to block homeless eviction outside City Hall
After homeless protesters who are against Spokane's sit-lie ordinance were told they can't camp in front of City Hall, other activists planned to rally around them this morning to prevent the city from moving them along. (Spokesman-Review)

Tear gas deployed as migrants try to pass into San Diego
In attempts to push back a group of people trying to pass from Mexico into the United States, U.S. border protection officers used tear gas to keep the group from moving toward barricades. (New York Times)