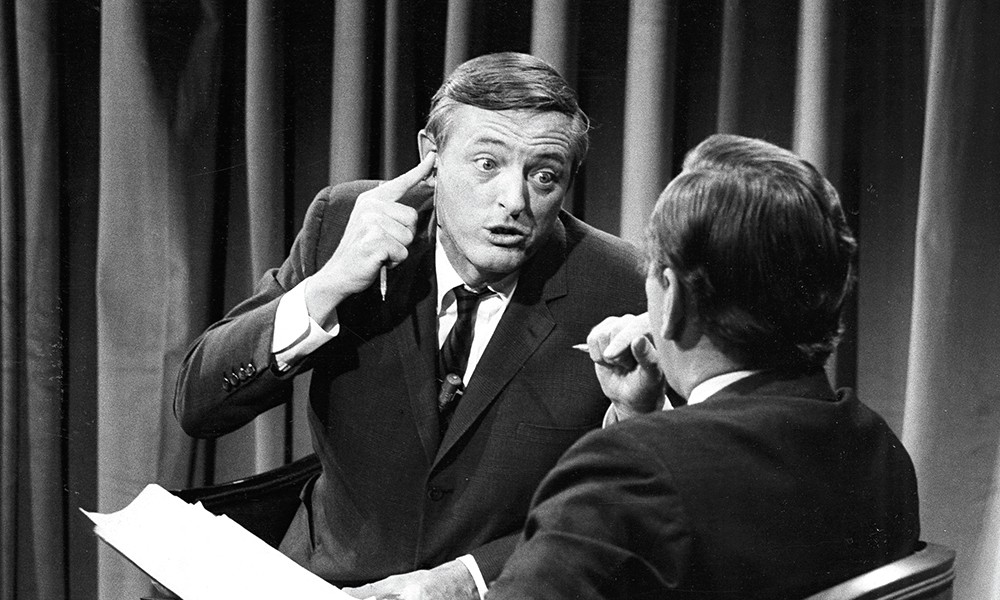 William F. Buckley, Jr. gives Gore Vidal a piece of his mind during a 1968 debate.

Given the screeching nature of what passes as modern political punditry on television,

it might be hard to remember — or even imagine — a time when the airwaves were filled with Serious People talking about Serious Issues facing the country during election season.

Best of Enemies takes us back to the precise moment when campaign coverage turned from straightforward and stiff to entertaining and, arguably, less relevant as it recounts ABC News' dramatic ratings gamble in 1968 to skip gavel-to-gavel coverage of the Democratic and Republican conventions in favor of a new, untested feature — a series of 10 debates between the arch-conservative magazine editor William F. Buckley, Jr. and ultra-liberal author and iconoclast Gore Vidal.

Directors Morgan Neville and Robert Gordon effectively educate viewers on the stakes in 1968, when Richard Nixon took the GOP nomination at a sunny Miami convention, and Hubert Humphrey took the Democratic nomination at a Chicago convention marred by police violence against anti-Vietnam War protestors in the streets.

Buckley and Vidal, though, are the mesmerizing stars here, representing the country's right and left wings with erudite charm and genuine venom aimed at each other's arguments through 10 rounds of quick-witted verbal sparring. These two hated each other so much that they continued fighting in print and in courtrooms for years after the 1968 debates, so dangerous did they find the other's view of where America should be, and so offensive did they find each other's points of view.

Using clips from the debates and interviews with a number of academic and media experts — including Christopher Hitchens, Dick Cavett and Andrew Sullivan — the directors illustrate the remarkable debating skills of both men, as well as their differing styles. Buckley was a towering intellect who felt confident going into the debates with little preparation, while the equally astute Vidal prepared meticulously, including preparing his zingers meant to take advantage of the medium by giving him the most memorable one-liners.

The directors avoid choosing who "won" the debates, although Buckley was pushed to fire a personal insult at Vidal that would get him banned from most TV outlets in 2015. Instead, they do a remarkable job showing how this unusual (for the time) effort to juice ratings worked out great for ABC News, but cost America a future of reasoned, articulate political discourse, replaced by the current shoutfests on Fox, CNN and elsewhere.

The fact that Best of Enemies is so fun to watch makes that depressing takeaway all the more powerful. ♦

Best of Enemies is not showing in any theaters in the area.