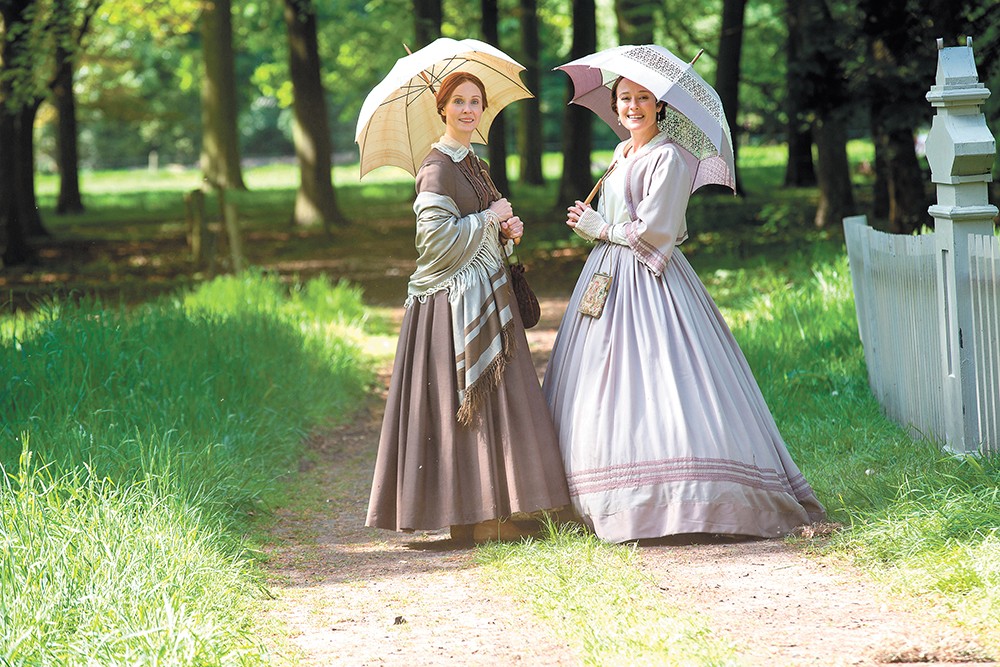 Unlike most films about great artists, A Quiet Passion is about repression rather than expression.

It chronicles the lonely, unfulfilled life of the poet Emily Dickinson, from young adulthood to her death in 1886, and it's fascinated with how she related to a world that didn't have much need for her. After all, in mid-19th century Massachusetts, the idea of a woman publicly expressing her fears and desires, either out loud or in print, was considered the ultimate impropriety.

The film's title most obviously refers to Dickinson's predilection for poetry, much of which she wrote in seclusion or late into the night, and then only after her father reluctantly granted her permission. But it could just as easily apply to the style of writer-director Terence Davies, which is (at least here) hushed and unhurried, but nonetheless imbued with terrific affection for and interest in its subject.

Although it's set in drawing rooms, dimly lit parlors, ballrooms and opera house balconies (cue the fluttering fans), this is no traditional period piece, and a lot of that is due to Cynthia Nixon's fascinating, complicated interpretation of Emily Dickinson. It's a surprisingly physical performance, especially as she succumbs to the kidney disease that would eventually kill her, and it dashes many of the preconceived notions we may have about the poet.

What might be most surprising about A Quiet Passion, though, are its modern sensibilities. We first meet Emily as a teenager (played by Emma Bell, who, at one point, morphs into Nixon through remarkable optical effects), as she refuses to bend to the intellectual rigidity of her religious upbringing. Suffering from, as she puts it, "an acute case of evangelism," she willingly relegates herself to a life of spinsterhood with her sister Vinnie (Jennifer Ehle) in their family home in Amherst.

It's not so much that Emily is protesting the notion of religion (she devoted many of her poems to it), but rather the fervency with which her elders employ it to justify their ignorance. She similarly fights back against the sexism of the era, particularly from her brother Austin (Duncan Duff), who admits that he would never forgive his wife of infidelity as he carries on an affair of his own. In one of the few exchanges Emily actually has about her own writing, she excoriates an older male publisher who alters her punctuation to apparently make her meanings clearer. "Clarity is one thing," Emily tells him, "but obviousness is quite another."

We tend to think of Dickinson as the death-obsessed recluse whose massive body of work went undiscovered during her lifetime, and that characterization is partially true. But there's a playfulness and dry wit present in her verse that often gets overlooked; her morbid streak was often as playful as it was genuinely mournful. This film follows suit; there's a sense of mischief in its withering evisceration of 1850s social mores, and its dialogue is as snappy as anything in Whit Stillman's recent Jane Austen riff Love & Friendship.

It doesn't avoid all the pitfalls of the biopic format, however: There are perhaps a few too many scenes in which the same basic points are reiterated, and some awkward expository dialogue is shoehorned into the proceedings, particularly in an uncharacteristically ham-handed interlude involving the Civil War.

Davies is one of the great humanists of contemporary cinema, and his earliest films — the semi-autobiographical domestic snapshots Distant Voices, Still Lives and The Long Day Closes — develop their own distinctive cinematic grammar, channeling the fluidity of memory and consciousness. Compared to those works, A Quiet Passion is one of Davies' more straightforward narratives, but it still bears many of his stylistic watermarks: his liberal use of voice-over (mainly to showcase Dickinson's poetry) and montage, his emphasis on music and lyricism, his theatrical lighting and staging.

But Davies' sometimes flowery approach doesn't rob the film of its rawness. Dickinson once wrote about hearing a fly buzz upon dying, though her own death was certainly not as beautifully macabre as her poetry. Hers was a short life, blunt and cruel and often unfair, and A Quiet Passion accurately and painfully chronicles it. Dickinson is neither canonized nor pitied here, which is most certainly how she would have liked it. ♦

A Quiet Passion is not showing in any theaters in the area.