The pastor of Salem Lutheran Church, which now houses a homeless warming shelter, grapples with the tensions between faith and politics 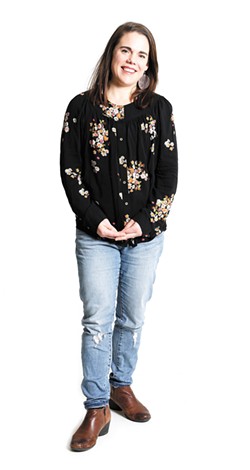 When the city of Spokane scrambled to locate warming shelters in the midst of its homeless crisis late last year, it found the Salem Lutheran Church. Partnering with the Guardian's Foundation, Salem Lutheran has been able to take in about 60 homeless men and women every night. Pastor Liv Larson Andrews isn't just an advocate for the homeless — she's been a vocal defender of immigrants and refugees, even speaking at a protest last year about the federal government's child-separation policy in front of Rep. Cathy McMorris Rodgers' office.

INLANDER: How well have our churches done at responding to poverty and homelessness?

LARSON ANDREWS: It's mixed. I regret to see a lot of churches that have seemed to wall themselves off. But I'm really heartened that — this warming center has seemed to fall in our lap. Our phone has been ringing off the hook, from other congregations from all across the region wanting to give donations, saying "Way to go!" saying "Where can we help?" That was cool, seeing, oh, OK, we're not alone in this.

But it's hard to look at a neighborhood like West Central. It's one of the most churched neighborhoods. There are a lot of churches. But it's still a really blighted neighborhood. And so, what's the missing piece?

What's been the biggest challenge for the warming center at Salem Lutheran?

Catching up, or coming to understand the weight of the project. Sixty to 100 people sleeping in a room every night? That's a lot. I think we've needed to quadruple the size of the dumpster. The plumbing is getting a lot more use.

We're very glad that we have been mobilized to be an emergency warming center, but know that it is only one tiny piece of addressing poverty, wealth inequity and homelessness in Spokane. I'm wanting to not lose sight of the other parts of that work or the bigger conversation.

We have an affordable housing unit around the corner from us, a project with All Saints Lutheran. We've been taking our time to discern what's coming alongside the housing piece. What else is needed in West Central? Is it a clinic? Is it an education ministry? It's probably time to pick something.

What is the biggest misconception most American Christians have about Jesus?

I think we tend to make him in our own image. [Laughs] A friend was actually trying to call out the more progressive leaders, saying "Jesus has ceased to be a voice from the outside. Now he's just the 'wokest dude at the party.'" I laughed so much. I was like, oh, I might be guilty of that. The mistake we make is when Jesus is an echo chamber for our own priorities.

In the American church, Jesus is pale skinned, speaks English and is cool with wealth. I don't see any of those things reflected in the Biblical narrative.

Have your sermons become more political since Trump's rise?

I think I'm a little more direct or frank about where I am. I strive to own where I am. We shouldn't be of one political mind. But we are about telling the truth, to each other, to the world.

I was pondering replying to a social media thread, where someone was decrying "People are so cruel about Trump." You know, you can be a child of God and a rapist and a white supremacist at the same time. But if we're only saying one of those things at any given time about a person, that's false. I affirm that Trump is a child of God. But I also believe him to be a rapist and a white supremacist. ♦