There is a strange romance to a quarantine. To be told by the Important People In Charge that there are new rules, and you must follow them, and the rules mostly involve you confining yourself to a small space and keeping to yourself — it’s all very surreal and weirdly cinematic. It’s the first five minutes of every disaster movie. Somewhere in the back of my brain there is a muted but persistent ache that insists I be aware, present, and ready to run, because in the movie, things always get worse before they get better. I know I’ll be fine. I’m the protagonist. But still, those rules are going to have to be broken by some scrappy little survivor with apocalypse-tousled hair and no armpit stubble... 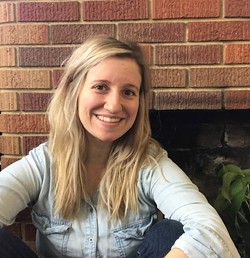 My 6-year-old explodes at my 2-year-old, using the exact same words I used on him 30 minutes ago when he was whirling a throw pillow around by its loose stitches. Just moments earlier they were playing together beautifully, using slabs of chipped granite scavenged from the garden as plates in a makeshift restaurant, but, as we are all learning, time and proximity will get you in the end.


The sun is out. After I litigate this one of many small fistfights, I lay on a blanket in the backyard feeling it warm my eyelids and think, not for the first time, that I might not mind being quarantined if I was alone...

The 2-year-old has tried to climb up the fence. He succeeded, but is stuck and screaming. Fearing that he will slip and deglove all of his little fingers, I run to help him. It’s lunchtime anyway, so we all troop indoors (“Wash your hands! Spiderman, Spiderman, does whatever a spider can…”) and I sit them down for a nutritious meal of whatever they did not finish at their last snack plus canned chicken noodle soup. The 6-year-old comes to the table dressed in various effects from the dress-up bin, looking so alarmingly like a plague doctor that I cannot even manage a “you are so creative!”

When I was 10, I had a copy of My Side of the Mountain that I carried with me everywhere, slipped into my backpack, tucked between the gummy seat cushions of my mom’s 1988 Ford Econoline, just in case I found myself lost in the woods and needed a survival guide. I recently reread it as an adult and had exactly no new take on it. I still identify with Sam Gribley, dreamy and secretive and stuck in a house with too many people in it, and I still found the ending just as jarring and awful, the way all adult decisions that come crashing down around children’s plans are. The only difference is now I am the adult, and lately my days seem to be filled with the mundane plan-ruining work of parenthood: feeding my children the cereal they’re bored of before opening a new box, asking them to do horrible, unfair labor like “brush your teeth” or “stop licking that,” and clipping fingernails, fingernails, fingernails.

If things got bad, really bad, maybe we would go hide in the woods, I’ve thought briefly, romantically, and in that way that only a middle-class white woman who has never experienced housing insecurity might think. It’s the same thought that sends us camping 40 minutes outside of reliable cell service, laden with REI gear: homelessness! What a lark!

Later, the 6-year-old tells me that tonight we’re celebrating Star Day, a made-up holiday that demands ice cream on the front steps while you watch the sunset. He tells me that if I let him stay up really late, we would be able to see millions of stars, and it occurs to me that he thinks that’s what we see, from our home in the middle of the city. He thinks that spotting the Big Dipper now and then, when we think of it, is seeing the stars.

If we did go live in the woods, that first night would blow him away. After he ate the acorn flour pancakes I made without complaint, after we had let the fire die down to a hot glow in the sand, and after his little brother had fallen asleep dense and warm on my lap, we would all look up at the sky together. My husband is behind me, our backs leaning against each other’s so we’re each resting equally, and the sky is more star than not, a brilliant and disorienting scatter of something against nothing. And the 6-year-old is stunned into silence. ♦

Maureen Haeger is the host of Weekend Edition on Spokane Public Radio. She grew up in Spokane and is a graduate student at EWU’s school of mental health counseling.