What song should Weird Al cover next?

I think he should turn himself into a TikTok star and just do seven-second parodies.

Do you think most people on TikTok know who Weird Al is?

I think so? But wait, the song [playing] above us changed my mind. I think he should cover Ke$ha. I know it's about 10 years too late, but Ke$ha lives forever.

Probably something Post Malone. The sad song that Post Malone sings, but he makes it happy. What's it called? Oh, "I Fall Apart"!

Would he keep the friendship theme?

Yeah, but just make it funny, like goofy and silly and dirty.

I gotta think of a good country one. Like, "Friends in Low Places" by Garth Brooks. Because it's a song everybody knows even if you don't know country. 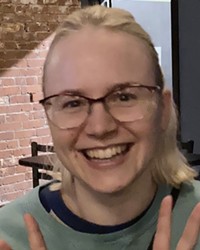 Our dad went to college with Weird Al. He's actually on one of his first songs. So it's not released on an album or anything but if you look it up on YouTube — "Baby Likes Burping" — my dad is the burping!

Can you think of any song you'd like Weird Al to feature your father on?

Time and again, public partnerships have transformed Spokane: Why are they so difficult?