Annie's lead will make you say, 'Leapin' lizards!' but it's let down by some supporting roles and soupy sound. 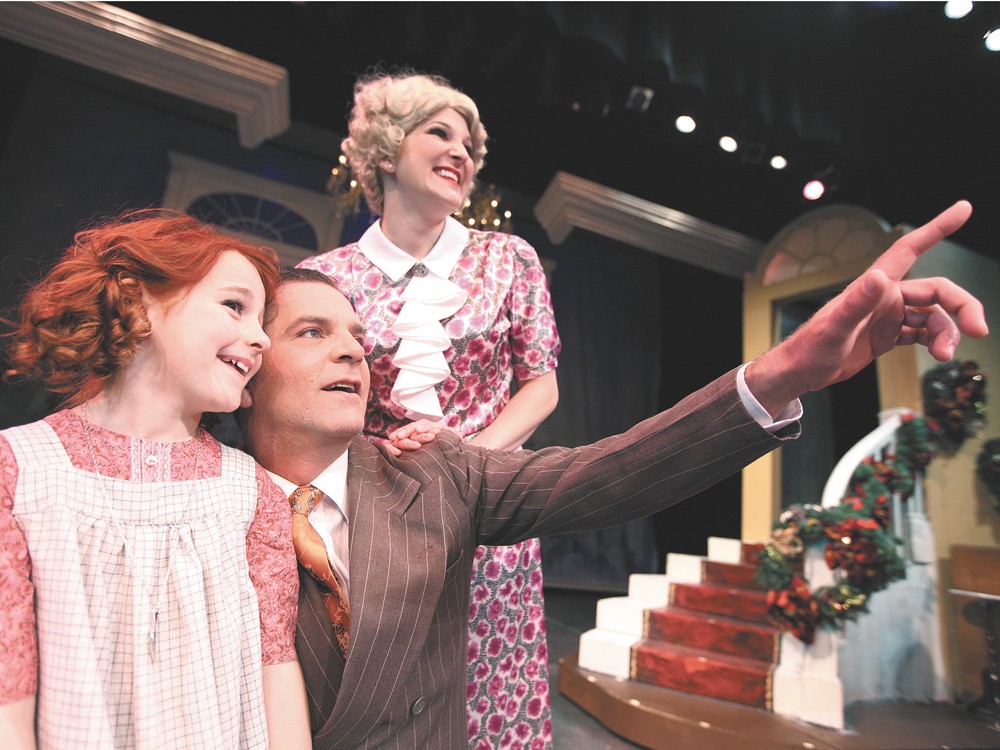 Young Kwak
Sophia Caruso (left) dazzles as Annie in the Civic\'s production of the timeless musical.

Here we are at the close of another Civic season — the community theater’s 65th. The everpopular Annie ties up what’s been self-billed as “The Triumphant Season” of 2011-12 with a thematically consistent rags-to-riches, good-trumps-evil story. It’s a fittingly high note on which to end.

If anything, though, Annie shows how little has changed over the past eight months. There’s a predictable sameness to an opening-night Civic production that makes a box of chocolate soldiers look like a mob of WTO protesters. The strengths of Annie are the same as ever. As are its shortcomings.

Among those strengths Annie can count its knockout lead. Ten-year-old Sophia Caruso is as stellar as any hype would have you believe. Her stage presence is inversely proportional to her size, and the talent that won her plaudits last year in Interplayers’ Miracle Worker, not to mention a recent shot at playing the same role on Broadway, is on full display.

Let’s face the music: “Tomorrow” is shamelessly schmaltzy. But Caruso manages to deliver it with a wide-eyed earnestness that places more emphasis on its actual message — that is, blind optimism when the chips are down — than its usual role as a vehicle for a precocious child star.

The sets in Annie are no less dazzling. Designers Peter Hardie and David Baker take us from a Hooverville to the orphanage, on to the Warbucks’ mansion to the bustling New York City entertainment district in a way that sketches the essential characteristics and contrasts of each — the poverty, the glitz, the grubbiness, the grandeur.

And the orchestra, despite a wobbly start, eventually grew to a force in its own right. But as with this season’s previous musicals, the music often swamped the dialogue. It was especially bad as Annie bantered with Warbucks’ housekeeping staff during the otherwise rousing “I Think I’m Going to Like It Here.” There’s also plenty of incidental music throughout, which would have been a nice touch if the actors’ mic volumes had been boosted accordingly.

Mark Pleasant, normally the Civic’s ace in the hole, is disappointingly miscast as Oliver Warbucks. His singing was fine, but he had none of the gruff authoritarianism that makes his character’s eventual softening into “Daddy” all the more compelling.

And since when does Warbucks sport a full head of hair?

Phedre Burney-Quimby, who was an unremarkable Miss Mona in the Best Little Whorehouse earlier this season (and the lead in the Civic’s Annie 28 years ago), is an equally unremarkable Miss Hannigan. There are so many ways to play the washed-up orphanage owner: oversexed drunk, dastardly and bitter, needy and pathetic. Burney-Quimby seemed reluctant to commit to any one of them, leaving no foil for the talented gaggle of orphans fronted by young Marlena Mizzoni as Molly.