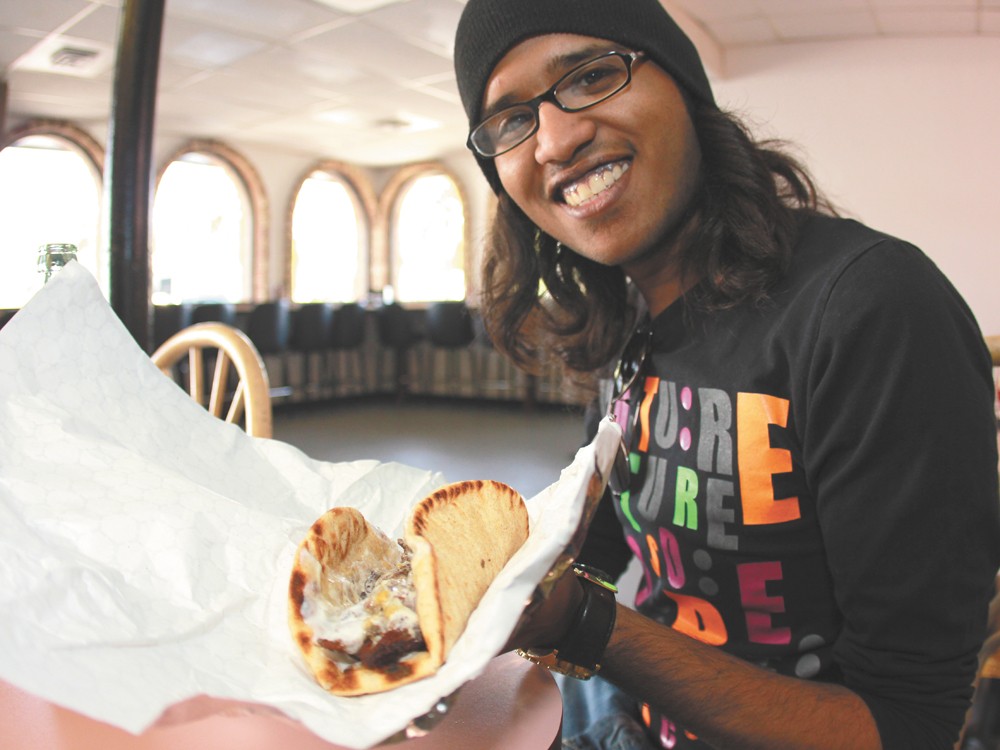 Joe Konek
Hajjer’s Kitchen opened just in time for Ramadan, which ran between July 20 and Aug. 18 this year.
On a recent warm summer evening, the sun had barely set and the employees of Hajjer’s Kitchen weren’t certain what to expect on their opening night of business. Then cars began pulling into the lot and groups of pedestrians were seen ambling down Cheney’s First Street, headed in the direction of the formerly vacant building that is currently home to the Middle Eastern restaurant.

Within minutes, Jereny Mendoza, stationed behind the counter, began taking orders for shawarma platters (juicy slices of seasoned, spit-roasted beef or chicken topped with creamy garlic sauce and served over rice), as well as orders for tabouleh salad, baba ganoush, kofta and falafel. It’s all priced at $10 or less.

Mendoza called out orders to Denzel Johnson who stood in front of roasting spits, his right hand high, clutching a pair of tongs that held a freshly grilled pita. Owner Yousef Abbulwahid was surrounded by a cloud of steam as he struggled with equipment while his wife, Crystal Contreras, carried an order to a table of hijab-clad women who seemed disappointed when she explained that the restaurant was out of rice.

Two weeks later, the restaurant boasts two fully functioning rice cookers, a well-run kitchen that turns out fresh kofta pita sandwiches within five minutes and a reputation for excellent food. Alyaa Malibari, president of EWU’s 400-member Saudi Student Association — which also includes Libyans, Iraqis, non-Muslims and others from the Middle East — describes the restaurant as a blessing for the community. And Hajjer’s food, she continues, is “very delicious, very good.”

Ramadan, which this year ran from July 20 to August 18, is a time for fasting, prayer and family. Many students not only feel the hardship of being far from family, but also living in a culture that doesn’t necessarily accommodate or appreciate the needs of those celebrating the holy month. According to Malibari, celebrating Islam’s holiest month abroad is very difficult, even if she does have members of her community here. She goes on to say that unlike her home city of Mecca, Eastern Washington is devoid of holiday lights and decorations and limited in its offerings of traditional foods with which to break the fast.

“We do this to feel how other people feel — those without food and those experiencing hardship.”

This makes Hajjer’s Kitchen a blessing during the holy month of Ramadan, when devout Muslims fast from three in the morning to when the sun goes down.

“We do this to feel how other people feel — those without food and those experiencing hardship,” Malibari explains.

During this time of bodily and spiritual purification — a way to gain closeness to God and celebrate the gift of the Koran — Muslims do not even sip water. When the sun goes down they can break their fast, but this mostly student community does not have time or energy to cook and most non-chain restaurants in Cheney do not stay open very late. Though Muslims can break their fast with any kind of food (with the exception of pork), most prefer to stick with familiar traditions during the important holy period.

This Ramadan many in Cheney’s Muslim community chose to break their fast at Hajjer’s. So many, in fact, that Contreras and Abbulwahid began referring to the evening flood of customers as the “Ramadan Rush.”

But the restaurant also bustles during daylight hours. Cheney locals, professors and some summer school students fill the stools along the counters that face outward onto First Street. A former Eastern engineering student, Abbulwahid understands the need to eat lunch quickly while studying, so he designed the restaurant’s interior to accommodate solo diners while retaining enough table seating for small groups. Many locals take large family dinner orders to go. Military personnel from Fairchild Air Force Base also filter into the restaurant to pick up falafel and the very popular kofta (ground beef and lamb) pita sandwiches.

Just as the American presence in Korea is responsible for kimchee joints around every major military installation, those returning from tours in the Middle East have developed a taste for falafel and shawarma, a phenomenon that Abbulwahid, who was born in Spokane but grew up on a military compound in Saudi Arabia, had anticipated.

“The idea for this place came from Saudi Arabia, where restaurants like this are on every corner,” he says.

Middle Eastern cuisine is the product of centuries of cultural interaction. Shish kebab can be traced back to Turkish origins. Falafal originated in Egypt but traveled north, west and east to Israel, Syria and beyond. Shawarma originated in Turkey and is now eaten throughout the Mediterranean. Malibari’s hometown of Mecca, on the Gulf Coast, features cuisine influenced by Indonesian, African and Indian flavors. One of Malibari’s favorite dishes is mandi, a spicy rice and chicken or lamb dish flavored with cloves, cardamom, ginger and other spices. She hopes that Hajjer’s Kitchen will soon feature menu items from throughout the Middle East, not simply foods found in the Mediterranean.

Abbulwahid says he’s open to suggestions — like cooking mandi — if he can work out the logistics.

“Mandi is hard. If the fire department lets me have a hole in the ground where I could cook dishes in it, I’m cool,” he says.

While Ramadan has now come to an end, Abbulwahid hopes his business continues to see the same sort of rush from an ever-expanding, and hopefully gastronomically adventurous clientele.

“Come and give it a try,” he says. “We give samples. If you don’t like it, it’s not like I’ll throw you out of the building.”