Rash Decisions: The consequences of not vaccinating can be terrible

When his mom dropped him off at Sunday school, 4-year-old David Ashlin looked like a healthy, normal child. By the time he walked down the stairs to leave, he had broken out in the red, bumpy rash of measles. Although it has been 50 years, he still remembers his mother’s terror when she saw him from the bottom of the church stairs.

Otherwise, he remembers little from the time he spent sick. “I do recall being in my parents’ room and hearing the air conditioner because I had a fever,” he says. It would be the last time he would hear anything from his right ear.

A few days after Ashlin recovered, his mother realized he couldn’t hear her when she spoke to him from the right side and that he tilted his head when he listened to people. Today, he still has to face the right direction to hear people.

“I get all the background noise, I can’t filter that out easily. It took about three years until my wife figured out what side of the table I could sit on [to hear other people],” Ashlin says.

Right now, measles infections are spreading rapidly across Washington. Four adults and one child in King, Snohomish and Pierce counties have been diagnosed with measles as of May 15, state health officer doctor Kathy Lofy says. More cases are likely.

“We do know that all five cases did spend time at the Sea-Tac Airport during their likely time of exposure and the time they were infectious,” Lofy says. “If a person develops symptoms of measles, we ask they contact their health care provider right away.”

If people think they have measles, they should contact their doctor by phone before they risk spreading the disease by visiting a clinic or hospital. Its symptoms include fever, a dry cough, tiny white spots on the inside of the cheek and a skin rash with large, flat blotches. Measles can linger in an environment for at least two hours after an infected person leaves.

“Measles is so infectious. More infectious than ebola. One person has it and that one person gives it to 16 more,” pediatrician Matthew Thompson says.

As of now, the Department of Health does not know how many people are currently infected. However, vaccines provide safe and effective protection from measles.

“The first measles vaccine you give is estimated to give you about 90-93 percent likelihood to give that person lifetime immunity,” Thompson says. “Vaccinate, and measles goes away, don’t vaccinate and it creeps back.”

When most people in a community are vaccinated, people with vulnerable or compromised immune systems who cannot be helped by vaccines are less likely to contract the disease. If some people don’t vaccinate, measles can spread with terrifying speed.

When some people in a community don’t vaccinate, they make it likely that transplant patients on immunosuppressant drugs, infants too young to be vaccinated, pregnant women, immunocompromised people and those for whom the vaccine doesn't work will be harmed by preventable diseases.

“Many people are not understanding or caring that they could put somebody else’s child in danger of ending up like me or worse,” Ashlin says.

According to school statistics from the Washington state Department of Health, 4 percent of kids K-12 across the state are in danger of measles because their parents have not vaccinated for personal or philosophical reasons. Nearly 1 percent are also in danger because they are unable to get a vaccine for medical reasons.

As of May 10, personal and philosophical exemptions have been removed by the Washington state Legislature’s House Bill 1638.

“Twenty years ago, it was a given to vaccinate your children, just as it is to make sure you use a seatbelt and the proper car seats,” Cydney Macomber, a mother who testified on the bill says. “Vaccines are a seatbelt for public health, and although they aren't perfect, they will save many more than they ever harm,”
click to enlarge 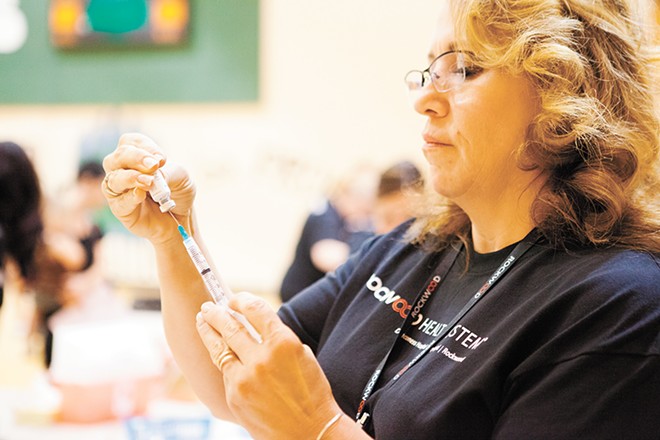 Despite these benefits, many people remain opposed to mandatory vaccines. “Choice is necessary when there is a risk,” Washington resident Tiffany Vaughan Mackie commented on an Inlander article on vaccines. “Not saying vaccines do not have value, just saying it should be up to the parents to accept the risk.”

The risks vaccines pose are negligible compared to the benefits. Allergic reactions to vaccines are relatively rare, and studies have repeatedly shown that autism is not a side effect of vaccines. Most recently, researchers in Denmark studying 600,000 children found no correlation between vaccines and autism, although autism was coordinated with having a sibling with autism, having older parents and smoking during pregnancy.

Meanwhile one person in every 1,000 who catch measles suffers complications that lead to permanent injury or death.

“I vaccinate my children,” Thompson says. “I think before the vaccine we had 4 million cases a year in the U.S.”

Ashlin has found that when he talks with people who don’t vaccinate, they don’t listen.

“The hard thing for a group that has their identity invested in not vaccinating, they don’t change easily,” he says.