Equal parts zany and conventional, Ratchet & Clank needs to get past the overdone Future series 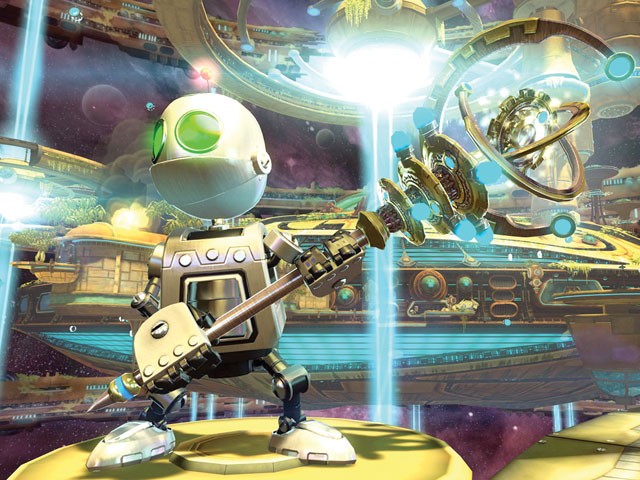 Having already exploited most of the good jokes inherent in a robotic space universe, the Ratchet & Clank franchise was forced to exploit all the bad jokes for A Crack in Time. That’s a shame. I wanted to laugh more. But A Crack in Time seems much more concerned with dramatizing the series’ storyline and unfolding the history of Ratchet & Clank’s roles in a universe that — more than ever — seems so fake as to be beyond cartoonish.

Every object in the game looks lit from within, like a backlit beer advertisement — the kind with animated waterfalls. The colors are so intense, it’s as though a giant bag of Skittles had been torn open, eaten and then another bag torn open and spilled onscreen, scattering lemon, lime, blueberry and cherry colors under the influence of a mounting sugar rush. Even the game’s obligatory dirt-colored junkyard level looks as though it were made out of caramel and nougat.

Some details are winning, such as wind whipping the hair-tips of Ratchet’s ears as he glides through space. But many of the finishing touches seem overdone and thoughtless. Foliage and debris abound, as though applied by someone furiously clicking a mouse. And Ratchet’s shadow, against all laws of physics and commonsensical computer programming, swings around on the ground beneath him every time he jumps.

A big part of the fun of R&C has always been the outlandish weapons that come prepackaged, advertised and designed, as though there really was a need in the universe for a gun that turns people into penguins, or a tornado that can be steered by remote control. But this time, Ratchet packs a fairly drab arsenal. The fanciest gizmos are a few customizable weapons that are more tedious than innovative.

Taking a cue from Mario Galaxy, small planets and moons are scattered around A Crack in Time’s universe, each with its own blend of puzzles and environments that have been done to death by Mario and Sonic. But a few of the game’s levels feature time-based puzzles that are reminiscent of that forgotten old Xbox disaster, Blinx the Cat. Apparently, those who don’t remember the past are doomed, in time, to step on the same cracks.

THE GOOD: In between the game’s mega-sized story-pushing levels, Ratchet is free to pilot himself between planets, seeking out freelance work and fighting enemy starships while listening to the radio. (A sort of rudimentary Grand Theft Auto without the gay jokes.) The interludes break up some of the game’s platform-jumping monotony, turning it into a freewheeling galactic adventure, at least for a few minutes. Then it’s back to saving the universe.

THE BAD: While the first game in the R&C Future trilogy had its fair share of room-hallway-room-hallway levels, it interspersed them with large arenas in which the over-sized aliens and equally over-sized weapons could be unleashed. This time, almost every environment feels close and cramped, even the arenas. Not quite the way to stage a game that begins with the words “Space: It’s huge.”

THE BOTTOM LINE: Equal parts zany and conventional, Ratchet & Clank needs to get past the overdone Future series and go back to its freewheeling, comedic past.