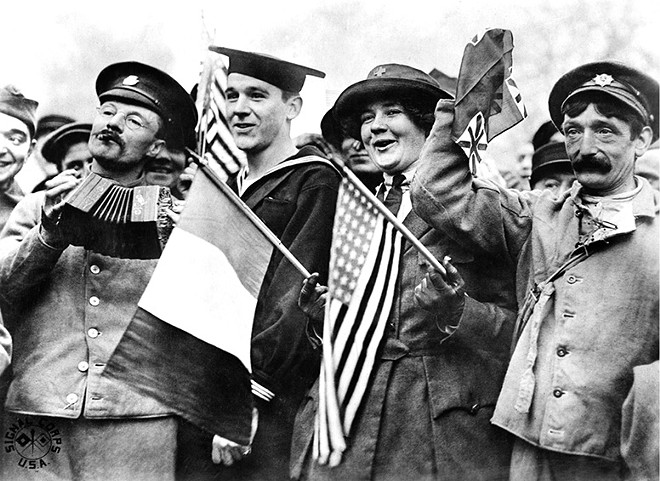 Imperial War Museum photo
A celebration after the signing of the Armistice, near the Paris Gate on Nov. 11, 1918.

RING A BELL FOR VETERANS

Reclaim Armistice Day, Spokane. Veterans Day is redundant and exploited. Americans fail to distinguish between serving and destroying. We allocate billions to kill and pennies to heal, promising the best to veterans. It's patriotism to fabricate illegal wars. It's considered welfare when the over-deployed expect care for moral wounds and broken bodies, when survivors receive death benefits. We can't honor veterans without glorifying war, even unwinnable, perpetual wars.

For 16 years the U.S. observed Armistice Day, but we didn't feel it. It didn't ring of victory. It had the clank of peace, the ping of the Kellogg-Briand Pact, the splat of the League of Nations, and the growl of unsatisfied generals. Another armistice in 1953 ended some of the deadliest combat ever, but was unsatisfying for Americans expecting victory. A year later, Veterans Day supplanted Armistice Day.

Sunday marks the 100th anniversary of the Armistice of 1918, the end of the war that should have ended all wars. Spokane Veterans for Peace invites you to commemorate the 11th Hour of the 11th Day of the 11th Month. Ring a bell 11 times with people you'd hate to lose to war.

Shalom Church and Vets for Peace will host a 10 am armistice service at 35 W. Main. Everyone is welcome.

I am a fan of Fox Corporation's sports and entertainment. I, however, object to the blatant dishonesty and manipulation appearing on Fox News. For purely monetary gain, the business that is Fox has cornered the market as a megaphone for hate, lies, authoritarianism and unprincipled hypocrisy. I am independent with no ties to any groups. Acting alone I have no power and little influence. Like many, I am frustrated that there isn't more I can do to stand against those whose actions are counter to the principles of the United States, to the teachings of spiritual leaders they profess to follow, and to any definition of exceptionalism one might attribute to people of the United States. My single vote is not enough. What more can I do?

Then, I realized, through my choice of entertainment I am supporting financially, and through ratings, the platform for these objectionable messages. By simply watching Fox offerings, I am facilitating distribution of messages I find reprehensible.

My influence is meager, but this independent, old, white, Northern European heritage male will not watch Fox again until they end their sponsoring of lies, manipulation and messages of hate, greed and authoritarianism. Join me?

Readers respond to Rep. Matt Shea's rhetoric and to a new program that releases low-risk defendants from jail

Common Ground: Our country is built on strong communities

If a tree falls in Sandpoint... it makes for a party