Readers respond to President Trump's declaration of Russian meddling in the 2020 election as a "hoax," according to the New York Times (2/21/20):

Sonya Harper: Called it a "hoax" — like the Mueller investigation, the impeachment hearing, the charges against Roger Stone, global climate change (a Chinese hoax to be more specific). ... The only hoax is the one he's perpetrated on a large swath of the American public.

Byron Ash: Every intelligence agency in the country says it's happening but Trump says it isn't so his cult members believe him lol.

Tyler Briceno: God, can everybody just be over his bullshit already?

Teresa Stewart: I don't know who to believe. All I know for sure is Trump is not the kind of person I ever want to be around. I think he is horrible. ♦ 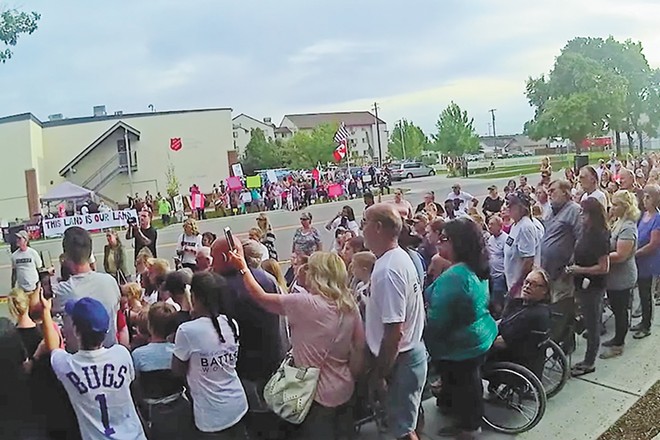 Readers respond to an article on Inlander.com about Spokane police officers' attitudes toward noise-complaint issues at a Planned Parenthood protest revealed by body cam footage (2/181/20):

Calvin Ulbricht: People seem to forget that the Constitution only allows for peaceful protest. They get carried away — it's completely ridiculous. It's one thing to protest. It's a completely different thing to make an ass of yourself like that. The message completely gets lost.

Ryan Fisher: Nobody is being stopped and it is not a hospital. People have the right to protest even if you don't agree.

Ed Guise: How come Spokane constantly monitors the sound level from local bars and shuts them down whenever it gets too loud. It's been happening for decades. When my wife calls to complain about the neighbor's loud parties, cops always show up inside of 20 minutes.

Chuck Bowers: These cops are just making excuses for not enforcing the law. Too many right-wing cops more concerned about freedom of speech for Republicans than for doctors.

Shane Mabrey: If protest was the goal, it wouldn't need to be at their front door. Disruption of services and intimidating people trying to access them is the real goal of these pro-birth people. ♦

Speaking of From Readers , Readers Respond