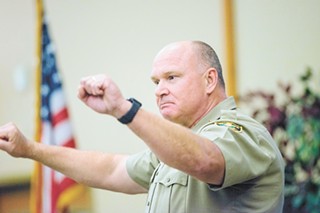 Daniel Walters photo
Ozzie Knezovich is not going to run for county sheriff again, but he says that hasn't changed him. "I'm pretty much the way I've always been."

Readers respond to an article about Spokane County Sheriff Ozzie Knezovich catching flak from both the left and the right ("The Man in the Middle," 05/14/20):

Tori Bailey: I used to like Ozzie but not so much now. He is a sheriff. His job is to enforce the laws. It is not his job to decide what is constitutional and what is not. Leave that to the judges. All these police and sheriffs need to stay in their lane. If the governors say it is so, then you carry out the orders and let the courts deal with the fallout.

Diana Bolch: I suspect the sheriff is running for a future political office. I know he has said no political office for him... but that was a while ago and now he may be having a change of heart politically... that this is a good time to run... The question is... which office is he considering?

Tyson LR: The fact that he refuses to enforce any consequences for refusing to use social distancing is exactly why we aren't allowed to reopen. That people are standing shoulder to shoulder at protests and grocery stores and he said he won't do anything about it is why we're locked down. Inslee was asking people to socially distance for weeks before he issued any orders. We wouldn't. Enforce the distancing and people will be able to get on with our lives. Do your job, Ozzie.

JD Leighty: "I thought what he did was fairly foolish," Knezovich says of [Bonner County Sheriff Daryl] Wheeler. Knezovich sees Wheeler for what Wheeler truly is, a fool. Wheeler is a clown that the citizens of Bonner County love to worship as their John Wayne. Hell, half of them moved to Bonner County just so they could play cowboy.

Diosdadiz Olmo: Playing both sides. Yep, he will be a politician after he retires.

Trevor Bradley: Honestly every time I read Ozzie's statements I think about how metered and reasonable his positions are relative to neighboring counties' sheriffs. I may disagree with him about the necessity of certain measures of the stay-at-home order, but he is out there defending its constitutionality, educating the public, and fighting against the spread of divisive conspiracy theories. Even where we disagree, his concern is for the economic impact on the working poor — which I will admit our government seems unequipped to handle adequately. All this coupled with his outspoken opposition to white supremacists in the region, I am legitimately sad to see him not seek reelection. I'm afraid to see who might replace him. ♦

Speaking of Readers Respond , From Readers