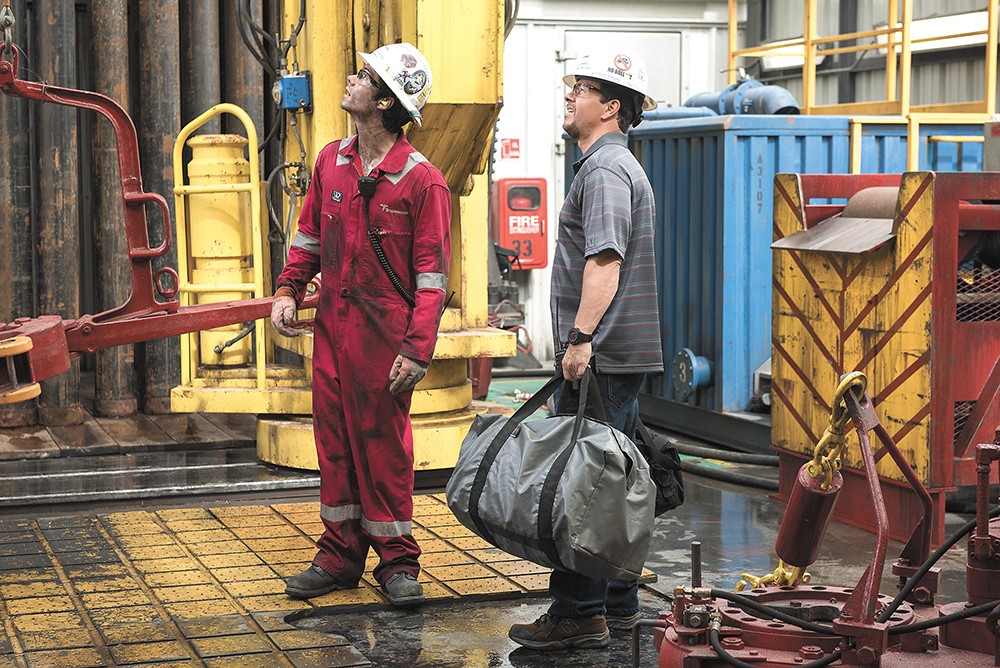 Mark Wahlberg (right) has a sinking feeling in Deepwater Horizon.

The disaster movie is a particularly curious beast

in the always-curious history of movie genres. Like action movies, they're built around the kind of spectacle that seems to demand a big-screen experience. Like horror movies, they express a cathartic need to confront terrifying scenarios in a safe space. And like melodrama of all kinds, they're about emotions writ large — love and hate, life and death — with little space for nuance or subtlety.

But one of the most fundamental requirements doesn't usually need to be expressed: They're not about real people.

Director Peter Berg smacks face-first into that rule in Deepwater Horizon, which deals with the April 2010 events on the offshore oil-drilling rig that made national headlines. The focal point of the story is Mike Williams (Mark Wahlberg), an electronics technician who is just starting a 21-day stint aboard the rig when trouble begins. The site's supervisor, "Mr. Jimmy" Harrell (Kurt Russell), questions the way that BP executives have taken shortcuts around safety tests as the creation of the well runs over budget and behind schedule. Even after additional tests suggest the possibility of unsafe pressure building below the surface, operations continue — until a massive eruption of oil and gas leads to an explosion that threatens the lives of everyone on board.

Berg, along with screenwriters Matthew Michael Carnahan and Matthew Sand, demonstrate an impressive willingness to drop viewers into the world of the Deepwater Horizon without much hand-holding orientation. The dialogue is heavy with jargon and technical terminology, addressing matters like the heavy mud used to keep oil from backflowing through the drill pipe, the various safety tests that were (or, tragically, weren't) run, systems that were failing, and the individual entities responsible for different roles. While there are occasions when a specific line might not be immediately decipherable — or even audible above the din of activity, whether everyday or catastrophic — the overall sense of the place becomes instantly apparent: This is a remarkably complicated piece of machinery, requiring a huge amount of careful inspection and maintenance, some of which it was not receiving.

The problem is that structurally, Deepwater Horizon's script doesn't resemble a harrowing fact-based story like Berg and Wahlberg's previous collaboration, Lone Survivor, as much as it resembles something like The Towering Inferno in its reliance on disaster-movie tropes. Because such tales require a bureaucratic type whose dithering and/or callousness interferes with the people raising legitimate concerns, we get a group of BP executives — represented by John Malkovich, talking about the corporation's interests in a Cajun purr that adds to the villainy — thwarting Mr. Jimmy's efforts to do the right thing. To make sure there's something at stake as the characters fight for their lives, we get a backstory about Williams' wife back home (Kate Hudson), who can worry and make anguished phone calls as news of the explosion begins to leak out. And there's plenty of foreshadowing, from the bubbles Berg constantly shows ominously erupting from the ocean floor around the well, to the school presentation by Williams' daughter about his work that sends cola blasting through a straw.

Yet as much as Deepwater Horizon keeps preparing audiences for a Roland Emmerich-style disaster yarn, this is the story of an actual disaster, which cost 11 people their lives. Berg can bring a gritty physicality to his action sequences, as he did in Lone Survivor and The Kingdom, and here he creates several squirm-inducing moments showing the damage bodies took in this tragedy. It just becomes hard to negotiate the collision between real-world facts and genre conventions. Any cheering for the applause-moment heroism is blunted by the nonfiction roots.

The weird part is that, on some level, it's obvious that Berg understands this tension. For most of the final hour, which deals almost entirely with rescue efforts and the crew's attempts to escape to lifeboats, Deepwater Horizon abandons almost all extraneous details, resulting in a climax that feels like an endurance test not just for the survivors, but for the audience. The denouement makes it clear that those survivors face the kind of traumatic aftermath we rarely see in conventional disaster epics. For all its intensity, Deepwater Horizon seems uncertain when it's permissible to be entertainment. ♦

Deepwater Horizon is not showing in any theaters in the area.