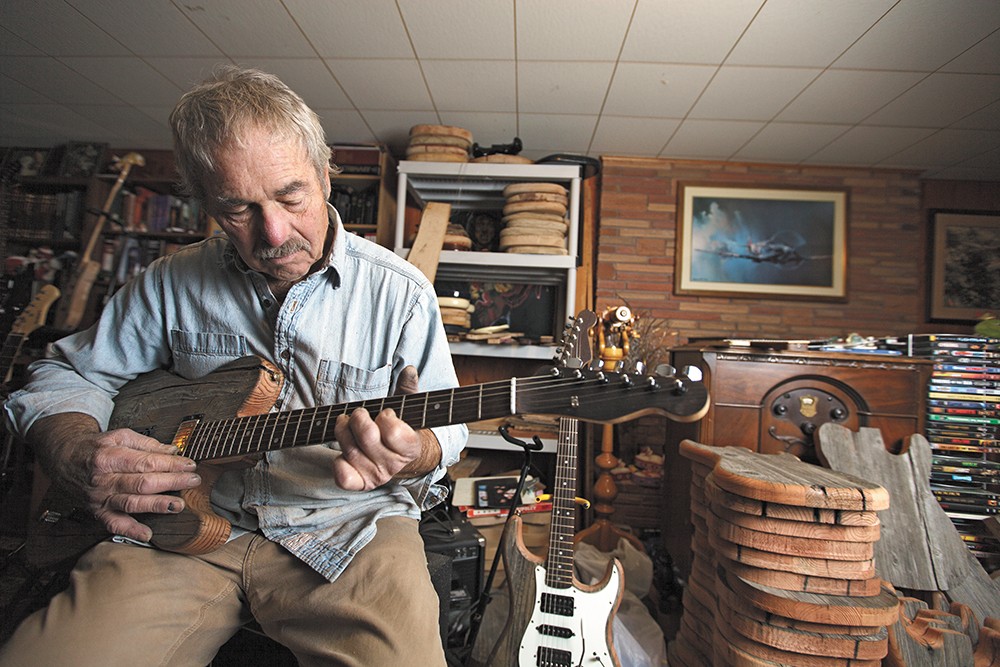 Young Kwak
Lynn Ellsworth once sold guitars to the stars. Now he has other priorities.

If that piece of wood hadn't crashed onto his hardwood living room floor, he never would have heard it.

Earlier this year, Lynn Ellsworth had salvaged some firewood from an acquaintance — scraps from an old dock, he was told. One chilly evening, he was feeding the flames in his fireplace when a board slipped from his grip.

"It rang out like nothing I'd ever heard, and I thought it would make the most amazing guitar sound," says Ellsworth, sitting in the Spokane Valley house where the discovery was made. "It was meant to be."

And so the great experiment began. He got out all of his old guitar-making molds and patterns and got to work with what he would soon classify, as he cut into it, as redwood — 3,000-year-old redwood.

"Can you believe I was using it for scraps?" the 70-year-old asks.

It felt right to use his power tools again, to work in his basement among his old guitars, creating something he wasn't sure would end well. Hollowing inner chambers in the appropriate places, he bonded the front and back of the body together, then attached a neck from a cheap pawnshop find — "I can't make a neck for $50," he says. Once strung, about eight weeks later, he played the few licks he knows from memory and was astounded.

"It's all about the sound from the body," he says. "These guitars beat anything. They'll eat those 1950s guitars for lunch. These are the best I've made."

Ellsworth has made electric-guitar bodies and necks for decades. His business, Boogie Bodies, was highly regarded. He sold pieces to Eddie Van Halen, Eric Clapton and many other stars. That was back in the 1970s and '80s, when he lived in Palm Springs, Calif., and later Seattle, traveling often for his day job in cancer research. The first guitar body he made was a copy of a Fender for an old bandmate. From there he was hooked, always trying to find the finest quality wood to generate the best sound possible.

In those days, he got around in a hearse, his Boogie Bodies logo painted on the side.

"The security guards at the Paramount Theater in Seattle got to know me really well. They'd let me park where I wanted," Ellsworth remembers. "You don't forget the guy who comes to shows with the hearse."

The secret to getting in behind the scenes: "Never ask for the main guy — they'll just turn you away if you do," Ellsworth says. "Instead, ask for the guitar tech."

When he showed Clapton's guitar tech one of his instruments, the guy played a bit and said, "I think Eric's going to poop his pants."

After trying his hand at the business full-time for three years, it didn't prove lucrative enough to keep going. He chose to retire in Spokane because he thought it was the most beautiful place he visited during his years of traveling.

Ellsworth sits next to his wife Diane, strumming the strings of one of his reclaimed guitars, completely unplugged. The instrument resonates almost as well as an acoustic guitar. His eyes sparkle as he shows off the harmonics that seemingly ring forever. The gray body isn't traditionally beautiful to look at, though. The material is perfect for docks because it doesn't rot, but after decades of battling the elements the redwood is quite weathered.

"Not one of these looks the same," Ellsworth says. "Some even have nails embedded in them from long ago."

These days he's not interested in anyone famous playing his instruments; those musicians are all mostly sponsored by Fender or Gibson, he says.

"Just the local guys, that's who I want to play them," Ellsworth says. "These guitars are made to be played by people who are going to have a heck of a fun time playing them." ♦