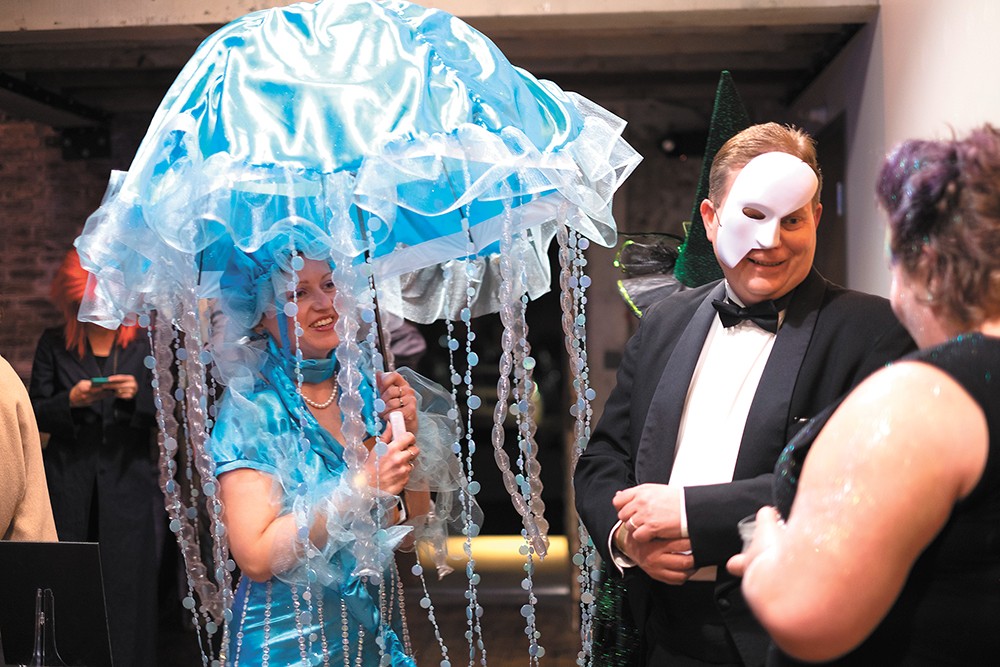 Hector Aizon
Many Spokane Arts Awards attendees, like Kitty Klitzke (left), went all out on their costumes.

Spokane Arts — Spokane's nonprofit cultural advocacy organization, funded partially by the city — did some looking forward, while also taking the time to acknowledge those who've done great things for creativity in Spokane.

At the annual Spokane Arts Awards, a costume ball featuring the sort of creative outfits that make you feel silly for just slapping on your kid's Chewbacca mask and calling it good, the organization announced its new executive director in Melissa Huggins, who previously oversaw Eastern Washington University's Get Lit! literary festival. Spokane Arts says that that Huggins will soon begin transitioning into the position, left vacant by Laura Becker, who took a job in public art for the city of Santa Monica, California.

Then, Spokane Arts dished out the awards, the first of which — the Karen Mobley Arts Impact Award — went to Steve Gibbs, who runs the Art Spirit Gallery in Coeur d'Alene and was recently diagnosed with ALS. Gibbs wrote a letter of thanks which was read by the event's emcee, and was greeted with a standing ovation for his years spent bringing the work of local artists in both North Idaho and Spokane into the spotlight.

Taking home the award for Leadership was Mark Anderson, a local poet who founded the Broken Mic series and is active in a number of local arts efforts. The Collaboration prize went to Brooke Matson, a writer and teacher who is also the executive director of the Spark Central creative space in Kendall Yards. Michael Smith, the longtime former manager of the Bing Crosby Theater, was awarded the Inclusion prize, while the Imagination award went to visual artist Chris Bolduc.