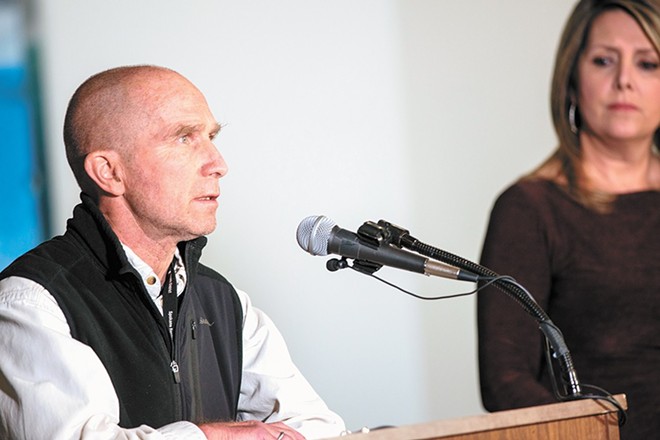 Public records obtained by the Inlander show that Spokane Regional Health District Administrative Officer Amelia Clark drafted early versions of a statement that was ultimately released by the SRHD Board of Health to defend Clark.

The drafts were drawn up in response to an Inlander story that clarified one of the biggest questions that has remained over the ousting of former Health Officer Dr. Bob Lutz: Did Clark fire him on Oct. 29, 2020, without the required board approval ahead of time, or did she tell him to resign and put him on paid leave as she later claimed and has maintained?

In late July, we reported that an email from board attorney Michelle Fossum to the health board members confirmed the first scenario. The email was sent at 5:40 pm Oct. 29 stating, "Please be advised that Amelia has terminated Dr. Lutz's employment."

Despite their own attorney's words in that email, the board doubled down after our report, insisting that Clark did not improperly fire Lutz. The majority of the board voted on Aug. 4 to draft a statement responding to the Inlander story, which they released Aug. 6 to argue there'd been no wrongdoing.

SRHD spokeswoman Kelli Hawkins clarifies that the documents, including one titled "20210803 BoH Statement" were actually notes from a meeting with Spokane County Commissioner Mary Kuney, the chair of the local health board, to prepare her for a board discussion about responding to our coverage.

"But they didn’t determine what the BOH would say in their statement and we didn’t have the expectation that our notes would be included," Hawkins tells the Inlander via email. "The final statement was entirely up to the BOH."

Both draft statements the Inlander has obtained so far stop just short of calling the media liars. 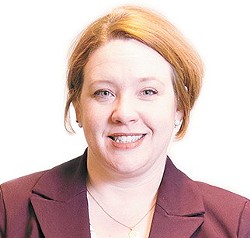 A version Clark created just before 1:30 pm on Aug. 3 states, in part: "The press and some members of the public have continued to ignore the facts as actually occurred."

A draft from later that day adds on to that, saying, "BOH Chair Mary Kuney explained that the press and some members of the public have continued to ignore the facts as actually occurred."

Both drafts similarly question how the Inlander obtained the Fossum email and note that until it was published, the board and SRHD staff couldn't talk about its contents or what had occurred in executive session.

The Aug. 3 draft statements outline a shorter version of the play-by-play included in the board's official statement.

"This unprecedented waiver is being taken to clarify that Amelia Clark did nothing wrong, despite some confusion following the meeting between Dr. Lutz, Ben Wick, and Amelia Clark when Dr. Lutz was offered the opportunity to resign," the Aug. 3 drafts state. "They were the only people present at the meeting with Dr. Lutz. No one else can properly say what occurred at that meeting."

State law requires that a public meeting and vote of the local health board be held before a health officer may be fired.  A local board vote to oust Lutz did ultimately happen a week after Lutz's meeting with Clark.

But Clark announced publicly on Oct. 30 that Lutz was no longer the health officer. In the days after that announcement, but before the SRHD board meeting to fire Lutz, citizens filed complaints with the state Board of Health asking them to investigate Clark's actions.

Since the public outcry, Clark has maintained that she actually asked Lutz to resign and placed him on paid administrative leave pending the legally required board meeting. However, the state board's preliminary investigation found that Lutz wasn't placed on paid leave until days after that Oct. 29 meeting, after public attention highlighted that firing him without a board vote was illegal.

Our July report offered further confirmation that the language "terminated" was used on Oct. 29.

The drafts also suggested Fossum would be releasing a statement of her own the same day as the board, but that did not happen.

None of the statements dispute that Fossum said Clark terminated Lutz that day.

As for that line about ignoring the facts, the board's final statement —which itself contained enough misleading elements KREM wrote an entire fact-check on it — didn't so directly point fingers: "The Spokane Regional Board of Health (BOH) does not agree with statements made by various individuals who have alleged Administrative Officer Dr. Amelia Clark terminated Dr. Bob Lutz in violation of Washington State law."

Like the final statement, the drafts also noted no more board statements will be made until Clark's hearing before the state Board of Health happens.

That matter will go in front of an administrative law judge from Jan. 18 to Jan. 21, 2022, pending confirmation from all the parties. The public will not be able to listen to those proceedings live.

Here are the two full drafts from Aug. 3 that were included in emails. 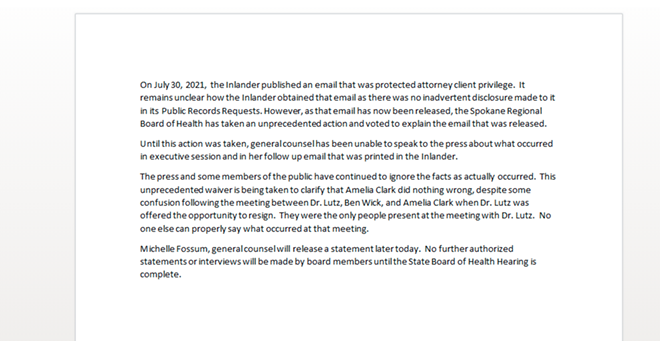