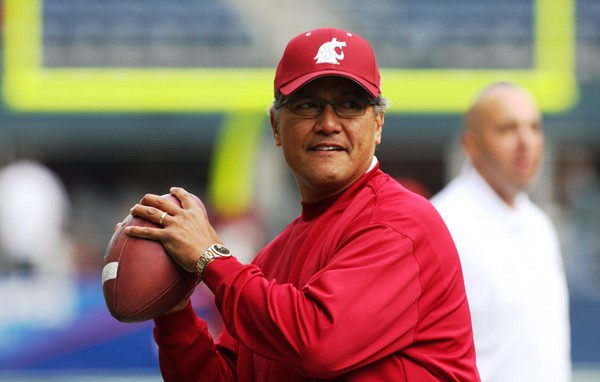 Former quarterback and WSU legend Jack Thompson, however, admonished those who reported concerns, according to records of the investigation obtained by the Inlander. He urged members of the athletic department and Cougar Athletic Fund to "fall in line," adding that it was Thompson's position to prevent the allegations from reaching WSU President Kirk Schulz, records show.

And Matt Almond, general manager at WSU IMG, which broadcasts Cougar games, said he was told to "stay in my lane" by Thompson after reporting concerns about Gesser to his supervisor, records show.

"Jack Thompson told me to stay in my lane, and his job is to keep this from getting to the president's desk," Almond told WSU investigators, records show.

WSU's Office for Equal Opportunity opened an investigation into on Jan. 2 of this year, a month after Schulz was apparently first told of concerns with Gesser's behavior.  Those concerns included allegations that Gesser had a sexual relationship with one of his interns in 2017, that he sexually harassed another intern, and that he tried to kiss a co-worker.

The OEO investigation found no policy violations and referred the investigation to Human Resource Services. Records of the HRS investigation have not yet become available. Gesser denied allegations that he had inappropriate sexual relationships with either interns or staff.

The Inlander attempted to reach Thompson on Friday regarding the Gesser investigation but has not heard back.

The investigation records, first reported on by the student newspaper, the Daily Evergreen, reveal a slew of rumors relating to inappropriate relationships involving Gesser. Investigators talked to a former WSU employee who worked with Gesser and said he tried to kiss her in a parking lot after a donor dinner. The woman, who the Inlander is not identifying, told investigators that it was not wanted, "but I didn't feel assaulted or harassed." Gesser also allegedly sent the former employee text messages that were "suggestive" in nature, including while at work. One message invited her to his hotel room while the two were out of town for a golf tournament, records state.

The university investigated "flirty" text messages allegedly sent to a student intern, but she told investigators those took place after she had graduated from WSU. Rumors also circulated that Gesser had a sexual relationship with an intern in 2017, though the intern denies any relationship took place, records show.

But that rumor — of an affair with an intern who "directly reported" to Gesser — was the "red flag" that made all the other "yellow flags" fall in place in regards to Gesser, said Uri Farkas, the former director of the Cougar Athletic Fund at WSU. It was reported to deputy athletic director Mike Marlow, to President Schulz on Dec. 1. 2017, and to then-interim athletic director John Johnson on Dec. 7. (A new AD has since been hired.)

Somehow, Farkas said, Thompson found out about the situation. Thompson then allegedly talked to Marlow, and indicated "we needed to 'fall in line' and it was his position to protect the president from these things reaching him and in situations like this, he 'calls his friends,'" records state. This conversation happened shortly after Schulz was notified in early December, Farkas said.

Marlow told investigators that Thompson was a "personal friend" of both his and Gesser's. He played down Thompson's remarks of wanting people to "fall in line."

"Fall in line might be a little strong, [Thompson] wanted people to work well together," Marlow told investigators.

Neither Farkas, Marlow, nor the woman who Gesser allegedly tried to kiss work for WSU anymore. Marlow accepted a job at Northern Arizona University days after Schulz and Johnson were first notified of the allegations against Gesser. Farkas joined Marlow at NAU a month later.

Schulz appointed Thompson as a member of the search committee to pick the new athletic director when former AD Bill Moos left last year.  In summer 2017, Schulz and Thompson went on a "goodwill" trip to American Samoa. Other WSU employees described to investigators a strong relationship that Schulz has with Thompson.


When asked to respond to the allegations that Thompson tried to silence allegations about Gesser, WSU spokesman Phil Weiler says, "I don't know anything about this claim."

Kristine Schroeder, vice president of human resources for IMG College, told investigators in January that IMG was reviewing Gesser's contract as a color analyst for football games. She added that the reason for potentially not renewing the contract was "things we have heard about — off-air interpersonal interactions." Ultimately, his contract was not renewed.

Almond, with IMG, has not responded to an Inlander message seeking comment. But he told investigators that shortly after he reported what he'd heard about Gesser to his superiors, interim AD Johnson called him in for a "status update," records say. Johnson — who is now the senior associate director of athletics — told Almond that donors were calling in "frustrated" with Almond for reporting what he did about Gesser.

"He warned me to be careful," Almond said. "He said it is difficult to predict how these situations are handled."