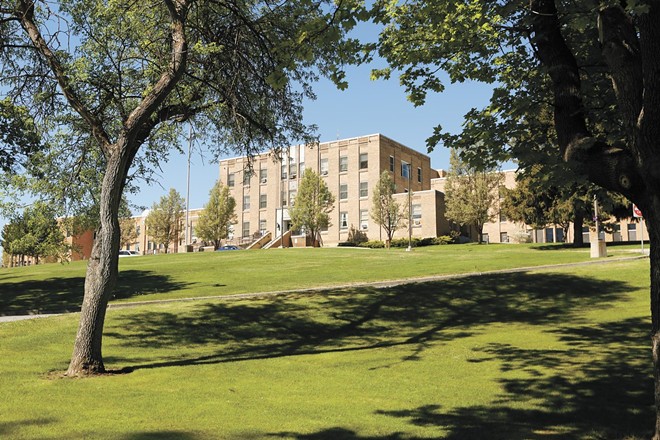 Young Kwak photo
A nurse at Eastern State Hospital was convicted of abusing one co-worker he dated before allegedly murdering another.

The Aug. 3, 2019, email from a lower-level supervisor said that Phillips had been jailed for attempting to strangle a different co-worker he was dating at the time. The email said that the co-worker, whom the Inlander will identify by her first name, Jennifer, "remains fearful of retaliation from Josh Phillips."

Skehan's short reply thanked the supervisor and told her to "follow up with HR as we should alert security," records show.

But as the Inlander reported in May, Eastern State failed to conduct its own investigation into the allegations before welcoming Phillips back to work months later. Instead, in a decision approved by CEO Mark Kettner, the hospital simply put him on an alternate assignment that forced Jennifer to get shift assignments from Phillips, who she says nearly tried to kill her.


Once back at work in 2020, Phillips started dating Dewey, 35. In April of this year, he was charged with murder for allegedly stabbing Dewey to death. He also allegedly stabbed Dewey's daughter Lilly, who survived the attack.

Current and former Eastern State employees said in May that they had expressed concerns about Phillips' violence toward women before the fatal attack, and that they feel Dewey might be alive today had those warnings been taken seriously. This month, the Inlander obtained emails through a public records request revealing that top Eastern State Hospital officials like Skehan and Chief Operating Officer Ronda Kenney were explicitly notified of those concerns in writing.

When reached on the phone, Skehan directed the Inlander to Kettner and Kenney.

"They were aware of everything," Skehan says.

Kenney did not respond to a message seeking comment, and a request to speak with Kettner was denied by an Eastern State spokesperson, who said the hospital is in the process of conducting an "internal review" of the situation and cannot comment for this article. The Washington State Patrol has recently begun a "personnel investigation" into the matter.

On Aug. 1, 2019 — days after Phillips' alleged assault of Jennifer — CEO Mark Kettner signed a letter to Phillips notifying him that he'd been placed on "alternate assignment."

The letter did not explain why. And while it specified that Phillips could not have any unsupervised access to patients, it did not say anything about contact with Jennifer, who had an active restraining order against him.

When Phillips actually came back to work — months later — he gave shift assignments to Jennifer, with the restraining order still active. Eventually, Jennifer agreed to a plea deal reducing the charges from felony assault to misdemeanor domestic violence, malicious mischief and disorderly conduct.

On July 10, 2020, a nursing director named Shelli Huey sent an email to Skehan and Kenney containing the plea deal with Phillips' conviction, along with the original assault charge. Huey wrote that "a concerned staff member" brought the information forward.

"This staff is concerned for [Jennifer's] safety — he is still coming to her house, dropping things off etc.," Huey wrote. She added that the staff member thought Phillips shouldn't work there anymore because Jennifer "would have died" if someone hadn't stopped him from strangling her a year earlier.


The records provided to the Inlander do not show Kenney or Skehan responding to any of these concerns from women working at Eastern State.

Skehan would not comment on whether there was in fact a response, but she reiterated that everything would have gone through Kenney, the COO.

"We really do take things seriously. There was always a conversation or an email," Skehan says. "That was always our process."

A later email from Huey describes how "female employees" had "expressed concern over their safety, as this report about him and Jennifer is public knowledge and it is very likely they saw this along with photos that support his abusive treatment of women."

Kenney was copied on that email as well.

DSHS has previously said that no internal investigation was done regarding Phillips' abuse of Jennifer, despite the conviction. DSHS policy states that any employee arrested, charged or convicted of domestic violence can be subject to disciplinary action, up to and including dismissal.


Jennifer, meanwhile, left town in the summer of 2020 to escape Phillips, fearing for her life.

And by that point, Phillips had started seeing Dewey, a mental health technician at the hospital.
Skehan maintains that the hospital did not dismiss the concerns about Phillips. "We're devastated too," Skehan says. "It's a tragedy for everybody."

TOO LITTLE, TOO LATE

In September 2020, Phillips complained to Huey and Skehan that he was being bullied by women who were close to Jennifer. He told Skehan that there were "rumors" out there and that he would hope Skehan would not listen to them, emails show.

Skehan, well aware of Phillips' arrest and misdemeanor conviction, told him she "would not nor have I ever listened to rumors," before she "assured him I wouldn't now either," emails show. She emailed Kettner, the CEO, and Kenney about Phillips' complaints of bullying. She added that she knew "Jennifer is leaving" but that she hadn't shared that with Phillips.

Nothing came of Phillips' complaints. Eventually, months later, human resources did conduct a full investigation of Phillips — but not over the allegations of abuse. It was because of "ongoing attendance issues." As a result, in January of this year, Phillips was given an oral reprimand, records show.

Those close to Dewey also had concerns about Phillips. Her ex-husband wrote in a court declaration in October 2020 that he did "not feel safe with my kids being in Kassie's home when he is there." Other employees at Eastern State who knew Jennifer warned Dewey about Phillips, co-workers have told the Inlander.

Phillips was put in Spokane County Jail, where he remains, on $1.5 million bail.

On May 7, Phillips received a letter in jail from Eastern State Hospital, court records show.