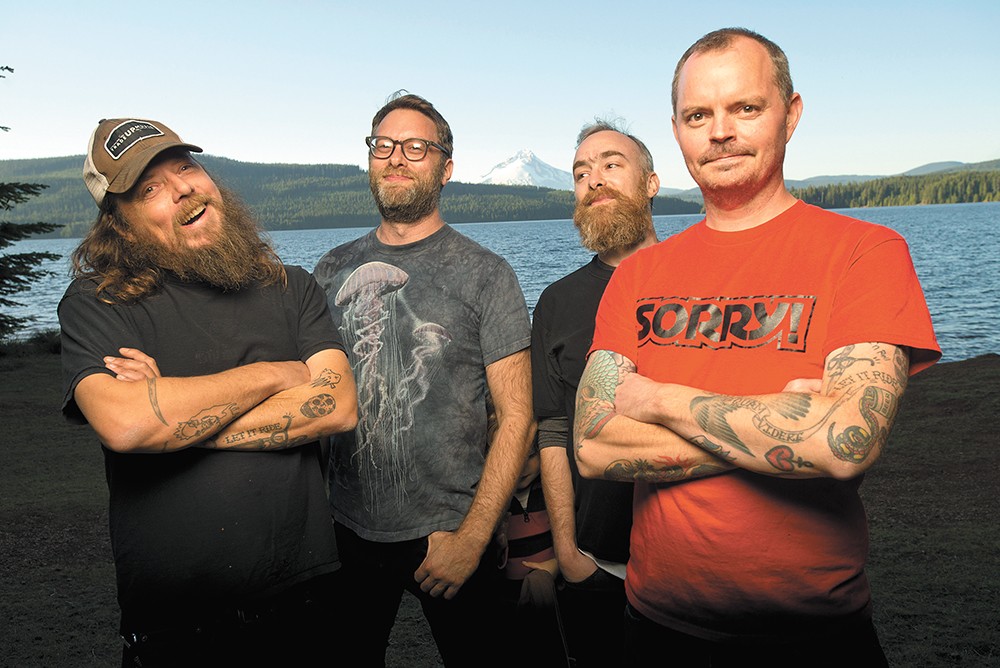 Stoner rock doesn't get much goofier (or oftentimes grosser) than Red Fang.

Bryan Giles likes to have two complementary guitar riffs before showing an idea to his bandmates in the Portland-based hard-rock band Red Fang, because a standalone riff isn't all that useful for writing a song.

"Some of the best riffs we've written are still sort of languishing in the practice space because they don't have a direction," he says. "It's like, 'God, that riff's great, but nothing works with it.' If it's going to be that problematic, it's sort of heartbreaking."

Imagining the discarded riffs on file in Red Fang's studio is a guitar dork's wet dream. Across the band's four-album catalog, they've produced some of the most memorable guitar hooks in modern metal, consistently delivering crushing breakdowns with dual guitars, bass and drums interlocking as one. Whereas many of their peers get overly caught up in tones and technicality, Red Fang plays with basic dynamics to a far more powerful effect.

And in a genre populated by moody artistes, Red Fang is plain silly — Mastodon if they were any fun at all. For example, most of the world was introduced to the band by the music video for "Prehistoric Dog," which features the members shotgunning beers until they actually vomit.

Giles says he never takes himself — or Red Fang — too seriously.

"We're knuckleheads," he says. "We're just not serious dudes. I couldn't fight my way out of a paper bag, so I can't imagine putting on spikes and leather, basically armoring up and putting on some tough-guy facade. It's like OK, you're heavy metal and you have the evilest riffs, or whatever, but you're still the court jester. You're a musician. In the Middle Ages, you'd be jumping around in tights with a lute."

Red Fang's messy, beer and bongwater-soaked sound is epitomized by "Throw Up," a six-and-a-half-minute epic off their second studio album, 2011's Murder the Mountains. On top of absolutely filthy sludge-metal riffage, the lyrics about blood and rotting meat are, well, gross. Lately, the band has been closing their sets with "Throw Up," which Giles acknowledges may leave a sour taste in listeners' mouths.

"As far as the moods that we try to create with our songs, that song is particularly nasty," he says. "We've put it in the set before and found it had a sort of finality to it. It's pretty high drama, with the long, ugly riff at the end there. It makes a great set-closer, from a dramatic standpoint."

But the song isn't totally ghoulish. In fact, Giles says the original lyrics in the chorus were inspired by dreary Pacific Northwest weather: "Rain, rain, please don't go away / I need something to complain about." He decided that sentiment was too cheesy, however, and ultimately wrote about "how life sucks and you need to reject those negative elements and focus on the positive." He settled on: "It's a puzzle that we figure out / Take the hate and you spit it out."

"For as grisly as that song is, the chorus is probably one of the most positive lyrical things I've ever done," he says. "At the time, I asked the band, 'Is this too optimistic?'"

Though Red Fang is often categorized as stoner metal, Giles says that's probably misleading. They're not musicians who tend to ruminate on a single blues riff for minutes on end.

"We're more hyperactive than that," he says. "Stoner-metal, I think, is pretty literal. It's about smoking weed and tripping out. These songs kind of create this world, and you're in it, you know? ... I think if you're looking for a stoner-rock band and you pick up one of our records, you might be disappointed. We're a rock band, really — a hard rock band." ♦

The original print version of this article was headlined "Silly Riffage"