As in the rest of the country, a Republican wave washes over the Inland Northwest. 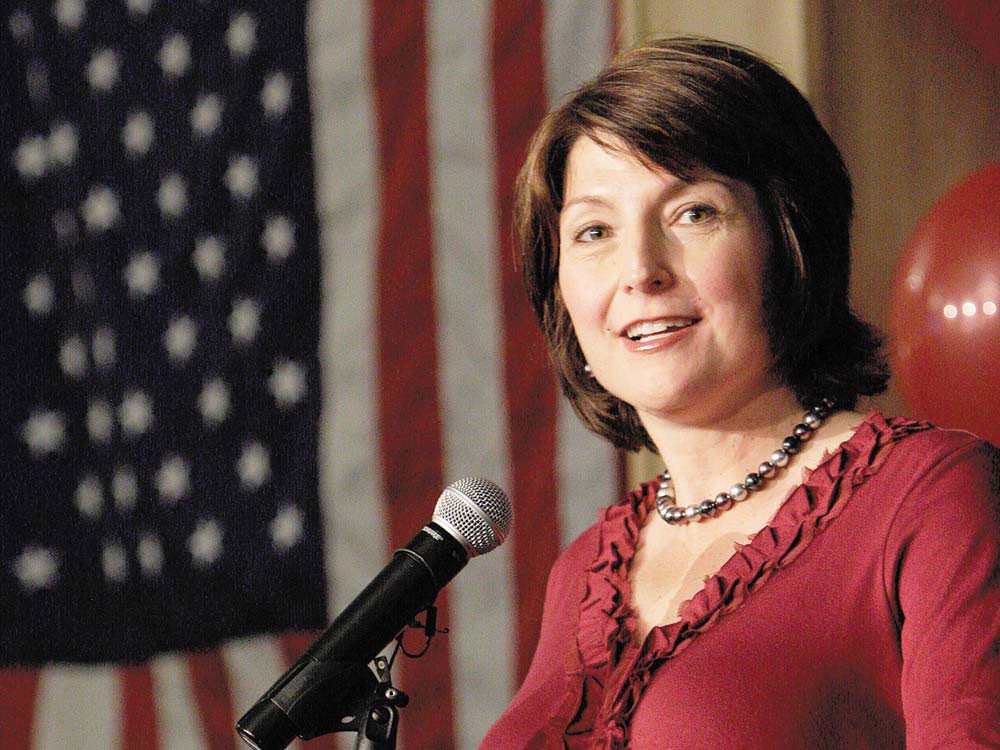 U.S. Rep. Cathy McMorris Rodgers, R-Spokane, fresh off her pummeling of former television weatherman Daryl Romeyn in the midterm elections, is once again running without opposition for a leadership post in the House of Representatives.

She is among a handful of regional Republicans to suddenly rise to prominence, the others being Doc Hastings of central Washington and Mike Simpson of Idaho.

McMorris Rodgers is seeking a second two-year term as vice-chair of the House Republican Conference.

The congresswoman’s spokesman, Todd Weiner, says McMorris Rodgers has praised the Tea Party’s role in energizing Republican voters this election while noting she is not a member of the Tea Party Caucus.

As vice-chair the last two years, McMorris Rodgers helped articulate the GOP positions on cutting government and spending. Now that the party is in the majority, “the influence of the position will increase substantially,” Weiner says.

Idaho Rep. Mike Simpson is another GOP House member on the rise. Simpson is among the cadre of the half-dozen or so “Boehner’s Boys,” longtime friends of Rep. John Boehner, the new Speaker of the House. As his reward, Simpson is in line to be the next chairman of a House Appropriations subcommittee on Interior and Related Agencies, and second in command of a subcommittee on Energy and Water Development.

These are powerful posts for an Idaho congressman, as the subcommittees determine funding for the federal agencies that control 64 percent of the state’s land area.

While he is no fan of the Environmental Protection Agency, Simpson told a Twin Falls newspaper, “I’m not one who is out to get the EPA, if you want to call it that. I’m out to make sure they do their job as Congress intended them to do.”

Hastings, too, is no fan of the EPA and has already announced new priorities for the resources committee to include greater domestic energy production on federal lands and pushing back against oil-drilling moratoriums in the Gulf and the designation of potential new national monuments. (Kevin Taylor)

Voters in the city of Spokane this year faced a ballot containing about 40 races. That’s 10 separate measures and scores of candidates to learn about. It’s no surprise, then, that many voters submitted ballots with bubbles left unfilled.

What’s interesting, though, is to look at which races — and which types of races — left the most voters either too confused, too tired or too apathetic to cast their vote. Or the reverse: For which races did voters feel so compelled to vote that they left the fewest empty bubbles?

According to data from Spokane County on Friday afternoon, of the five races that had the lowest ratio of “undervotes,” four were ballot measures. Voters in Spokane County were most fired up about Initiative 1107, which will repeal taxes on candy and soda. Only 1 percent of voters left both bubbles blank or didn’t supply a write-in. Voters were also animated by the income tax measure and the two measures privatizing the state’s liquor business. The only actual candidate race to break the top five? The U.S. Senate bout between Patty Murray and Dino Rossi.

Among the races in which voters had a choice (that is, excluding races where candidates ran unopposed), the least voted-for were judicial races — the Supreme Court contest between Charlie Wiggins and incumbent Richard Sanders (28 percent left this blank), and the district court race between Tim Note and incumbent Debra Hayes (also 28 percent).

The most voted-for races were the two congressional races (only 1.75 percent left the bubbles blank), the ballot measures (although voters seemed flummoxed by the measure on state debt and a local initiative to combat dropout rates) and state legislative contests. (Joel Smith)

Browse the results on the Spokane County Elections website, and you’ll see a throbbing cloud of red. With one exception: Spokane County Auditor Vicky Dalton, who oversees elections, financial services and motor vehicle licensing, was the only Democrat in the county to win. (At press time, the race for treasurer remained too close to call.)

So how did she do it?

“In this job, I work with campaign candidates, and both parties,” says Dalton, who was accused of mismanaging her office by her Republican challenger, Leonard Christian. “So the Republicans who have worked with me over the years know that I operate my office in a very fair, reasonable nonpartisan manner.” (Joel Smith)

During the midterm elections, Rep. Walt Minnick of Idaho’s 1st Congressional District was the Democrat who tried to avoid mentioning that he’s a Democrat. Minnick, after his loss to Raul Labrador, is not the only one of the conservative and centrist Blue Dogs to vanish.

The coalition lost 31 of its 54 members in last week’s hard right turn. It was especially grim for the four Blue Dogs in the Mountain West, where Minnick, John Salazar of Colorado and Betsy Markey of Colorado all got the heave-ho. Utah’s Jim Matheson was the lone survivor.

Idaho emerged as the reddest state in the union, outdoing other conservative bastions such as Utah and Oklahoma, according to analysis by the Oklahoman newspaper.

Not only was Minnick erased as the only blue spot in Idaho’s congressional delegation, every statewide office went Republican. The state Legislature has only 20 Democrats (13 House, seven Senate) out of 105 positions.

If you believe Vicki Horton — the employee who challenged her boss in the Spokane County Assessor race and won — her election has already made an impact. With incumbent Ralph Baker on his way out, the sense of low office morale, Horton says, has already begun to dissipate.

“The air in here is a lot lighter,” she says. “More of them are relaxed, and not stressed out as far as what’s happening next. They know me, they know my work ethic.”

As for the expensive airplane photography program that Horton spent her campaign railing against? It’s already been put on the 2011 budget before Horton was in office. The program will be in effect until at least 2012, Horton says.

“Hopefully, everyone will be a lot more calm and interested in their job,” Horton says. (Daniel Walters)

This year, Washington voters really, really hated taxes. They repealed the tax on candy and soda, reinstated the requirement for two-thirds of the Legislature to support a tax for it to pass and, by massive margins, rejected creating a new income tax for the rich.

Even “for the children” wasn’t a strong enough appeal to escape antitax sentiments. Voters rejected the renewal of bonds for school energy retrofits, and a full 65 percent refused to raise property taxes to create a fund to combat dropout rates.

“We got a mixed message, where voters were saying they liked the service the government was providing but they had some skepticism with paying for it,” says Sandeep Kaushik, spokesman for Initiative 1098, which would have taxed the wealthiest Washingtonians.

Some effects are immediately clear. Starting Dec. 1, you’ll save 8 cents on a dollar candy bar. There won’t be extra anti-dropout funds to help out Big Brothers Big Sisters. Schools hoping to save money by overhauling their obsolete heating systems won’t have bonds to do so.

But for the state, it’s complicated. The candy and soda tax repeal means an even bigger budget gap.

“If it had been in effect the entire year, [the candy tax] would have raised $100 million,” says Glenn Kuper, communications director at the state Office of Financial Management. “The passing of the initiative will mean we collected only $45 million.” It means a loss of $218 million for the next biennial budget, Kuper says.

Democratic state Senator Lisa Brown of Spokane says I-1053 — the two-thirds requirement in the Legislature to raise new taxes — has just made it harder to close loopholes. And with the big deficit, Kaushik says, the Basic Health Plan is likely at risk.

Renton’s Democratic senator, Margarita Prentice, chair of the Ways and Means Committee, says the voters get what they asked for. “The voters have made it really clear they don’t care about those who have less,” Prentice says. “I would say, ‘Please, everybody, don’t come down here asking for anything.’” (Daniel Walters)

Baumgartner: On His Way

After working for the U.S. State Department overseas, Mike Baumgartner moved back to Eastern Washington in January, won election to the state Senate last week and is now headed to Olympia by way of San Francisco. The man’s got some wanderlust.

But the Pullman native has got four long years ahead of him representing Spokane’s 6th District, and he says he knows he’s got his work cut out for him.

“Given the condition of the state budget, and the expected shortfall, it’s all-hands-on-deck time to find working solutions,” Baumgartner said Monday, while preparing for his honeymoon, a drive down the Oregon coast to the Bay Area. (He was married in the midst of the campaign to Eleanor Mayne, whom he met in Afghanistan.)

After a contentious campaign against Democratic incumbent Chris Marr, Baumgartner says he is “humbled by the fact that almost half of the people didn’t vote for me,” and that even though he and Marr took it to the mat a couple of times, he thinks the race was run well by both.

“We really took our message to the people. We had something like 20 forums. We both knocked on 20,000 doors,” he says. “If [voters] chose to not pay attention to the sound bites and commercials and flyers, they really had a good choice.” (Nicholas Deshais)