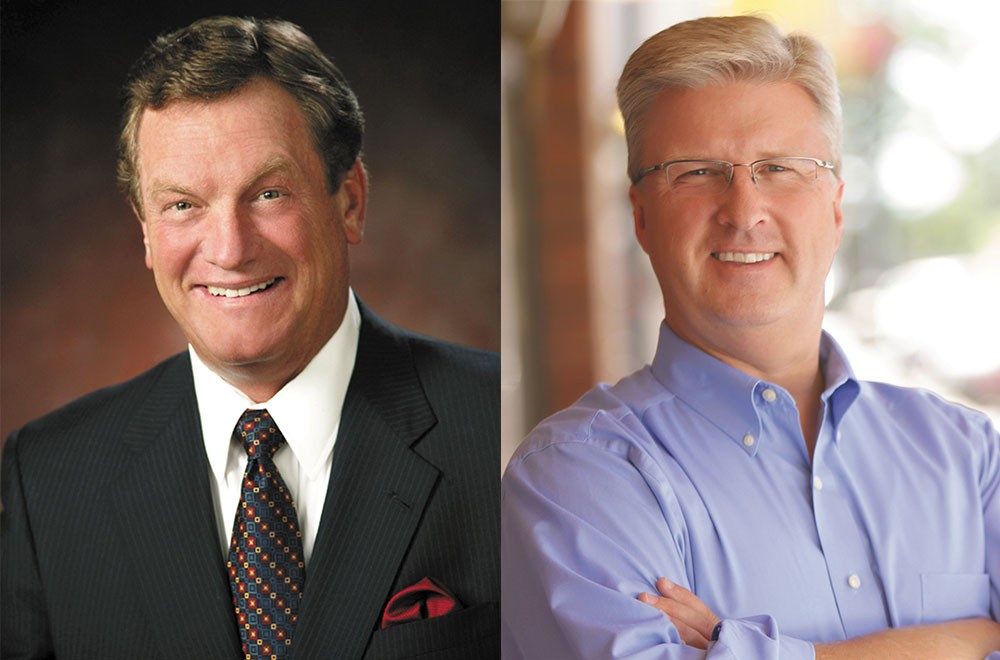 The background music comes from a children's song. "Mr. Rhino," the performer sings, acoustic guitar happily strumming along. "You got one tail, four feet, 12 toes."

This video isn't a children's TV show or a zoo commercial. It's a negative ad branding Mike Simpson, U.S. Representative for Idaho's 2nd District over the eastern half of the state, with the dreaded label RINO: Republican In Name Only.

In one of the country's most heated GOP primaries, Simpson's defense against challenger Bryan Smith comes down to the purity of his conservatism. His tag line, after all, is "Mike Simpson, Idaho Tough, Proven Conservative."

He can point to plenty of proof. National Journal's 2013 vote rankings scored Simpson as more conservative than the majority of the House — a body controlled by Republicans — in every area, and only a few points lower than Tea Party favorite Raúl Labrador, who represents Idaho's 1st District. Simpson has a perfect rating from the National Right to Life Committee, and the NRA is one of his major donors.

All of those go-nowhere Republican votes to defund or repeal the Affordable Care Act over the past four years turn out to be not so useless in a heated primary: On his website, Simpson brags that he voted against Obamacare 49 times.

But to the Club for Growth, the national anti-tax group responsible for the RINO ad, all those conservative moments can't wash away the stain of the exceptions. "We don't really concern ourselves with what other groups do or say. He's a 57 percent on our scorecard," says Club for Growth spokesman Barney Keller. "That's abysmal."

After all, Simpson voted for the initial Wall Street bailout. He voted to expand a federal health insurance program to cover more children. He defends earmarks. He said you can't just get rid of the Environmental Protection Agency. To the Club for Growth, it's obvious: Simpson isn't just moderate — he's practically liberal.

While it would be easy to reduce this race to another hard-line attempt to purge the impure, it's more than that. It's a proxy war between two strains of conservatives: Big Business on one side; Big Ideology on the other.

Red-meat red-staters have long objected to Simpson. That includes his own House colleague: After Simpson opined that Labrador had lost his credibility by refusing to vote to re-elect John Boehner as Speaker of the House last year, Labrador called Simpson a "bully" who came to Congress to "compromise." He's declined to endorse Simpson in this race.

"Previous candidates who have run against Mike Simpson had trouble putting two nickels together," Keller says. Even then, during the Tea Party wave of 2010, Simpson received only 58 percent of the vote in the primary.

Now, thanks to the Club for Growth and other outside groups, Smith has been able to mount the most serious challenge yet. They've poured nearly $500,000 into Idaho to defeat Simpson. On top of that, nearly two-thirds of the amount raised through individual donations for Smith in 2013 — more than $400,000 — was earmarked and bundled by the group.

The Club for Growth has already left a mark on national politics. In 2012, it funneled $6.5 million to help attorney Ted Cruz beat a sitting lieutenant governor in a Texas GOP Senate primary. Cruz went from a near-unknown to a Time magazine Person of the Year runner-up, a filibustering grandstander, and a catalyst for last year's government shutdown.

Not every Republican is thankful. Consider former Ohio Rep. Steve LaTourette, a self-styled arch-nemesis to groups like the Club for Growth. "They try to create a Ted Cruz printing press, and print 50 Ted Cruzes," LaTourette says. "The country doesn't need 50 Ted Cruzes."

He points to weak candidates who lost elections after the Club for Growth helped them beat more viable Republican incumbents. "We'd be the majority party today if they hadn't attacked or entered into the general election races," LaTourette says. "All the things they hate wouldn't have happened."

Behind the curtain, the Simpson-Smith race pits LaTourette's group, the Republican Main Street Partnership, against the Club for Growth.

"Mike Simpson is a very conservative Republican," LaTourette says. "But Mike Simpson also is a pragmatist. He values public land, for instance. He thinks it's not a bad thing for kids to have health care."

That matches the rest of Simpson's donation base. He still has a big financial lead, with most donations coming from political action committees. Scroll through his donor list, and see a myriad of businesses related to agricultural, mining, timber and gambling interests: Simplot, Monsanto, Potlatch, CH2M HILL and the Hecla Mining Company. Simpson is supported by the Chamber of Commerce, which runs pro-Simpson ads featuring former presidential candidate Mitt Romney — another moderate Republican associated with big business.

By contrast, Smith is unyielding in his call for low taxes, less spending and fewer regulations. He supports eliminating the Department of Education and ditching the Common Core standards. But even Smith's record isn't perfectly conservative. An Idaho Falls trial lawyer, Smith not only opposed a 2003 Idaho bill to cap lawsuit damages, he recently used Simpson's support of federal tort reform to gin up donations from his fellow attorneys.

Here, the Club for Growth is OK with imperfect. "Getting a 95 percent on our scorecard means you didn't get everything right," Keller responds. "[But we] need more 95s."

It's an underlying question — when is compromise strategic and when is it surrender? — that continues to define the race, and the larger division in the Republican Party.

"To me, that's a win, not a loss, if you get 80 percent of what you want," Simpson said at Sunday's debate. "If you're not willing to do that, you're not going to get anything done in Congress, and you'll just be howlin' at the moon."

Smith didn't buy that nuance. "I'm not a politician. I haven't been in Washington as part of the problem for 16 years," Smith concluded. "I am a true conservative, who is not afraid to stand up for us." ♦

Here are a few other highlights from the state's May 20 GOP primary:

• Russ Fulcher, one of Gov. Butch Otter's primary opponents, has been hammering Otter for not doing enough to stand up to the federal government. He's earned an unlikely duo of endorsements: Rep. Raúl Labrador and former Democratic state Rep. Branden Durst. Both praise Fulcher's conviction.

• In much of North Idaho, the story is reversed, as conservative incumbents are being threatened by more moderate groups. The North Idaho Political Action Committee is pushing five candidates to unseat North Idaho incumbents, including Coeur d'Alene Reps. Kathy Sims and Bob Nonini.

• Idaho's controversial Superintendent of Public Instruction Tom Luna decided not to run for re-election. Four Republicans are running to replace him. Only John Eynon, a teacher in the rural town of Cottonwood, has pledged to try to reverse the state's support of the beleaguered Common Core standards.

• Despite her resounding defeat in last year's Coeur d'Alene mayoral election, candidate Mary Souza hasn't taken much of a break from politics. At her Mary Souza for Idaho Senate page, an ad with a martial drumbeat plays automatically as she slams State Sen. John Goedde's support for health insurance exchanges and Common Core.