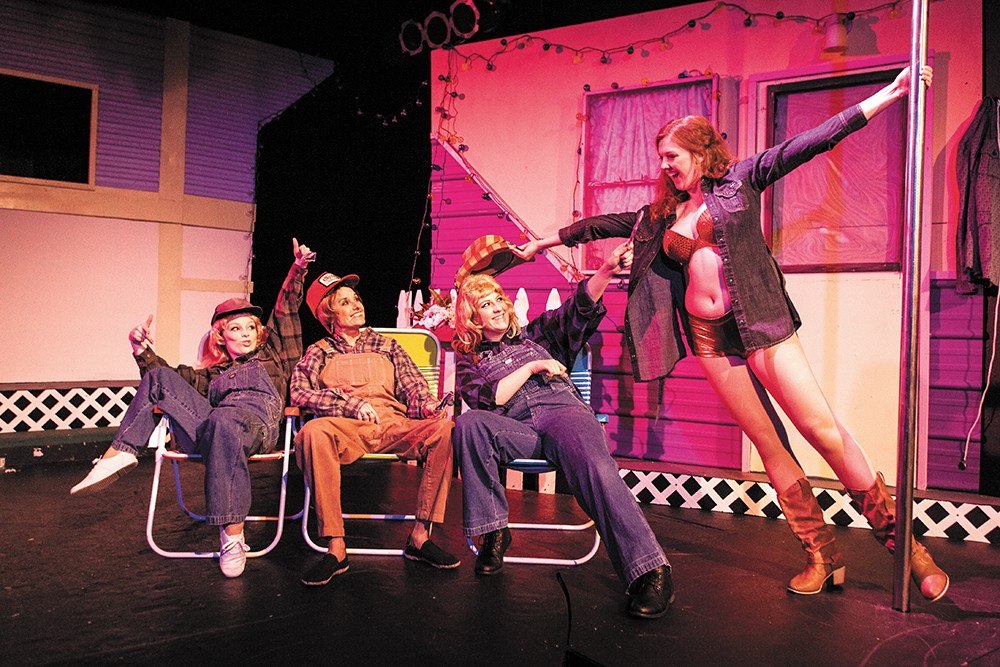 When The Great American Trailer Park Musical opens tomorrow at Lake City Playhouse, it will be almost six years to the month since the production launched its first national tour. In Spokane, of all places.

Director Andy Renfrew is aware of the connection — "It's kind of fun to know. How many shows out there started in the same neighborhood?" — but says that it wasn't a factor in Lake City's decision to stage the musical now.

More important was that Trailer Park is "such a fun show" with a tiny bit of risqué humor to it. "It's a show that you just actually sit back and you're able to laugh at," he says. "But we do have a stripper."

Mark Pleasant, a familiar face in madcap comedic roles on stages across the region, is playing Norbert; audiences might recognize Jordan from Lake City's staging of Rent.

"They are high school sweethearts," explains Renfrew. "Things happened at the beginning, so she's been holed up in her trailer for the past 19½ years. That's where the show opens. We have some flashbacks going back to the '80s, and those flashbacks tell you where we are today and the reason why she's been in her trailer. So Norbert seeks out some love and affection from somebody else, who just so happens to be the stripper.

"Every single [actor] has brought a character to the table that is just absolutely hilarious. At every rehearsal I'm laughing hysterically. There's something about each one of them, and each actor has brought something amazing."

The musical's humor isn't supposed to come at the expense of these characters, but rather the redneck that Renfrew thinks might be lurking in all of us.

"Some parts you're going to be like, 'I can relate to that,' and some people will know somebody they can relate it to," he says. "Honestly, it's reality, it's true life. It may not be something everybody wants to admit, but there's more than likely a little bit of each one of these characters in each person. I think there's a truth behind it, but it's at a time when you can sit there and laugh about it."

Then there's the music, overseen by Zack Baker. Trailer Park's songs raid a whole host of genres for their inspiration. "I absolutely love 'Storm's A-Brewin.'' It's all set to 1970s disco, so it's got that whole feel and vibe to it," says Renfrew. "Even the costumes are '70s, and it's just really upbeat and fun.

"There's something about each song that's quite enjoyable. We've got 'Flushed Down the Pipes,' where you're singing about your whole life being flushed down the toilet. 'The Great American TV Show' is fun because it's literally a show inside of a show."

One of the main reasons audiences warm to Trailer Park is because they feel a part of the action. "Betty is the narrator of the show, and she literally talks to the audience and keeps everything going. So you don't have the fourth wall," Renfrew says. If that audience implication adds to the sense of reality, then by his reckoning, it also adds to the fun. ♦