We drink all of the area's biggest, stupidest drinks so you don’t have to. 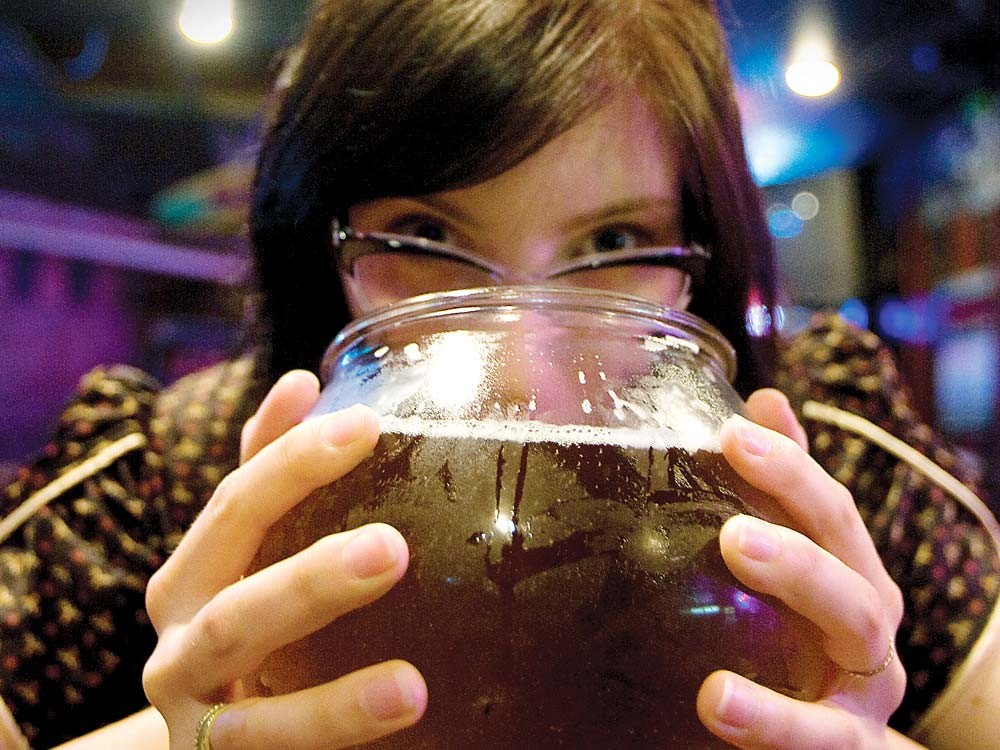 Kevin Quinn
Yes, you are seeing that right. It's a fishbowl of beer.

I am so hungover. Don’t ask me why, but for some reason, I decided to seek out the most ridiculous drinks our area has to offer. The sugary, Technicolor, over-sized beverages of the Inland Northwest. You don’t need to consume alcohol in this manner. But sometimes, you need a little elaborate self-indulgence in your life. And it’s best to be educated about this stuff. I went all over this region drinking these silly drinks. And here’s what happened to me because, in the name of relevance, it could also happen to you.

IF YOU FINISH IT, YOU’LL FEEL: Unable to operate a motor vehicle; like singing in front of others; better about your past relationships

WHAT HAPPENED: At the Iron Horse in the Valley, there is a dude rocking out on a keyboard, covering “Superman” by 3 Doors Down. I order a Derailer without knowing anything about it, other than that everyone I asked about it had advised me not to drink one. I see the bartender pull out a wine carafe the size of my forearm. (I have long arms.) Then, I see her begin to dump booze into it. I receive my drink and give it a stir with a straw that could double as a snorkel, and I cough. The fumes from the booze have stung my nose; I become nervous.

Different versions of the Derailer are offered at various places, but the one from the Iron Horse came recommended. It’s made with dark rum, light rum, sweet and sour, pineapple juice, Squirt, and orange juice. Of the few other patrons joining me that night at the Iron Horse, there was a man who said sometimes, when they drink these, womenfolk get naked. One lady admitted to drinking the Derailer tonight because her recent ex-boyfriend had just become “Facebook official” with someone else. We stared into our giant drinks as we quietly sipped.

IF YOU FINISH IT, YOU’LL FEEL: Sentimental; prone to repeating the name of the drink but with more of an “x” sound at the end

WHAT HAPPENED: “Hover! Hover! Don’t sit on it!” yelled some dude, who decided to open the door to the women’s restroom at the Star bar and dish out some unsolicited advice to me. I had been so distracted price-checking the “Intimate Pleasure Oils” dispensed in the machine across from me, I had totally forgotten about that whole hovering thing.

When this situation looked to be in grave decline, I had a Lunch Box — one of those drinks that couldn’t have possibly been conceived with actual science or common sense. A pint glass mostly full with cheap lager, like Coors Light, is topped off with some orange juice and finished with a shot glass of amaretto dropped directly into the glass. It tastes like Dr. Pepper Lip Smackers, but the floating shot makes the drink get slightly sweeter as you go. It kind of smells like a lunch box, too — bready from the Coors, fruity from the orange juice and a little sweet from the amaretto.

Me after the ladder

IF YOU FINISH IT YOU’LL FEEL: Pain; self-loathing

WHAT HAPPENED: Apparently the record for finishing this drink cycle is somewhere around 18 minutes. That is completely horrifying considering that it comes served in five steps: a 64-ounce fishbowl; then a 32-ounce tub; then a 22-ounce mug; next a 16-ounce pint; finally, a 10-ounce cup. It’s all your choice of beer, ranging from cheap-cheap to pretty cheap brands.

I picked Coors Light and got started. The spirit of this drink is better represented by selections from the notes I took that evening. Mostly because I can’t really explain some of this stuff now.

That night, I finished the fishbowl and the cup but got help with everything in between. The next morning was still awful.

IF YOU FINISH IT, YOU’LL FEEL: Confused that you didn’t taste it, though still aware you just drank a lot of booze; love for Mama

WHAT HAPPENED: Until she opened the bar, Mama had never said a single bad word in her life. She was a schoolteacher, but now this tiny Thai woman (who refers to herself only in the third person) has a mouth like a trucker. It’s not offensive. It’s delightful.

Mama treats the bar like home and customers like family, remembering details about every person who comes in. Especially the customer responsible for her now famous drink: the Mama Num Num. The guy showed up, she says, on his 21st birthday with upwards of 40 of his friends.

“He called me ‘miss.’ … He said ‘Miss, I want to get f---ed up.’ That’s exactly what he told Mama,” says Mama. “I said, ‘Alright son, I’ll get you f---ed up.’” He wanted something fruity, so she mixed together Hennessy cognac, watermelon Pucker, 7UP and some cranberry juice. She went through seven bottles of Hennessy and five bottles of watermelon Pucker that night. And while one Num Num packs a lot of booze, it won’t do you in. What will, though, is staying to party with Mama, as you will inevitably do. But don’t worry. She’s got your back.

“When you get drunk with Mama, Mama take care your drunk ass,” says Mama in her regular tone, which is like a controlled yell.

I love this woman. She says she loves me, too.