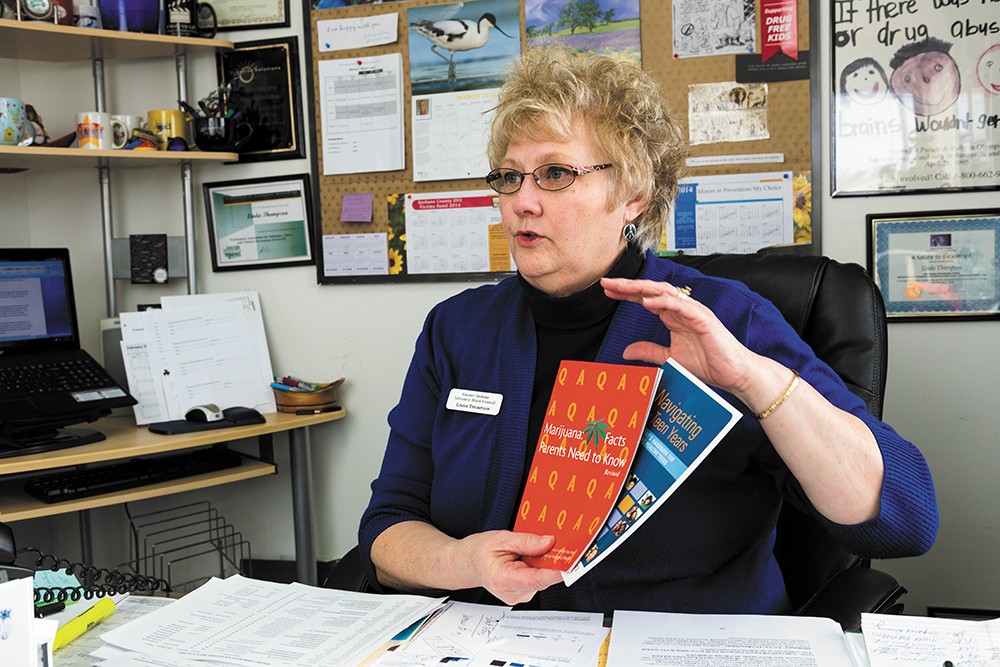 It probably seemed like a normal chocolate bar. A student at Riverside High School north of Spokane received the tasty treat from a 15-year-old classmate in early March. Only after he had eaten the entire candy bar, investigators say, did the classmate mention the chocolate had been laced with marijuana.

The drugged student went to the hospital as a precaution, testing positive for psychoactive THC, while his deceptive classmate suffered an immediate expulsion from the school. He may also face criminal charges.

Linda Thompson, executive director of the Greater Spokane Substance Abuse Council, says she continues to hear more of these types of unsettling stories from school officials and parents as the state moves toward legalization — bringing with it new retail stores, advertising and easier-to-hide infused products.

School administrators, including some at middle schools, have told Thompson they already see more students experimenting with marijuana, particularly with edible forms such as candy, drinks or the notorious brownie.

"The edibles are a great concern," Thompson says. "How are [parents or teachers] going to know if that's a brownie from home ... or a brownie with marijuana in it?"

Which of these gummies are infused with THC? (The answer is at the end of the story.)

Following the extended public opinion debate over marijuana legalization, Thompson says more and more teens see marijuana as a safe drug. Studies show their "perception of harm" has dropped as marijuana supporters have pushed to decriminalize and destigmatize recreational use.

"They are getting a mixed message," she says. "If adults are going to choose to do that, it's their right, but we want to protect children. ... It's not healthy for a young person to smoke marijuana."

Research on the developmental effects of marijuana on young minds remains limited. But a number of studies suggest the growing teenage brain may suffer harmful delays or restructuring with early marijuana use. A 2013 study from the University of Maryland suggests marijuana use, like alcohol, poses much different dangers to children than it does fully developed adults.

The Maryland study exposed juvenile mice to low doses of THC for 20 days and then allowed them to continue developing naturally. Upon dissection, the drugged mice showed "gross" alterations in brain structure as well as impaired behavioral performance. However, adult mice exposed to the same dosage did not have the problem, nor did unexposed young mice.

"Long-term cognitive impairments and elevated risk of psychiatric disorders in regular marijuana users are less pronounced when use is initiated in adulthood, instead of in adolescence," the study concludes.

A 2012 study from Duke University, based on a survey of 1,037 people, also offers evidence that regular youth marijuana usage may reduce lifetime IQ levels. When comparing IQ at age 13 to 38, researchers found individuals who started using marijuana at a younger age saw their IQ drop by up to 8 points. The more they used, the greater the deficit.

Researchers also say the results suggest the delayed brain function appears permanent. Even people who stopped smoking as adults could not restore the lost brain function. Other studies have made tentative links to marijuana use causing brain restructuring similar to schizophrenia.

With some studies disputing that finding and suggesting that the IQ results may stem from other factors like socioeconomic status (or that marijuana can get you kicked out of school), a definitive verdict on the risks of youth marijuana usage remains elusive — particularly when considering the often higher concentrations of THC in modern cannabis or infused edibles.

But much of the consensus seems to lean toward the same conclusion: If you want to use marijuana, it's safer to wait until adulthood.

Thompson says funding for substance abuse prevention has declined just as legalization has gone into effect. Only two local high schools, East Valley and North Central, still have intervention officers to speak with students about drug abuse. She says she regularly fields calls from parents looking for help educating their children about marijuana legalization.

"This is all new territory," she says, adding, "I personally think it's going to be devastating."

Chris Marr, a member of the state's Liquor Control Board responsible for writing new regulations on marijuana legalization, says state agencies consider the prevention of youth marijuana use a high priority. New licensing regulations impose severe consequences for even allowing a minor in a store. Furnishing marijuana to a minor constitutes a felony.

"The rules lay out some pretty harsh penalties," Marr says, noting fines quickly jump to a 30-day suspension, then revocation of license.

Marr explains that new marijuana regulations also require childproof packaging as well as prohibiting the use of cartoons or youth-targeted advertising. As far as tracking supply, the system has instituted a wide variety of safeguards to monitor marijuana from growhouse to retail shelf.

The biggest challenge, similar to alcohol, will be keeping adults from illegally passing along or selling marijuana to minors, he says. The Liquor Control Board can't mandate personal integrity — that requires individual responsibility from parents, family members and friends.

For information on youth drug abuse prevention contact the Greater Spokane Substance Abuse Council at (509) 922-8383. The cola gummies are THC-infused.