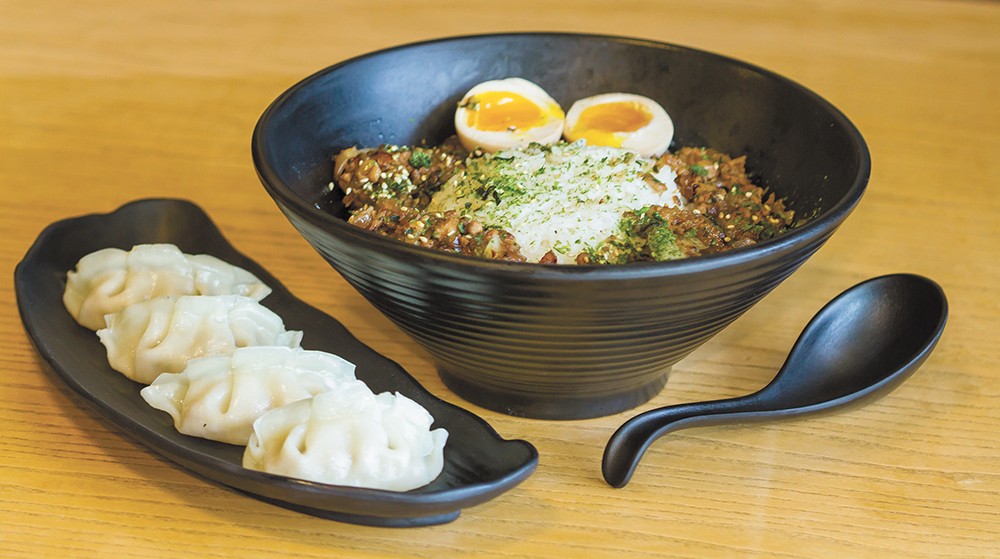 Jeff Ferguson
King of Ramen's flavors are big and bold.

when they thought a hot bowl of ramen would be just the thing to help take the edge off a frigid night. Back home in Los Angeles, satisfying that craving would be easy.

"We have ramen restaurants all over town, from hipster ramen to traditional to fusion, just all sorts," Pan says via email. The lack of options on their visit inspired Pan and Weng to move north and open a traditional Japanese ramen house in late June.

The savory smell hits you first when you walk into the space that quickly makes you forget you're in a Division Street strip mall. A long bar lets diners hunker down over the large, steaming bowls as they watch the cooks, while tables sit underneath walls decorated with Japanese art like calligraphy and origami.

But back to that smell. It comes from the delicious pork and chicken broth Pan says is made daily and boiled for hours with all-natural ingredients and seasonings — no MSG added. This is Hakata-style ramen, Pan says, "where the noodles tend to be thinner," and each bowl comes with chashu, a Japanese-style pork. Strict vegetarians will have to stick to side dishes like edamame, spring rolls and cabbage salad as their friends enjoy bounteous bowls of noodles.

"We want to focus our attention on ramen instead of other Asian-fusion items," Pan says. "This is like ramen restaurants in Japan; they will only sell ramen."

There are several items on the menu that diners can add to customize their soup, including sweet corn, fried garlic and pork belly, and there are condiments on the tables for those desiring a little spicy kick to their broth.

On my visit shortly after King of Ramen's soft opening, I tried the Spicy Tonkotsu Ramen ($9.50), made with pork bone broth and spicy miso, and it was filling and delicious. The spring rolls ($4), unsalted edamame ($3) and unsweetened Iced Green Tea ($3) were satisfying as well. Beer and sake are available.

As luck would have it, I chose Weng's favorite ramen as my first meal at his shop. When I asked him to describe what he likes about it, his words came slowly, blocked a little by the language barrier, and also by the complexity of the flavors in that broth.

"I would describe it as ... incredible," says Weng, who manages the day-to-day operations of the kitchen. "I personally just really love ramen." ♦