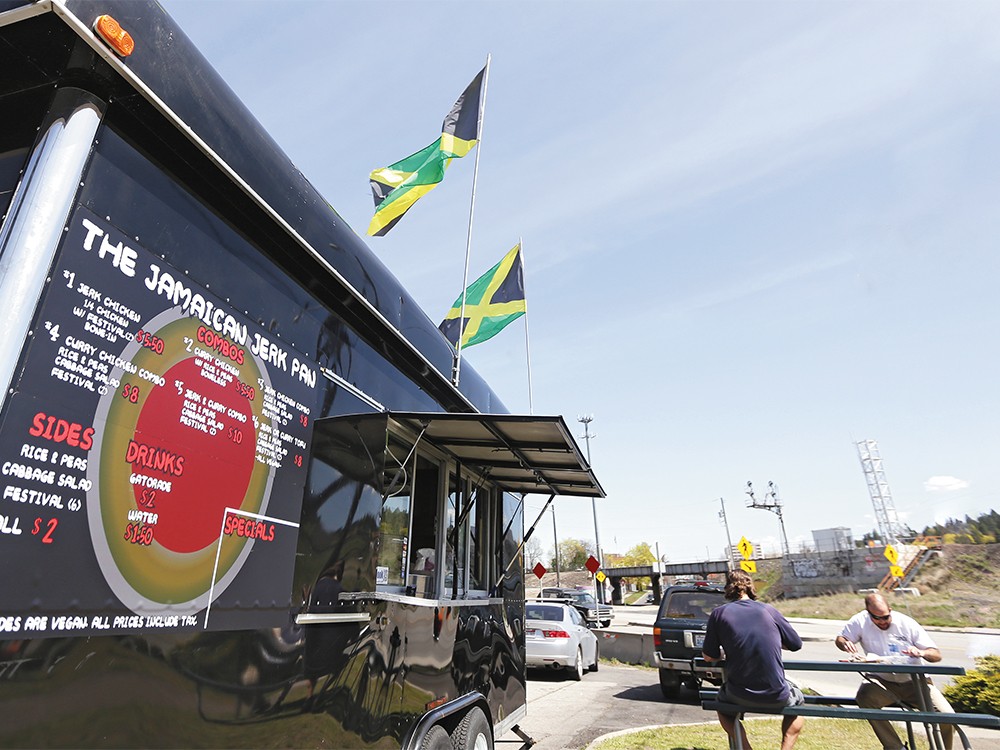 When someone in Browne’s Addition complained that the Jamaican Jerk Pan food trailer was parked in their neighborhood, owners Sabrina Sorger and Roian Doctor felt overrun with city inspectors.

One came to tell them the area was residential and they couldn’t be parked there, but later realized it was actually commercial. Another came to enforce a provision of their food service license that mandates trucks and trailers like this move every 10 minutes, but then backtracked. The third scolded them for having an extension cord that crosses the sidewalk between their trailer and Cannon Coffee & Cone, but later allowed them to just mark the cord with bright spray paint to warn people it’s there.

“Each one told us something different,” Sorger says. “I get it, they don’t have a process for this. I get why they want to reinvent it.”

Amid confusion and blurry enforcement of some aspects of food truck, trailer and cart operation, the city has no way to regulate others at all, so it’s looking at how to change the rules. But that’s worrying people like Sorger and Doctor, a Jamaican native the regulars call “Doc” who serves up spicy curry and jerk chicken with rice. They know change is necessary, but they’re worried about the red tape and price tags that could come along with a reinvention.

As part of its Mobile Food Vendor Project, a team of city staff is working to make the process of opening and operating food trucks easier. They’re seeing an increased interest in food trucks and carts from both individuals and entire business districts.

“We’re woefully underserved for food options,” says Jack Strong, a business owner and president of the East Spokane Business Association, advocating for the East Central area that stretches out to the Valley. “For a business district like this to fully revitalize, it needs to be that sort of destination, like a food destination like we’ve seen in the Perry District.”

Strong hopes to help the city find areas suitable for food trucks in the area and then work to attract mobile food vendors to those locations.

As it stands, the city has no specific regulations or zoning explicitly for food trucks. Mobile vendors are regulated under the city’s “itinerant vendor” category, which applies to any type of mobile vendor, and are allowed anywhere other food services are, though there’s no explanation in city code of how to deal with things like hours of operation, obstructed pathways or whether mobile vendors should be required to develop unused land the way brick-and-mortar restaurants are. One especially clumsy rule states that vendors are only allowed to stay in one spot for 10 minutes at a time if they’re in the public right of way, like an on-street parking space selling onto the sidewalk. That’s fine for the ice cream man, but nearly impossible for a taco truck.

“What the City of Spokane has decided is to be proactive, to look at current regulations. What do they allow and how do they work in light of the modern mobile food vending industry?” says Andrew Worlock, a city planner heading up the project. “What we’ve found is they don’t really work that well.”

At an open house about the issue last week, the soft-spoken Worlock stood in front of a room of current and hopeful food truck owners peppering him with questions and complaints about the process. While health regulations will remain largely untouched, the city is considering a new system for licensing. Under this new plan, vendors who only operate at special events would get a basic license. Those who sell from various places throughout town would purchase “add-ons” for each location where they want to park and sell. (Costs for the licenses haven’t been established yet.)

The idea brought outbursts and hushed one-liners from the food truck owners. They’re worried the extra licenses will bury them in more time-consuming inspection processes and stretch their already tight budgets. Worlock is empathetic, but says the city and the Spokane Regional Health District have to know where vendors are going to be to keep up on the rules and perform the district’s yearly unannounced inspections. With more food trucks on the street, he says, the city has to have better ways to regulate them, and that costs money.

Since the meeting, Worlock says the group is considering only requiring sites to be approved once, so multiple vendors aren’t paying to approve the same spots. Ideally, vendors say, the city would just approve a swath of locations and tell them where they are and aren’t allowed to go. But Worlock reminds them someone has to shoulder that cost.

“I have a feeling it’s going to be impossible for us to follow the [new] rules,” Sorger says at a green plastic table outside the Jerk Pan trailer. “You can’t regulate spontaneity.”

In the front row of the open house, one of the voices flinging questions at Worlock sounds less defensive.

Aaron Crumbaugh owns a food truck in Chicago where he serves wagyu, high-end beef that originated from Japanese cattle and is now raised in the U.S., and he’s in the process of moving to Spokane. With a background in fine dining, Crumbaugh was at the meeting to learn about Spokane’s rules, but says he’s confident in his plans regardless of what changes the city makes.

“Spokane is, I think, much easier to deal with,” he says. “Chicago is a nightmare. Really, any big city that’s starting to accept the food truck idea [makes it] very challenging because there’s a lot of political pull for restaurants and property owners.”

Between new restaurants and the onslaught of local craft breweries, Crumbaugh says he’s been impressed with Spokane so far and he thinks his truck, which he’s dubbed the “Wagyu Wagon,” will do well here, no matter the fees or regulations. Starting a business is difficult and scary, he says. Food truck hopefuls shouldn’t let an extra layer of oversight scare them off.

“People here are used to being able to do what they want to do,” Crumbaugh says of the West, “and all of a sudden the city’s saying, ‘Slow down here. These are new to us.’ “