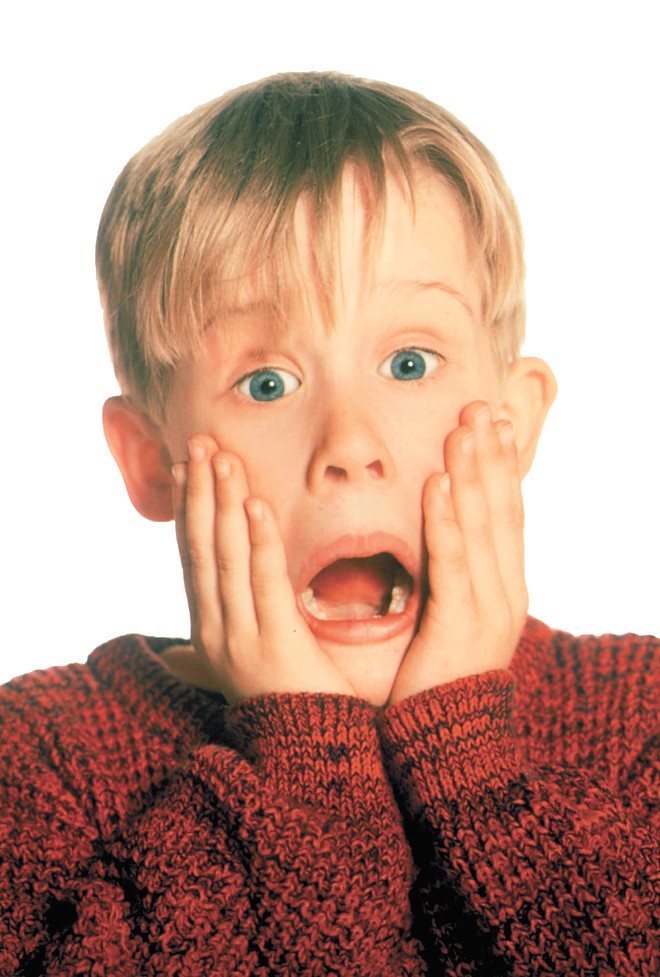 It's every kid's fantasy: Your parents leave the house and let you stay behind, and you have the entire place to yourself. You can watch whatever you want on TV, you don't have to pick up after yourself, and you can order as much pizza as your adolescent heart desires.

Home Alone, released 30 years ago this month, channeled those childhood fantasies into a predictable family-friendly package, and in doing so, it became one of the most successful movie comedies of all time.

Written by John Hughes, who was coming off such sacred Gen X texts as The Breakfast Club and Ferris Bueller's Day Off, the film centers on the precocious Kevin McCallister (Macaulay Culkin), who's left at home while his massive extended family hops on a Paris-bound plane. It's a free-for-all at first, but then two crooks known as the Wet Bandits (Joe Pesci and Daniel Stern) show up, taking advantage of the empty neighborhood and robbing houses. They meet their match in little Kevin, who reveals himself to be a mini sadist as he sets up a series of hilariously elaborate booby traps to take them out. Meanwhile, Kevin's harried mother (the great Catherine O'Hara) tries desperately to get home in the midst of the Christmastime travel rush.

It would be an understatement to call Home Alone a commercial success. Opening the week before Thanksgiving 1990, it topped the American box office for 12 straight weeks and remained in the top 10 until April of the following year. Culkin, who had stolen scenes in Hughes' Uncle Buck, became an instant superstar. Director Chris Columbus, whose biggest hit prior to Home Alone was 1987's Adventures in Babysitting, would go on to more blockbusters, including Mrs. Doubtfire and the first couple Harry Potter films.

Like just about every '90s kid, I loved Home Alone when I was a part of its target audience. I aspired to be as resourceful as Kevin McCallister. I was jealous of his collection of gadgets. I wondered if I would be as capable in a similar situation. I related to the fact that, despite being the most intrepid kid in all of cinema, he was still afraid of the boiler in the basement.

Home Alone's popularity, of course, demanded a sequel. 1992's Home Alone 2: Lost in New York found Kevin getting separated from his family again, this time in the Big Apple, where he uses his father's credit card to book a suite at the Plaza Hotel (then owned by Donald Trump, who famously makes a cameo).

It's the same movie, albeit in a different city. Kevin is left behind, manages to elude capture by using his wits, encounters a creepy adult who turns out to be friendly (in this case, Oscar winner Brenda Fricker as a Central Park pigeon lady), inexplicably crosses paths with Pesci and Stern again, slapstick violence ensues, etc.

Lost in New York was, predictably, a big hit, but it grossed a fraction of the original's take (its domestic gross was $173 million compared with the first film's $285 million). It simply couldn't eclipse its predecessor. Hughes continued to ape Home Alone's success for the rest of his career, pivoting from teen films to more kid-centric fare and regurgitating his own formula multiple times: His scripts for Beethoven, Dennis the Menace and Baby's Day Out all featured scrappy tykes outsmarting bumbling crooks.

Surely it was kids who drove Home Alone's enduring box office success in the first place, though a number of grown-up critics at the time of its release were baffled by its success. When Gene Siskel and Roger Ebert reviewed the film on their popular TV show, they panned the movie and suggested it would have been better if it had been a whole lot more realistic. A few months later, they'd revisit the film to examine the movie's unexpected popularity.

"We're living in troubled times right now," Ebert suggested, "and Home Alone offers the exact opposite of the headlines on the news." How often have you heard that exact sentiment during the hellscape that is 2020?

And yet Home Alone doesn't really work for me as an adult. In fact, I now agree with Siskel and Ebert: The burglar scenes, the parts I enjoyed most when I was a kid, are more painful than funny, as a psychotic Joe Pesci has a swinging paint can smashing into his face. It's filled with maddening implausibilities, too: You're telling me that the police were notified about a little white boy living alone in a giant suburban house and they essentially just leave him be?

But it's that sense of wish fulfillment — the idea that you, as an 8-year-old, could function as your own babysitter — that made Home Alone such a sensation in the first place, and why it's still a touchstone for millennials. It's a movie for kids that happens to be written with kid logic. ♦