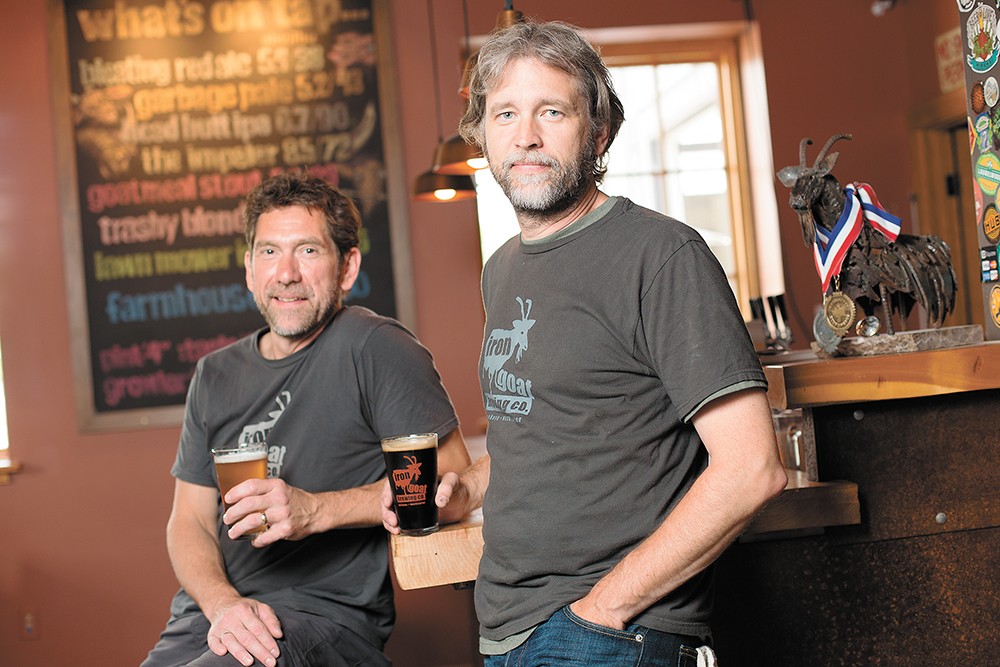 Young Kwak
The loss of Iron Goat co-founder Paul Edminster (right) is being felt through the region.

There's a lot of heartache

Last week, as the news trickled out, many local breweries and craft beer venues took to social media to express their shock and sadness at what they had learned: Paul Edminster, co-founder of Iron Goat Brewing, had passed away on Saturday, Sept. 30. Complications of his fight with cancer had taken his life at the age of 51.

In an instant, the realization of loss rippled through Edminster's family and friends. His two children had lost a father. His wife, fellow brewery co-founder and visual artist Sheila Evans, had lost a husband. Fellow Iron Goat co-founders Greg and Heather Brandt had lost a friend, business partner and collaborator.

I had lost a mentor.

I first met Edminster in the summer of 2012, shortly after Iron Goat's original taproom location had officially opened in East Spokane. I was instantly a fan of both the beer and the people there, and as a burgeoning homebrewer, I was eager to probe the minds of brewers who had just gone pro. Not only was Edminster open to sharing brewing techniques and beer recipe information with me, he was also willing to try my homebrew and offer me feedback. His kindness and encouragement only furthered my passion for beer making, which has taken me from hobby to a varied career in the beer industry.

Years later, Edminster and Greg Brandt would hire me to join the brewing team at Iron Goat. Edminster's lessons continued. A true tinkerer, he would teach me the value of research when attempting to try something new at the brewery, or in troubleshooting a problem. He would share stories of his time spent in the Navy as a nuclear machinist to serve as a reminder of why I should always wear gloves, safety glasses or proper footwear. His smart-ass, playful nature came through in every response he gave to my questions, which taught me the importance of never taking your job too seriously.

But perhaps the biggest lesson Edminster gave to me came after his death. And it only became clear to me after I observed the effect his passing had on the brewing community around him.

"As we ventured down our own path to becoming a microbrewery in Spokane, we frequented Iron Goat to ask Paul any and all questions about this magnificent feat and challenge, which is opening a brewery," read a post on Black Label Brewing's Facebook page the Monday after Edminster's death.

"Not only was he kind and welcoming to us, he also spoke openly and shared at length (to his future competitors) Iron Goat's own trials and struggles; Paul never steered us wrong."

Other local brewers and business owners also publicly shared their memories of Paul's kindness and eagerness to help others in the industry. Within a day after Iron Goat released an official statement on Edminster's passing, establishments like River City Brewing, Whistle Punk, Nectar Wine & Beer, and the Observatory were holding benefit nights to help raise money for a GoFundMe account Brandt had set up to benefit Edminster's children. Even the local homebrew club, Inland Brewers Unite, collected donations for the fund, honoring Edminster's support of the homebrew community.

The Spokane craft beer scene is a tightly knit community, and they've come together to remember one of their own. And therein lies Edminster's last lesson to me: A man whose passion was heavily rooted in the craft of beer making showed me that beer is more than just a beverage. Beer is a conduit through which friendships and communities are formed. It is the center hub in which many valuable memories are created. Beer is family; ultimately, beer is love.

Edminster will be missed greatly by all those whose lives he touched. But he will live on through his children, through the brewery he helped start and the beers they make, and through the lessons he taught me.

I will remember him with every pint I drink. Cheers to you, Paul. ♦

Adam Boyd is an assistant brewer at Iron Goat Brewing and the director of the Spokane International Film Festival, among many other creative pursuits in both film and brewing.

Donations to the memorial fund set up for Paul Edminster's children can be made at GoFundMe.com/Paul-Edminster.