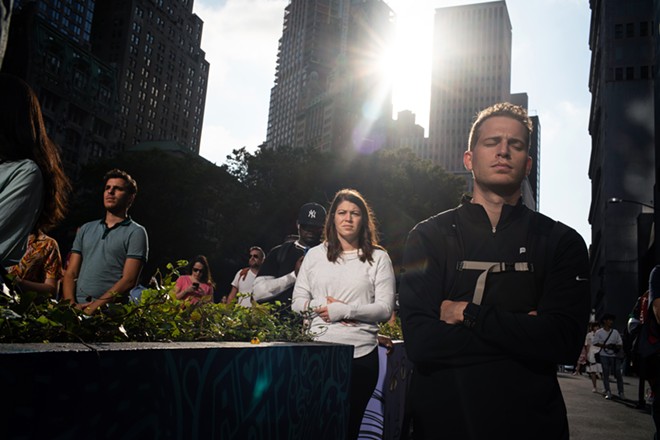 Todd Heisler/The New York Times
Passersby stop to observe a moment of silence on Dey Street, near the 9/11 Memorial in lower Manhattan, on Thursday, Sept. 11, 2019, the 18th anniversary of the Sept. 11 terror attacks.
By James Barron
The New York Times Company

Eighteen years have passed since terrorists commandeered airplanes and the twin towers of the World Trade Center were brought down.

The commemoration at ground zero — by now an annual rite of remembrance that follows a familiar, somber script — began with an honor guard carrying the flag.

At 8:46 a.m. Wednesday, the time when the first plane slammed into the north tower, there was a moment of silence, the first of six marking the strikes at the trade center and the Pentagon, and the plane crash in Shanksville, Pennsylvania, as well as the collapse of the twin towers in a blizzard of toxic dust and flaming debris. Bagpipers played “America the Beautiful.”

At ground zero, readers began reciting the names of the dead, one by one — brothers, sisters, cousins, mothers, husbands, wives. Some family members brushed away tears as the names were read. Some carried flowers or wore T-shirts with names. Some held placards above the crowd with images of their loved ones. And others who attended said they had their own traditions that they followed.

Margie Miller, whose husband, Joel, died, said she always goes to the place at the memorial where his name is engraved. She touches it tenderly. He was 55 when he died. He was an assistant vice president at Marsh and McLennan, the management consulting firm. His office was on the 97th floor.

“This is his place, and it’s my place,” Miller said. “It’s where I feel him. He breathed here and he died here.”

La-Shawn Clark said this anniversary was a particularly difficult one because her husband — Benjamin Keefe Clark, an executive with Fiduciary Trust International who was 39 and whose office was on the 93rd floor of the south tower — cannot share a milestone, the birth of their first granddaughter, due next month.

She said that the memorial was where she sensed his presence the most. “There’s never closure,” she said, “but when I come here, when the wind blows, it’s like he’s kissing me.”