Shann Ray has written a great American novel, and that might not even be the most impressive thing about him 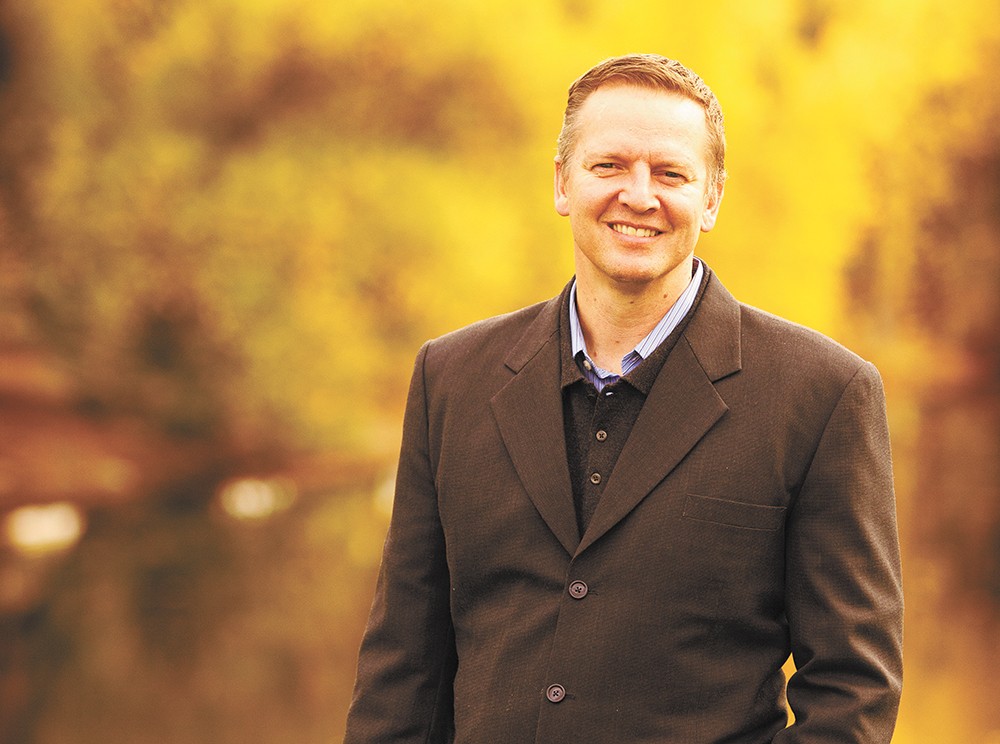 and you'd think that there might be at least a hint of apprehension or nervousness emanating from the author when he sits down for a beer at a neighborhood brewery. It helps that the book, American Copper, has already received glowing reviews from Esquire magazine and Library Journal, and been praised by fellow writers including Sherman Alexie and Dave Eggers.

But really, it could be argued that publishing an acclaimed novel isn't even the most remarkable thing that Ray (whose actual name is Shann Ferch) has done in his 48 years. He's still one of the greatest basketball players ever to come out of Montana and had a stellar college career. He even played professionally in Germany for a while. But then Ray became a marriage and family psychologist, and that became his life. Eventually, he started teaching at Gonzaga as a professor of leadership and forgiveness studies. And then, about 15 years ago, he took up writing.

"I think it looks weird from the outside. It looks like I'm doing all these things, but in reality it sort of unfolded in small steps," says Ray. "I do love silence, quietness, wilderness, but I'm also into 10-year projects."

He's serious about that. Becoming a skilled point guard who could shoot the lights out from three-point range and drive the lane for a dunk was his first long-term pursuit, and taught Ray the worth of slow, deliberate focus.

"Basketball taught me about deep discipline and being precision-oriented. And with everything else, I think I've always loved the long journey of studying," says Ray.

American Copper is the result of another long-range pursuit, one that Ray began first by writing short stories for his counseling clients, stories that were essentially healing parables. That took him to a slow-burn MFA at Eastern Washington University, where he chipped away at the degree while still teaching at Gonzaga and continuing his counseling practice. But the book is not divorced from Ray's other areas of interest. It's heavy, if not almost singular, regarding the notion of forgiveness, and it's also thick with family struggles.

The novel, set in Montana between the 1860s and 1930s, brings together seemingly divergent characters and their experiences in the booming new West of the time. There's the daughter of a copper baron, a brawny bull rider and a Cheyenne cattle roper who comes from a line of peace chiefs. The first section is an enthralling yet brutal read. There's family loss and personal struggle, but the most lasting images are Ray's description of the Sand Creek Massacre, a real-life event in 1864 in which as many as 163 Cheyenne and Arapaho villagers — at least two-thirds of them women and children — were brutally murdered and mutilated by a Colorado Territory militia.

"I wanted this to be a love song to Montana, but also to the nation, to say that inside our amnesia and deep atrocities, we can find forgiveness," says Ray.

The forgiveness in American Copper is gorgeous and beautifully wrought, as these characters, all with their own baggage and pain, come together. The writing evokes the greats of the Western genre, as do the lengthy, pastoral passages Ray delivers about long horse rides into the hills, and the influence of the early railroads, and all the good and bad that was required to build them. It's a Western, for sure, but Ray thinks it's more than that.

"I wanted to disrupt and fracture the Western genre with postcolonial thought, because we have this colonial amnesia, especially when it comes to white-privilege community," he says.

Although his studies and academic writings prepared him with ample historical background, Ray nevertheless found himself buried in research in order to make American Copper a reality. He dug into the history of copper mining and that of Butte, Montana, the fascinating and sin-laden Western boom town with an abyss-like mine that was providing as much as 60 percent of the world's electrical conduit.

"There was a ton of research. It's a bigger project, to be as honorable as you can to all the things that have gone on," he says.

To celebrate the novel's release, Ray has called in Alexie, the Spokane native and literary superstar (and funniest stand-up comedian who isn't actually a stand-up comedian), to host a show at the Bing Crosby Theater. Accompanying readings of the book are musical compositions from the novel's era, played by a group that includes Ray's wife, Jennifer. He hopes that helps the audience get a more complete feel of this big, full-hearted book.

"I think there's a certain grace involved in anybody reading anybody else's work. The writers I know are always so thankful of the connection between writers and readers," says Ray. "I feel art in its central essence is about love and connection, intimacy." ♦

John Darnielle's ability to tell a story through song translates onto page in his new book, Devil House