Inside the courtroom, as judgment is handed down in Zehm’s death 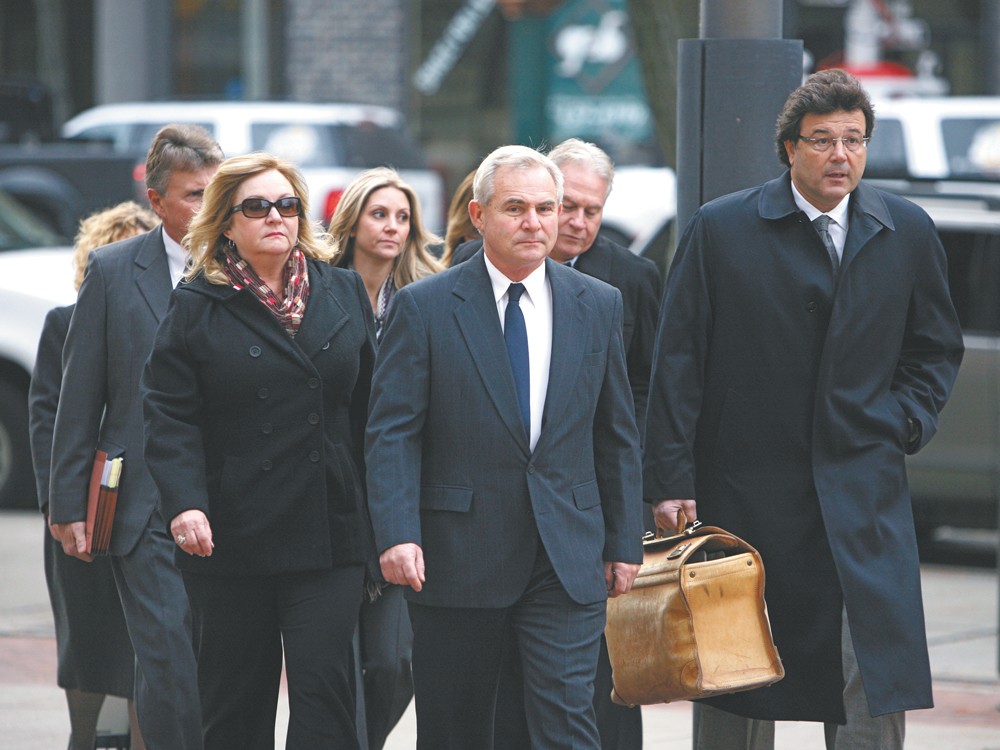 When Karl Thompson steps through the double doors of the U.S. District courtroom, his attorneys and supporters spill in alongside him. His family and friends fill the front row. Former co-workers nod respectfully as he takes his seat.

Once a decorated war hero and police officer, now, on Nov. 15, Thompson sits in a defendant’s chair. Absent are his medals and badge. He wears a dark blue tie and a slight frown. He folds his hands. His trial, conviction and disgrace behind him, he awaits judgment.

Across the aisle sit the survivors of Otto Zehm, an innocent man killed at the hands of sworn protectors. Remembered as a kind and generous janitor, he now lives on as a painful symbol of police excess.

To one half of the courtroom, Thompson is a martyr. To the other, he is a murderer. All take their seats.

Under fluorescent lights and the high bench of Judge Fred Van Sickle, reporters and other onlookers gather to hear Thompson’s fate. The bailiff calls from the corner of the room.

Zehm, 36, with long reddish hair and a history of mental health issues, loved to play guitar. He also enjoyed his work, old acquaintances say, often smiling as he cleaned offices at Fairchild Air Force Base. He usually brought in a two-liter bottle of Pepsi to drink at work.

On March 18, 2006, Zehm passed an ATM and startled two teenage girls who were using the machine. Court records indicate the girls drove away and called police, reporting a possible theft. Meanwhile, Zehm just grinned into the machine’s camera and continued on to the Zip Trip convenience store near Division and Augusta Avenue.

Thompson, a Vietnam veteran with 36 years in law enforcement, heard the report from girls’ 911 call over the radio and quickly responded.

Surveillance video from inside the Zip Trip shows Zehm casually walking the aisles, selecting a bottle of soda and scanning the candy racks. Thompson entered soon after, drawing his police baton as he approached.

Thompson, 65, stares unblinking as Assistant U.S. Attorney Timothy Durkin argues before the court on Thursday. Durkin asks the judge to find that Thompson committed aggravated assault with a deadly weapon and holds up a long, straight baton fashioned of dark wood.

Thompson developed an affection for the antiquated baton — as opposed to a newer side-handle nightstick — during his 10 years with the Los Angeles Police Department.

Citing expert testimony from Thompson’s federal trial, held last November in Yakima and in which Thompson was convicted of excessive force and lying to investigators, Durkin says the baton was used in an unprovoked and unreasonable manner on that night in 2006.

“Officer Thompson knowingly utilized force that was likely to cause serious injury or death,” he says.

Durkin, wearing a light gray suit, holds the long baton over his head as he describes its brutal capabilities: “You use this baton to break bones if necessary.”

Zehm had his back to the door when Thompson first entered the Zip Trip. Court records state Thompson rushed toward Zehm with his baton held ready. Zehm turned and, seeming surprised, started to back away as the officer moved in with his baton.

Four surveillance cameras recorded the scene as Zehm fell to the floor. Thompson continued to hit him with the baton as he ordered him to drop the Pepsi bottle.

Thompson eventually drew his Taser and fired down at Zehm, stunning him. A young girl nearby can be seen covering her ears as Zehm screamed and rolled on his stomach. Thompson grabbed Zehm’s leather jacket and swung again with his baton. Zehm tried to crawl away.

“At the end of the aisle, after shooting Zehm with his Taser and delivering 6-7 baton strikes to Zehm’s upper torso,” court records state, “[Thompson] sat down on top of … Zehm, who held his arms/hands clenched closely to his body.”

Soon other officers arrived and joined Thompson in trying to pin down the frantic Zehm. Another officer Tasered Zehm three times. They rammed their knees into his ribs and forced him to hold still. They hogtied his hands behind him and rolled him onto his stomach. Finally, they placed a plastic mask over his face.

His last words: “All I wanted was a Snickers.”

In court, defense attorney Carl Oreskovich tells the judge that Thompson never wanted to hurt Zehm. Thompson ordered Zehm to drop the bottle and stop fighting, but the struggle escalated.

“Mr. Zehm at no time complied with the commands,” the attorney says. “His actions are only to resist, to get away. … The intent of Karl Thompson was to do his job.”

Thompson used the force he felt he had to in order to get Zehm to comply. He is no “rogue officer,” Oreskovich says. The man in the defendant’s chair served as a distinguished officer and community member.

“This man before you is not a villain,” he says. “This is a man who has led an absolutely exemplary life.”

Thompson has always taken responsibility for his actions that night, Oreskovich argues. But no hard evidence links those actions to Zehm’s death, he says, arguing the tragic case has been twisted and politicized over the years.

When the sentencing hearing turns to Zehm’s family, his mother submits a letter to the court. She describes the curious and loving son she lost. She remembers him playing his guitar and calling her in the evenings.

“I think about Otto every day,” Anna Zehm writes. “I often cry for him.”

The family attorney reads her letter to the court because she rarely leaves home anymore. She writes of constant fear and devastation. She says she has forgiven Thompson, but still longs for an apology. Though he may face prison, he will see his family again one day.

“Otto is never coming back to me,” she writes.

Late in the afternoon, Thompson rises from his chair and steps before the court. He walks to the podium with a slow and disciplined gait. He pauses to acknowledge Zehm’s family.

“I’m deeply sorry for the loss of Mr. Zehm,” he says, his voice low and steady. “I’m also a parent. I know nothing equals the love of our children.”

Thompson maintains he did not intend to injure Zehm, explaining the tragic death that now defines his life contradicts everything he defended throughout his entire career in law enforcement.

“Mr. Zehm will always be a part of me,” he says. “I am and always have been responsible for my actions.”

When Van Sickle returns, the courtroom goes quiet. Even the hum of a laptop seems loud. The judge settles into the bench and summarizes the day’s arguments.

“This has been a long and difficult case,” he says, adding, “This is a tragic circumstance. There is no question.”

The judge commends Thompson on his impressive career, but rules in agreement with the aggravated assault allegations. The once decorated officer has also lied to investigators, shattering a city’s faith in authority.

In the front row, Thompson’s sister weeps into her scarf, wiping her reddened eyes. Van Sickle pauses and clears his throat. He shuffles papers.

“Whatever determination I make,” he says, “will be viewed by some as not severe enough and by others as too severe.”

The judge asks Thompson to stand and reads his sentence: Finding a middle range between the defense request for no jail and the prosecution recommendation of 11 years, Van Sickle orders Thompson to serve four years and three months in prison. Upon the completion of his prison sentence, he will face three years of supervised release.

As the hearing adjourns, two U.S. marshals click handcuffs around Thompson’s wrists. He walks out alone as his attorneys and supporters look on. He stares downward, saying nothing.

In the evening darkness, TV crews set up live shots across from the federal courthouse. Spotlights shine on rows of reporters. Thompson is transferred to a federal detention center as night closes on the case, six years after it first split the city.

Still, Spokane remains divided. Some call the sentence unnecessary and others call it a joke. Thompson’s fate goes to appeal and Zehm’s family still mourns.

But the family’s attorney, Breean Beggs, believes the city has moved a step closer to healing. The sentence sends a strong message and reaffirms some justice.

“Most of the family members I’ve spoken with felt it was long enough,” he says.

With a few compassionate words from Thompson and ongoing reform at the Spokane Police Department, he says, the family remains hopeful their tragedy can still help mend the community.

The following day, in a city park along Mission Avenue, teenagers horseplay in the falling leaves. Laughter carries over the wet grass. A jogger passes a stone picnic shelter where a plaque reads, “In Memory of Otto Zehm.”

A fresh bouquet of burnt orange blossoms rests against the stone as a low sun glows on the horizon, casting a half light over a broken city.